This provocative title comes because so many pundits are peering through the Crystal Ball to see how strong is Chavez advancing or how quickly he is retrograding. I say neither because I remember the words of former Speaker O’Neill (who probably got them from somewhere else) “all politics are local”. But it gives me the opportunity to indulge in writing about politics elsewhere, to refresh from the Venezuelan curse.

In Ecuador the pro Chavez candidate gets lashed

Of all the recent elections (since Peru anyway) the only one where there has been a clear Chavez effect is Ecuador. There we had a candidate, Correa, who dared to run without a political party because he said that he did not need one since the first thing he would do reaching power would be to call for a constituent assembly, à la Chavez. Well, it did not work quite well. After polls which for a while let folks expect that he might be elected on the first round, on election night the surprise was that he was second, and at 22% at that. Apparently Ecuadorians do not think that yet a new constitution will solve the problems. They certainly did not solve Venezuelan ones. To bring peace all parties need to sit down, talk and reach compromises.

What happened also is that the rather unpalatable banana magnate, Noboa, tied Correa tightly to Chavez while he was buying votes here and there. Correa foolishly thought that in Ecuador his stay at Chavez ranch in Barinas would pay off, and that lashing folks with his belt would show abilities to run a country. It did not. And recent polls suggest that he will not make it on the second round and that after two previous tries Noboa will get the seat he wants so much, and a possible coalition in Ecuador’s Congress which could bring some peace to this much troubled nation. Not that I am particularly optimistic with Noboa, but at this point in Ecuador, anything that promises a stable president for at least 2 years seems an improvement.

Thus, in spite of all the help that Chavez sent Ecuador, all the maneuvering around prickly Palacios, Chavez will risk to have wasted his money on Correa without even getting a few seats in Ecuador congress. And of course Noboa will quickly side with Colombia and Peru to refurbish the Andean Community, negotiate free trade agreements and push forward the Andean block while Mercosur keeps pondering the imponderable.

Add to this we see that Chile is debating a return to the Andean Community, and that Bolivia is in no rush to leave it, and we can only wonder where does that leave Chavez. Unfortunately for him he is not getting good news from Brazil.

The news of yesterday deserved reelection of Lula by 60% is no good news for Chavez (1). See, Lula is quite upset with Chavez for several reasons:
1) Chavez thinks he is the leader of Latin America when puny Venezuela is barely 13 % of Brazilian population, and even less of Brazil industrial might.
2) Chavez also wants to edge out Lula form some well known leftist forums located, imagine that, in some Brazilian city.
3) Chavez was spending an inordinate amount of time visiting Brazil, even gathering with the Sem Terra to criticize indirectly the lack of aggressiveness of Lula
4) And last but not least, Chavez prodded his protégé in Bolivia to nationalize considerable Brazilian interests in Bolivia. 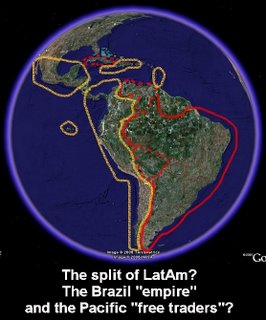 Lula who has been planning his reelection for a long time was not amused at all. Already a cold was detectable between the two, and the incessant trips of Chavez to Brazil ceased. Well, Chavez was campaigning for the UN, so maybe he had less time. But the problem was clear, Chavez actions were stirring trouble on the left of Lula as well as on his right. Lula had to stay put because, well, he needed all the votes he could get. Now that he did get a clear 60%, things will change. See, Lula has only four years of glory left and then he must retire. Since he is far from a majority in the Brazilian Congress and he lives in a country chockfull of ambitious presidential candidates with strong provincial fiefdoms, there is no way he can change the constitution to stay forever and ever.

So, what will Lula do on the foreign front? Lula is the president of a country with traditional imperial tendencies, just like the US has been. Soon the Venezuelan trouble maker will be told to shut up and let the big guys negotiate as they want. And that will be the end of Chavez internal ambitions, at least until Lula leaves office. Oh yes, as long as Chavez has a big check book and does not repress too much at home, Lula will embrace him and falter him in public. But behind closed doors Chavez will have to stay quiet.

Or does anyone think that Chile sudden rapprochement to the Andean Community is something more but the attempt at creating a trading balance against Brazil? Not Mercosur, Brazil. And wait for Mexico to try to fish in these troubled waters from which Venezuela and Brazil have been busy trying to shut out and leave it as a US agent.

Indeed, the time is right for a Pacific trade community of Latin American nations. Mexico, and Central America, Colombia, Peru, Ecuador and Chile are a natural trading block which has it all, oil, food, industry, free trade agreements with the US and cheap maritime transport between their main production centers.

Now, in Mexico, AMLO ‘s crusade against Calderon seems to be faltering as we can see form the dismal result in AMLO own home state of Tabasco where his PRD governor candidate lost by a wide margin a state that AMLO had largely won. That is, people are getting tired of a guy that barely got a third of the vote who is trying to wreck the Mexican institutions, as deficient as those ones are already. But it is not only AMLO suffering the consequences of his misplaced pride: the result could give a chance to the historical declining PRI to recover popular initiative and become the social democratic opposition to Calderon’s PAN. Well, that would be nice but I doubt that PRI old caciques are able to understand the historical chance AMLO self destructive folly is giving them.

Meanwhile Calderon will have 6 years to demonstrate that the promises of Fox are not empty and that a modern and trading Mexico can lower poverty while a divided left leaves him the field quite open for a while. Calderon should look the Andes, there are friends in need there, as much as he needs them.

What has Chavez achieved?

It cost him a fortune, but he lost all but Bolivia (and perhaps insignificant Nicaragua, the last test available for Chavez). If Chavez gets reelected, besides been reviled at the UN for needless posturing and naked ambition, he will have helped along the division of Latin America into two, a Hispanic speaking one, and a Brazilian speaking one with some states that have no choice but to associate with Brazil (though Uruguay has already started “talking trade” with the US). Between these two blocks, Chavez will be a non entity that messed its chance at leading the Andean block, and that will be instead the “tonto util” of Lula.

Added next day: The Washington Post has an editorial on Lula's reelection. I am quoting one paragraph (with my [comments])

Lula's achievements have come without the populist trappings, irresponsible fiscal policies or erosion of democracy seen in other Latin American countries -- most notably, neighboring Venezuela [my emphasis]. Brazil's often precarious finances are in better shape today than four years ago. International Monetary Fund loans have been paid off, inflation is a mere 4 percent and the country has $60 billion in foreign reserves [without the oil bonus of Venezuela!]. Poverty reduction has come about largely because of an innovative program under which the government provides poor families with a monthly cash subsidy if they meet certain requirements, such as sending their children to school and having them vaccinated [The only requirement of chavismo is that you wear a red shirt].