Chavez vs. Rosales: the Dukakis syndrome?

I lived in the Boston area during the Bush versus Dukakis campaign. At the time I was rather hopeful of a Dukakis victory. He had been a good governor. He did manage to win very difficult primaries. Bush senior had chosen Dan Quayle as his V.P. The weather that September was beautiful.

Then Dukakis decided to play governor even though he was running for the presidency. And he played lousily at it. In a daring move Bush flew to Boston, embarked on a ship and toured Boston Harbor to complain about how polluted it was, how lousy had Dukakis been dealing with Federal resources to start working on the pollution of the harbor. (1)

Next day I was having a heated discussion with some of my Liberal colleagues arguing that Dukakis should have flown/driven back from Western Massachusetts to wait on the pier for Bush ship and force a debate right then and there. But no, Dukakis stuck to his governor tour and dismissed Bush. My friends agreed. Dukakis never recovered. 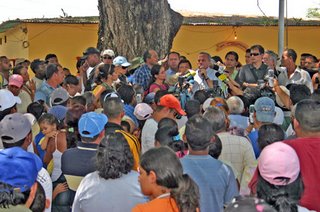 I was reminded of that today as Rosales in a daring move went to La Paragua, scene of military crime a few days ago (read a summary at Miguel's here and here; and read today’s report in English and also here and here, and also directly from the Rosales web site).

Apparently since the crimes were perpetrated by some soldiers (murkiness is still around) no one from the high spheres has shown up to try to bring solace or even help. Not the ministers in charge (Baduel and Farias-2-) nor the Ombudsman (he only shows up to defend chavistas) and even less the general prosecutor (still searching for Anderson's assassination clues) and no point even in imagining Chavez there, who should have been the first one to land and investigate. But the glorious bolibanana revolution cannot be distracted by assassinated poor miners at home when it is saving Hezbolla from the Devil.

Thus Rosales went and Globovision showed the footage of a Rosales, on foot, no body guards, interacting with the small crowd of perhaps 200

people, but a small crowd that includes most of the people of the given village, and mostly a very symbolic crowd on how the little people are eventually abandoned by Caracas, by the egotistical revolution, by all, even after they have been promised all sorts of things to stop mining.

This was an inspired move by Rosales and the fact that at 8 PM there is still no reply from chavismo shows how unexpected, and unsettling, was that move. Is chavismo suffering of the Dukakis syndrome? That the election is won in advance and that there is no need to reply to accusations? I hope so!

1) Not a great link but Internet was not as richly served these days.... I still remember vividly the Boston Globe picture of Bush in the Middle of the Harbour trashing Dukakis.

2) Jacqueline Farias has revealed herself to be quite an insensitive person over the years. She was the not too bad Public water system administrator (though not as good as the precedent one but since chavista public workers are so lousy, when one sorts of manages to hold the job soon enough people think of them wonders!). But in that job she admitted applying the Tascon list and since she has been promoted to the ministry of Natural resources she has been seen more often at political rallies than, say, examining the mining situation in Bolivar state.
Posted by Daniel at 1:33 AM