The first thing about the momentous events of today is to keep a sense of perspective: a 2 year stint in the UN Security Council is not a big deal. It does not even give much prestige: after all Venezuela has been in it 4 times already and it seems that this has not helped much today. 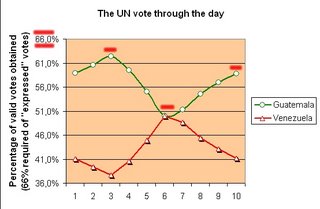 The reason why there is Security Council, S.C., is that every time there is a crisis you cannot have the near 200 members seat down immediately and debate. Many parliaments in the world know how cumbersome it is to get all their members to seat in a hurry. In the UN it is potentially so difficult (some ambassadors might be half a planet away) that wisely they came up with the S.C. as a mini parliament of sorts (for new comers: there was no internet in 1945, and often no telephone even, or a cranky one at best).

Wisely the 10 open seats (5 are permanent) are sort of distributed regionally. Thus Latin America gets two seats in general, one for the Caribbean and Central America and another one for South America. But this is not a strict rule as for example right now Peru and Argentina hold a seat.

Finally the countries chosen for the S.C. tend to be countries that show a capacity to cooperate, for some dialogue, to participate in the burdens of the UN such as sending troops for peace keeping or giving money for their support, at least according to their capacity.

A last but not least observation is that when everything is said and done, any country can seat there depending on how international power games play out. Thus democracy or Human Rights respects are no guarantee to get in ANY of the UN agencies as we see regularly major violators of Human Rights such as Cuba seat in important committees on Human Rights.

That is, countries will end up voting on their own circumstantial interests for whomever they feel like at any given time. For at least 150 countries in the world it is of absolute no concern whether Venezuela or Guatemala get this year open seat. Oh, they do have a preference but they are probably neither going to express it in public nor make any fuss if their preference loses.

Two years ago Guatemala decided to try a bid for a seat. After having managed to end a bloody civil war and effect a return to civility it seemed a good idea to mark the return to civilization of Guatemala. Soon enough most of Central America rallied and Guatemala initiated its protocol campaign which consists in making sure that as many countries as possible know about Guatemala, its good intentions and that it will be able to speak on the name of its regional area. That is Guatemala is supposed to “report” in a way to every country South of the Rio Grande, including the Caribbean. Thus if there is a conflict, say for the sake of the argument, between Brazil and Costa Rica, it could be Guatemala that could present it to the security council and help each country present its case when appropriate.

But Chavez decided about a year ago that he wanted that seat for no other reason but to attack the US (using Bush as an excuse). The amazing thing is that today he almost made it: at some point 93 countries voted for Venezuela knowing full well that since last Chavez visit to the UN, a Venezuelan presence in the Security Council would be a perturbing presence considering all the major issues at stake for the next two years. A president by the way who has expressed open support for terror groups or regimes (North Korea, Hezbolla, Syria, Iran). All the countries know that, and if they vote for Venezuela that reflects in large part how little real influence the UN has and how little it cares about regaining some of this prestige. Not only it voted anti US, but it failed to do so properly.

The little graph above shows how the vote moved through the day (according to Globovision reports). To be elected either country was required to get 66% of expressed votes. It is not idle to note that the other 4 seats were allotted ON THE FIRST ROUND VOTE. I have presented the result as percentage of the votes obtained.

What happened? First Guatemala had been campaigning for long enough whereas Chavez was a late comer who tied to buy his way in. For this he offered all sorts of projects to all sorts of countries and even opened more than a dozen of embassies in countries where Venezuela has no business whatsoever. But some small countries love to have a useless embassy as it creates clerical and janitorial jobs, plus it is an occasion for a few parties in the tropical boredom that envelops them.

Since Guatemala had secured enough votes it got its due and even climbed to a maximum of 116 votes, 62.4%. At this point, if Venezuela were a civilized country, it would have recognized that having served 4 times in the Council it would be a gracious thing to decline in favor of Guatemala saying that they will run for next year seat instead. Actually, if Chavez were truly civilized he would have done that after the first round.

But no, Chavez is a military and such subtleties are lost on his “you or me” world. And Venezuela stayed. The reason is that after a few rounds of voting countries bound to Guatemala are released of any vows they might have towards Guatemala. For example during the “campaign” Panama might have said Guatemala “OK, I´ll vote for you 4 times in a row but if problems persist then I will do as I think it is best”. Guatemala began to slide. This could also be due to some countries trying to offer an elegant way for Venezuela to exit by allowing it to improve its result. Thus we got the second climax when Guatemala and Venezuela tied at 50% each with 93 votes.

Venezuela (or rather Chavez, let’s not forget that it is not Venezuela’s foreign policy, but strictly a Chavez one) decided to keep on, bringing the situation to an embarrassing 10 round vote while slowly but Surely Guatemala regained its lost ground. It is difficult to observe how mishandled was the whole thing by the Venezuelan staff sent for the occasion. But I suppose that no one dared to tell the truth to Chavez as surely a few heads would roll after such a humiliation for the new world leader the Chavez fancies himself to be.

The only charitable explanation here is that Venezuela wants to at least be able to say that it forced Guatemala out and that since Guatemala was the voice of the US/Bush, it would be a great victory for Venezuela even as it lost. I suppose that naïve or ignorant souls could buy such an argument.

Meanwhile it looks now that neither Venezuela nor Guatemala will make it and Chavez will get at least that fig leaf, but at the cost of having permanently alienated Guatemala and many of its Central American supporters who cannot possibly see with a good eye the Venezuelan bully trample on something they had been working together for so long.

Because the fact is that it is a huge diplomatic defeat for Venezuela. The first vote, the 109-76 is the important one and it reflects the contempt of the majority of the world for the military lout that made it president: they got the measure of the man a few weeks ago with his devil speech, an unseen tantrum since the time of Khrushchev. The 76 countries who voted for Chavez are mostly made of a group of little to no democratic countries from Africa and the Middle East plus a few LAtAm that had to cast their vote for Venezuela for automatic solidarity such as Uruguay voting for Venezuela "because it is in Mercosur". Apparently experts tonight say that a significant amount of Islamic countries knew better than to support an Hezbolla/Iran supporter.

The “campaign” for the UN seat has cost Venezuela hundredS of millions (and I underline the plural in hundreds) and it will not bring any return (nor it would be bringing justifying returns if Chavez had got the seat). In a normal country there would be accounting for the financial and diplomatic damage that such reckless foreign policy causes. We might pass the bill on December 3. Meanwhile it will take years for Venezuela to recover some of the international stature it used to hold.

PS2: A few weeks ago one of my post showing homeless in Venezuela was controversial. But I observe today that Alek Boyd following the Rosales campaign can find even worse pictures than what I posted. And that in La Vega where a semi fascistic crowd tried to bloc a Rosales campaign event. Some democracy! And all of this happened yesterday while Chavez was being set straight at the UN. Maybe this picture will reach the hands of a few countries who are still supporting Chavez.
Posted by Daniel at 4:04 AM