How to fabricate an electoral poll in Venezuela 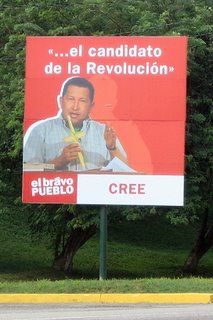 Would you buy a religious symbol from this man? (1)
This should probably the opening question about any polling group working in Venezuela these days. I am ready to bet that the reply would not be any more or less rationale than what we have been reading. In fact I am still amazed at why so many people get all strung out about poll results. They are meaningless, no matter whom they put ahead. Or at least this is my conclusion.

Let’s start by the beginning, the poll wars unleashed by Chavez. This one is unable to rally the troops in enthusiastic and colorful meetings as Rosales does, no matter how much money and buses chavismo disposes of. Thus he has decided that the best way to go is to pretend that everyone is voting for Chavez anyway so why do bother with campaigning and rallies and such stuff (which used to be THE staple of any Chavez campaign in the past, even when polls were giving him handsomer margins than what we see these days). The added advantage is when a fraud is committed on December 3, then it would be easier to have folks swallow the pill this time.

Unfortunately the polls showed by chavismo are easily detected as having major flaws. The Zogby poll was commissioned to a Mexican pollster who commissioned back to a Venezuelan company of which no one knows yet the name, social situation, etc, etc… Still, it might be OK to subcontract polling, but there should still be, as any decent scientist would say, control points. The control point of the Zogby poll failed MISERABLY: in a question as to whom folks voted in 2000, a question which should have been the perfect control point, folks answered 8% for Arias Cardenas, 30% off the actual result!!!! A pollster that is unable to check past political history to verify his polls cannot be trusted. That poll died right then and there, Zogby full of egg on its face and unlikely to ever find a Venezuelan client except fraudulent ones.

The other poll was the Evans/McDonough. This pollster has been already rather controversial in the past, favoring liberal causes I was told and read (nothing wrong with that, on a personal level, but a problem when accurate measurement is tampered with). This poll came already with a major

red flag: it was paid by PDVSA. Since so much was made of that poll I decided to look into it, to find the failed control point that I am sure would appear as it appeared in Zogby. I did not have to go far: it was already in the third slide, as per the web site of the pollster! From the first inspection the choices of questions as major problems for the country smacks of imported alien methodology transformed to suit some agenda. For example, the state of roads as major problem, worse than corruption, or the economy (stupid!) or personal security? What is more important, that you do not get routinely mugged when you take your bus or the potholes that make you bounce once and again?

But the big failing of the Evanc McC poll is that it reflected that unemployment was the main problem of Venezuela, going directly against the Government own INE results. How come? First any poll that has recently be done puts personal insecurity on top, some times incredibly far ahead of other issues. When you live in a state of fear for your wallet and even life, holding a job is certainly important but not central. But it does not even stop there, the presentation of that slide is suspicious when you go and look at the “second” most important problem. And when you look at the bottom left corner you read 30.11 Consultores. A group (which we suppose is the subcontractor in Venezuela) who no one has never heard off and who tries to confuse the reader with a clear and unfair allusion to Consultores 21, a decent local pollster who would not have done the shoddy job that Evans and CO, did. ‘nuf said.

So what is going on? Well, a rumor, unverified, is that Makarem or a Makaren like character is behind this stuff. If you remember the NAOR scandal, the favorite pollster of Chavez who turned out did not even had an office, it seems that the government has wizened up some. Now there is a front in Venezuela and probably PDVSA or someone else is paying Zogby and EvansCo. to make the poll as long as they subcontract that Consultores 30.11. It is really not that complicated and it is really the way the regime operates. We have seen it before, attacks included against this blogger and others.

Surprisingly, I have the yet to be confirmed perception that Rosales does not have a major pollster working for him. That is, as an old fashioned Venezuelan politician, he believes that the only way to gain votes is to hit the streets. Just as Chavez did in 1998, by the way. Poll or no poll, in Venezuela as long as they have not seen you from afar on a stage, or do not know of someone whose granma’s aunt was hugged by you, well, you do not exist.

Thus we have to rely on friendly pollster, friendly here meaning that they dislike Chavez and that they will be doing polls even if Rosales is not willing to pay for them. In the lot we have Keller who looks everyday better and better. After all he has come clean, in a worth reading interview, if you can read Spanish, deciding that he will not discuss or speculate on voting intentions. Instead he has divided the country in 4 groups and thus set the stage for the “voting potential”. If we do not know how this will play on December 3, at least we know what is the possible top for each one, and those tops are now too close for comfort for Chavez. Other serious pollsters are starting to confirm the result of Keller. And we have still three weeks of campaign and the speech of Ramirez has not played yet its full effect. We will see.

Meanwhile my advice is not too worry much about polls yet. Look at trends if you must, but look also at street rallies and marches. One thing is certain: Rosales drags way more people to the streets than Chavez and this is as good as any poll you can do in Venezuela right now.

1) Taken at the entrance of San Felipe a couple of days ago. Reads: “the brave people,…believes” and also plays with the caption “ the candidate of the revolution [believes]”. This outmost disgusting picture that I opened the post with is self explanatory as to the levels at which chavismo is willing to lower itself to get votes. I will comment about it, with other ads, sometime this week end. Chavez is a man without any religion but himself and holding a cross in his hand is, well, an insult to anyone’s intelligence.