The Venezuelan election of 2006: a final summary

Over the past two weeks I have been writing an analysis of the election results of December 3. I am not sure how accurate my views might be, but at least they do somewhat make sense, and, best of all, were a cathartic moment after the big disappointment of that day. There is only a general conclusion/summary left. This one comes after the table of links below, each link taking the reader to the corresponding article for more details.

The results scrutiny
Did chavismo win the jackpot?
The mysterious chavista voter
Chavez plans?
The opposition limited but real success
The new Venezuelan opposition
How to reach the opposition voter?
A road map for the opposition?


On December 12, with 98,29% of votes counted, Chavez was winning with 62,87% to 36,88% for Rosales. The result is clear. No matter how much cheating was done by the CNE, the army and assorted free agents, it cannot account for the margin. Even if an astounding 1 million were to be added thanks to the increasingly questioned electronic gizmos, that would still leave Chavez leading Rosales by 2 million votes. There is no escaping it, Chavez has convinced a majority of Venezuelans to trust him with the country for the next 6 years and do as he pleases with it. There are very few cases in history where a free people have been so willing to gamble their democracy on a single man. We surely will pay the price.

There is also no escaping that this has been the most polarized election in our history. There was no third candidate. An irresponsibly lax legislation allowed for the inscription of non credible candidates who have cost dearly to the nation in useless paperwork. At the end of the day they got a ridiculous amount of vote. The last one, Isbelia Leon, did not even get 800 votes. The third one, after Rosales, got less than 5000 to Rosales 4 million+. That the CNE allowed such silliness speaks volumes in which contempt democracy today is looked upon in Venezuela by the ones in charge.

But the CNE has more to account for than letting any jerk run for president. There were too many irregularities, too much favoritism toward the office holder candidacy, too many questions left by the Sunday 3 exercise. Trust is far from recovered in Venezuelan elections. It is not enough that tomorrow a poll gives 51% of favorable opinion to the electoral umpire: anything less than 98% is a dismal failure. In this respect Tibisay Lucena, as predicted, has shown herself to be just an agent of chavismo, put in charge of the CNE to try to let her boss scandalously be reelected but in as palatable a way as possible.

But the polarization hides in fact a political complexity that Chavez is trying really hard to smother. In Venezuela any political group can support any candidate it wishes. Scandalously again the CNE has allowed insignificant and distracting groups to support either Rosales or Chavez. The ballot had 86 stickers to pick from. Very few groups reached the 0.5% mark. The graph below tries to illustrate the approximate grouping that these multiple groups could look if a parliament had been elected and if only parties with more than 0.5% got seats. 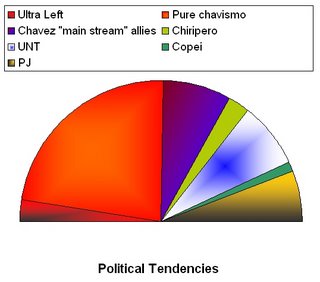 One thing that becomes obvious with this is that one third of Venezuelans have no representation in the National Assembly, and only can count on two state houses, a handful of town halls, and near zero influence in the judicial, public administration and institutions. The only institution which still escapes chavismo is the independent universities (which should not last much) and the press (which is already under siege).

Unfortunately for Chavez the bulk of the educated and professional class have not followed him; 8 years have made little dent in the middle class and qualified workers of Venezuela. Chavez wins everywhere were the poor live, where the country is at its worst, where the only improvement has been a second rate primary medicine facility held by Cubans and a few goodies spread around. Paradoxical perhaps, but that is the result, a result that also reflects more than ever on the crude legacy of social failure that Chavez feeds on. Wherever local governments manage to create reasonable existing conditions, where some services appear, where cultural activities are possible without you getting shot at, there the opposition wins. Can Chavez really hope to build the country fast if he decides to ignore that 36% which represent the most trained sectors of the country?

The opposition finds success in surviving, in showing that no matter what Chavez does, no matter what threats or abuses, it is still holding the heart and mind of more than one in three Venezuelan. But today they also realize that the road to recovery will be very long and that many sacrifices will have to be made. What is more troubling is that never before have two visions of a country been at such logger heads. The polarization is intense. We only know that a sizeable chunk of Chavez electorate could swing if it felt safer in voting, if it felt that it would do better outside of Chavez. The big challenge for the opposition is to create an alternative and to measure if this blurry support for Chavez is large enough to make the opposition grow enough to unseat Chavez someday.

If it is not too late.

Because the real issue as of today is how Chavez will read these results. He can either see them as a conservative vote, a not rock the boat vote, a vote for continuous misiones and progressive changes without changing the basics of Venezuelan culture and traditions. Or he could decide that it is a clear mandate to do as he pleases, to keep on his adventuresome track, and to speed up the march to a new social order that he hopes will be irreversible in Venezuela. In his ignorance and hubris, that no one will dare to question in his entourage, he will fail because no social order was ever irreversible, and even less eternal.

Tags: elecciones3D, rosales, chavez, venezuela
Posted by Daniel at 3:37 AM