How to deal with chavismo: pop some corn, sit down and watch

One of the nice things about being now in a quasi hopeless opposition is that you have more time for yourself. Instead of being tied in knots over the latest Chavez utterance, you can relax some and start watching the funny part of it. After all, like all regimes that control everything, the self destruction starts from within. If you cannot light the fuse you can at least watch who is doing it and see it all happen. These past days we have seen enough to have a great time. Three in no particular order of importance.

Well, you know that when even Hillary Clinton is on Chavez case, his US propaganda machine, the infamous VIO, is not working properly. Well, we have known that all along, flattery and constant praise only end up ruining the sycophants that should have known better (à la Weisbrot). I am waiting for the other shoe to drop with Obama and then we will see who the VIO will support for the US campaign. The sad truth for Chavez is that all he sent on US propaganda and US attacks have only served to unite more and more Democrats against him. Remember the very strong statement of Kerry against Chavez? See, if there is one thing I learned in my US years is that the US like to wash their dirty laundry among themselves and really do not like other people bringing in their own skid marked underwear. OR, in other more diplomatic words: the Dems get much better intelligence on Chavez than this one gets on the US.

Uribe to Chavez: thanks!

And while we are discussing foreign intervention. Chavez is fond of accusing that the whole world is after him, mixing nicely his paranoia with his very own sociopath tendencies. As recently as this weekend Rangel now out of office felt compelled to state again that "all were ganging up against Chavez". Rangel knows how to flatter his ex boss to get him to come as the first interview in the TV talk show that Rangel is renewing from his journalistic past. In the Sunday premiere show Chavez went again about all these nasty people, CIA mostly, infiltrating everything in Venezuela and trying to kill him for the nth time.

Well, a very nice tale for those who love Chavez but the fact of the matter is that only too often Chavez gets into trouble because HE IS the one meddling in other people's business. If we all know that Bolivia is now a protectorate of Cubazuela, that does not mean that Chavez is sitting still elsewhere. And he got caught in Colombia this week end.

See, the newly appointed ambassador, Pavel Rondon, has been making the rounds of leftist Polo Democratico 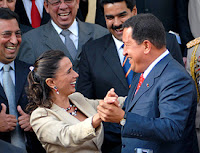 meetings around Colombia, with little diplomatic self restraint when it is time to attack Uribe. All very amusing, and probably very, very counterproductive. Uribe is mired into some nasty scandal about some of his supporters cavorting with the paramilitary. Even his foreign minister Araujo had to resign in a rush, even though she used to dance Vallenato with Chavez for the cameras. Now, thanks to this video a new scandal arrives bringing back again the attention on the FARC. Uribe did not miss a beat. His new foreign minister, also named Araujo, and a newly FARC escaped hostage (6 years!) at that, did not mince his words on the ambassador actions. As Alo Ciudadano said "ese si que no baila Vallenato" (this one for sure does not dance Vallenato)

I was greatly amused this week by the reactions to the last political bureau reunion of PODEMOS. They decided, it seems, that they will take the risk not to join the PUSV, that structure Chavez is creating, a proposed monolithic party that will hoard all public jobs in Venezuela. Minor coalition partners have been given the choice to either join or to forget about sharing in the loot. Even the Communist Party of Venezuela has been told to line up!

So, not unexpectedly, PODEMOS and the PCV and even PPT, who did help to nicely pad up Chavez majority, are not very pleased and are in that Hamletian paradigm where they know that if they do not follow Chavez, well he will dispose of them as he has disposed of any uncomfortable ally in the past. Trust me, it is rather nasty in general. Some, totally gutted of any self respect and inner will have come back crawling like Arias Cardenas. Sad, very sad...

But very amusing. See, PODEMOS who has had no problem balking out the MAS in 2002 to retain its share of riches from Chavez coffers, which has proposed some of the most infamous legislation to strengthen Chavez power is now finding itself in the hot seat. They should have known better, they should have watched around. But human nature immense hubris made them fall into the trap.

It is also very amusing as I watch the very incompetent opposition delight in the apparent PODEMOS break up. Well, the silly Venezuelan desperate side of the opposition is willing to follow yet another white knight out of nowhere. Except that the offered White Knight has an impressive track record of incompetence, treachery, low life quality that makes it rather unqualified to create the new opposition to Chavez. I mean, can anyone seriously think of bloggers like me ever voting for the slime bucket of Ismael Garcia? Pleaaase....

So, to all of these anti chavistas out there, just sit down and watch, the show is getting very interesting, be it the poor Globo journalist agressed by an exasperated Chavez who seems to be missing a few moves lately to the meat shortage at the grocery store (well, I am semi vegetarian so I can laugh at it). All great fun, while we figure out a way out of this increasingly nightmarish situation.