How to deal with chavismo: watch them destroy their own constitution

In one of those unexpected twists, full of irony, today we are watching in total bemusement how the National Assembly has started the proceedings to purge the Constitutional Hall of the High Court of Venezuela, TSJ (brief blurb in English here).

Now, to fix the importance of the moment, the Constitutional Hall of the TSJ is now the only possible counter power to Chavez. It is the only constitutional power that could somehow stop what is going on in Venezuela. If it wanted so, which we have absolutely no reason to think it would. After all, constant readers of this blog and followers of Venezuelan politics know very well that in 2004 the TSJ was unconstitutionally purged and packed to a total of 32 judges (up from 20) all for all practical purposes appointed by Chavez machinery (1). There is absolutely no reason to think today that there is suddenly a majority against any branch of the revolutionary government, and even less the beloved leader. This is the story, as far as I can piece things up.

A few days ago the TSJ emitted a ruling which altered considerable the tax system of Venezuela. In brief, income tax could be only levied on direct salaries (some explanation here, courtesy of Miguel). Bonus, extra work, prize or gifts from your boss could not be taxed anymore. The consequences of it of course would be very damaging to the national treasury as some folks get sometimes more than half of their income outside of their real paycheck (sales people, for example). The implications would also be that eventually this could be expanded to people who only get paid per work done, it could induce employers to lower employees paychecks and give higher "extraordinary" bonuses, thus at the same time lowering the contributions to social security from the employer but also decreasing income taxes paid by employees. The SENIAT, Venezuelan tax collection office, asked for a clarification and the TSJ obliged on March 9, thus confirming at least part of their original ruling (the clarification can be read here). No accident there, no clerical typo.

It is of course not the objective here to discuss here as to wherever such a Constitutional Hall ruling is legal or even constitutional, but it is a ruling and normally can only be changed by changing the constitution or emitting new laws that would limit the amount and type of income that could as of this year escape taxation.

The concealed meaning was that since the TSJ magistrates get many "bonuses" then they decided to change the constitution and thus pay less taxes. Maybe, but I have my doubts as to them be so blatant though in the bolivarian pseudo revolution all is possible. After all if your boss does exactly as he pleases, why should you not as long as you do not affect directly the glory of EL Supremo? Isn't Chavez leading by example? No?

It is too early to decide what is going on. This is a highly unexpected development. The only thing that I can assure the reader is that in spite the pious words expressed by hypocrites like Cilia Flores, the N.A. chair, this is not a normal conflict between independent powers. When you have independent powers you have a series of exchanges through legal and normal ways before you take a decision to investigate and even to announce that your objective is to remove 7 Justices! I mean, you start by requiring explanations before you threaten them, no?

Only speculation is allowed at this point. Of course the ruling has some problems and it seems that the TSJ went too far. But not so far that it could not backtrack if properly addressed by the National Assembly who could simply ask what type of law the TSJ would require to remedy this tax shortfall. So, what is going on?

Problems in the constitutional secret debates? Does the AN knows that the court will not approve some of the times currently discussed in secret by the AN? It is not idle to remind folks that the chair of the Constitutional Hall is also seating in that if not secret, definitely secretive commission.

Does Chavez suspect that the TSJ, that he all but named himself, might still harbor an occasional judge that might happen to think that there is a law and all must follow it?

Is this an excuse to include a complete revamping of the judicial system in the constitutional changes projected?

Was there really some kind of mafia like attitude in the TSJ? But only there? Why should they pay for the generalized corruption of the regime that the TSJ is all but covering up?

Is there a conflict within the TSJ as one side tries to get rid of the other? There was after all a surprising change of leadership within the TSJ one month ago and the "ousted" (disgraced?) judges might want to tarnish the ones that succeeded them at the helm of the TSJ? The 32 judges elect every year their own president and of course that person has to be approved by Chavez.

Whatever it is I must reassure the chavista leader that might have followed me so far: there is no independent powers struggle here. It is a fight between different group of thugs put in charge of diverse dependencies by Chavez. Nothing will happen that could ever so slightly challenge Chavez power. Worry not.

Meanwhile chavismo is hard at work tearing to shreds the constitution that they themselves wrote in 1999.

VERY IMPORTANT NOTE: it is 9 PM and no governmental media has reported on today's event we started early this afternoon. Private and independent media have even done talk show on it but thus far ABN has nothing (photo of the page at 8:59 PM) , nor Aporrea, and not even VTV, the media of "all Venezuelans" who still manages to already report on Chavez "Alo Presidente" of today. Not only it is a sign of the confusion existing within government, but it also is a clear wake up call to the need of retaining private and independent media in Venezuela. We already see the extensive self censorship of state media, web or TV, there is no room for doubt. (click images to enlarge, all taken between 8:59 and 9:03 PM Caracas time) 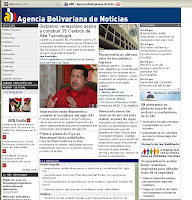 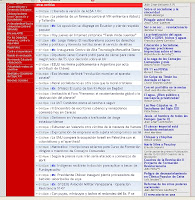 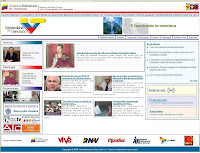 PS: we had to wait until Friday 7:22 AM to see the ABN report finally on such a grave matter. Based on what is written it looks like the TSJ is about to suffer a major revamping. Translation: Chavez needs even more subservient judges. there will be even more submission of powers to him, as if there were any power left outside of Miraflores palace....
--- --- --- --- --- --- --- --- ---

1) Search this blog (top left corner, with "tsj 32" and you will get two key articles on that matter on how the High Court of Venezuela was made gutless.