Perhaps the only true policy announcement of any meaningful content since December 3 has been the expressed desire of Chavez to form a single unified party to support his political action. Until then, the MVR of Chavez, a mere vehicle the best of times, was surrounded by lots of tinier parties which might not have many votes but which have considerable electoral experience.

But time has passed, the MVR has learned to buy votes, round up folks at election time, cheat electorally wherever needed, etc, etc... Thus, the guys that were doing the dirty work have long become unnecessary for Chavez who now relies on his own to win elections. There is one thing we can all agree with Chavez: when he says that the votes he got are his and not from PODEMOS or the PPT or even the PCV, he is largely right. For better or for worse there is a large section of the country that votes for Chavez no matter what. And many among these small allies know that and are not willing to take chances. [Warning! long post on provincial interests follows]

However not all the votes were securely under Chavez control. After all, as pollster have grown used to call them, there is a substantial number of transactional voters. These voters will vote for Chavez easily, but up to a point. That is, they require that Chavez delivers cash to their hands. They do not care much if Venezuelan roads are a mess, if crime brings their life in such danger that a trip to the grocery store can be an adventure, of if they have to wait for weeks and months for some type of surgeries in hospitals where you must bring even your bed sheets. They see that they are getting cash payments, or a lousy bureaucratic job, or something and they do not care about anything else. Democracy is a rather empty shell for most Venezuelans it seems.

The purpose of this post is not to discuss the implication of this alienation from the bulk of the Venezuelan masses, but to look on this as one of the explanations of what is going on recently among the junior partners of chavismo, namely PPT, PODEMOS and the old communist party PCV. These parties under the thumb of Chavez had become nothing more but some sort of employment agency, in particular the PPT who for a while had more than a third of the ministries in the cabinet of Chavez. Now they are down to three (PODEMOS to 0 and the PCV to only 1, though up from 0). However, within these parties hides some of that Transactional voter who like Chavez up to a point but prefers to vote for him indirectly. Chavez needs to control fully his electoral base, to make sure the purely interested voter does nto stray too far. There is one of the reasons of the single party objective, and why PODEMOS et al. must go.

Now, when the crisis starts and Chavez decides that he wants a single party, requesting that even the PCV dissolves into the new PSUV (PUSV? PUS?), even these hand out searching organizations start having problems. Oh yes, the minority ones who could not even manage to get 1% in December were joining enthusiastically the ranks of the new PUSV, such as Lina Ron. But the case of PODEMOS, PPT and PCV are different. PODEMOS has 4 state houses and plenty of town halls. It also has what is considered the best chavista governor in Didalco Bolivar of Aragua. The PPT has less elected presence but it is strong in trade unions and bureaucracy. And the PCV is a religion; religions do not die that easily.

And that is the crux of the matter: these political movements, inasmuch as they are subject to chavismo, PRE-date Chavez, feel that Chavez at least owes them his initial 1998 election, and have politicians that have been able to make a career on their own. The other day I was narrating the case of Didalco Bolivar as the most notorious one, but I could have added the case of Ramon Martinez, the sleaze ball of Sucre state, and many small local officials. Not much, granted, but people who love to be called leaders of this or that and to show that they are allies rather than subjects of Chavez as is the case in the pathetic MVR structure which is looked down on even by Chavez.

Now some of these people understand one thing clearly: joining the PUSV will mean that they will lose any shred of dignity they might have left, of self value, of self esteem. Granted, after 8 years of chavismo and supporting so many abuses, they have little to brag about in autonomy or personality, but they do have some at least at the local level where they operate. They know that the logic behind Chavez single party is that no one will rise to the top unless Chavez approves. And they also know that whoever rises to the top will will reach a very relative position anyway. There is only one leader and that one is Chavez. Period. For those who do not understand that I suggest them to review the story of the Soviet Union, of Cuba, of China, etc...

There is even something else, some of these folks have still some embers of democracy left in them, in particular Didalco Bolivar who has enjoyed winning elections on his own in due form. These people do understand one thing clearly: if the PSUV comes to form as a monolithic structure supporting Chavez, it will become the biggest threat to democracy. Simply put, whomever is not in agreement with the PSUV and Chavez will have to be crushed or treated as inexistent. The PSUV will be a lineal structure where no dissent will ever be accepted and it will become a very effective tool for the repression of whatever opposition dares to challenge the regime. PSUV monstrosities are excellent at forming storm troopers, at spying on society n general, are filtering job seekers, and what not.

In front of that crude reality, eventually some did not have the stomach to stay in. Didalco Bolivar is thus out and might suddenly become one of the main opposition figure, perhaps the only chavista left that could actually reach across the divide to some of the present opposition sectors. He had been long rumored that he could be a figure in a "chavismo without Chavez" situation.

But others do not have the strength of Didalco, and even less the self respect and self esteem to be the successful governor of a major Venezuelan state. So we see the Maracaibo mayor, Di Martino, abandon as fast as possible PODEMOS to join the MVR. Well, he wants to become governor of Zulia in two years and he knows that without Chavez he has not a chance on hell among a very crowded field of pretenders (Cabezas, Queipo, Ortega, ...). But no case is as pathetic as the one of the Yaracuy governor, Carlos Gimenez. 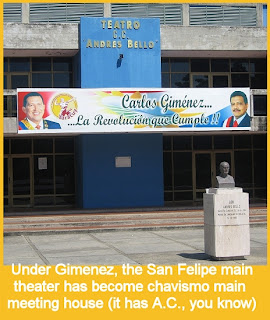 Before 2004 Yaracuy was reputed as being one of the best managed states under Lapi. Lapi in fact had become one of the main leaders opposing Chavez, having sat at the OAS presided negotiation table in 2003 for example. In 2004 he lost narrowly to Gimenez in an election of dubious quality. But Chavez had expressed his desire to eliminate Lapi at all cost. Since then they have found a way to arrest Lapi in some trumped up charges and it is now about a year he is in jail with NO TRIAL in sight.

That would be bad enough, but it is only the beginning of the Yaracuy woes. Yaracuy has a long tradition of agrarian problems and Lapi had managed to keep things under control. Gimenez unleashed the demons and as an immediate consequence many sugar cane fields were invaded, burnt down but not really resettled by new peasants. The Yaracuy country side is now a rather pitiful sight where large tracks are abandoned, fought over, and what not while sugar is now a regularly missing item on store shelves. The situation was bad enough that it required the intervention of the Spanish government who had some of its nationals settled in the country side of Yaracuy. Assassination and violence have followed these disputes and the new administration has been more than lax in their pursuit.

Yaracuy itself has gone downhill spectacularly. Gimenez has been unable to do anything else besides renaming social programs that Lapi had already set. Now they are bolivarian, are receiving more money than when Lapi was governor, but there does not seem to be more of that money reaching the masses. Extensive pot holes are back in the streets and highways. Public service is down except the one related to some Misiones, for the misiones people only, obviously. Abuse is flagrant, such as with the San Felipe main theater. This one has been permanently disfigured by a banner of Gimenez and Chavez, even though it is a public cultural arena. But chavismo has hijacked it for all of its indoor events, the tax payer paying for the air conditioning and upkeep.

In fact the degradation is so bad that even the local MVR folks have been asking for a recall election against Gimenez. When Chavez did a brief stop over a few days before the election, there people in the crowd welcoming him that were carrying banners asking Chavez to remove Gimenez! Banners which were quickly seized by police but still made it to the nightly news. Chavistas, MVR flavor, are the first ones circulating rumors from corruption to drug addiction, with many of these rumors ringing a little bit too true for comfort, in particular considering that they come from within the beast.

So it is no surprise to see Gimenez be one of the first ones to bolt out of PODEMOS. Quite pertinent for the sleaze he is. That way chavistas will not dare to ask for a Recall Election on him since the result becomes quite unpredictable in the confusion. Not to mention that now it might be equally embarrassing for Chavez to support or trash Gimenez.

And thus we come to the cartoon of Weil on top, as the evolution of the Venezuelan politician, becoming an "arrastrado", that is, a crawler. Very pejorative in Venezuela. There were three type of people in PODEMOS, the ones that had some self value like Didalco Bolivar; the ones that were foolish enough to think they had a value of their own like Ismael Garcia; and the ones who knew they were slime bucket form the start and that they have no career outside of Chavez like Gimenez. The problem with Venezuela is that the immense majority of politicians are in the two latest categories, no matter what political party we are talking about, except that chavismo seems to have a particular ability at attracting the worse of the lot among delusional and acknowledged thugs.
Posted by Daniel at 4:02 AM