Before the reader gets exited about the title and the prospective post let me start by the conclusion: there is food in Venezuela, we are far from being starved (I hope, anyway!). What is lacking is choice and variety; and on some cases there are actual shortages of some very basic staples. Short explanation as to the reasons at the end of the post. Click on images to enlarge.

This morning EL Nacional had in its front pages the following title: "Meats, eggs, sugar and milk scarce". So, never one to miss a shot at easy on the ground reporting, I took my digital camera and hit my local Central Madeirense around lunch time. I took the following picture with the adequate captions and comments. You will be able to see how this "scarcity" is lived through in San Felipe. Before you start, Central Madeirense is in San Felipe the "upscale" grocery store, that is the store where people that do not count their pennies go and thus where you find expensive items not found elsewhere in town. The lack of product you observe is thus not due to management not replenishing shelves because the products are "too expensive" and people are not buying. 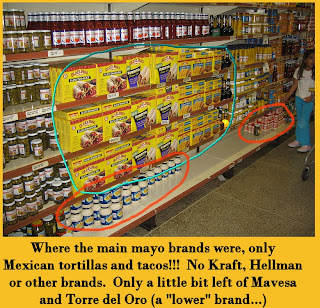 As you will observe in this first slide, the basic problem is that brand choice has been becoming more and more difficult in Venezuela. Mayonnaise in Venezuelan diet is a basic staple, abundantly used to spread on bread, dress up fish or salads and what not. The two leading brands are Kraft and Mavesa plus an assortment of other brands in general cheaper, of a grayer color and lesser taste. Most of them are missing except for a little bit of Mavesa on one of the "popular" sub-brands, not even in large amounts! And there of course is the perfect illustration on how Central Madeirense tries to hide its "shortages" least customers are tempted to try their lick elsewhere. The gaping hole is filled up by what customers do not buy much: Mexican tortillas... 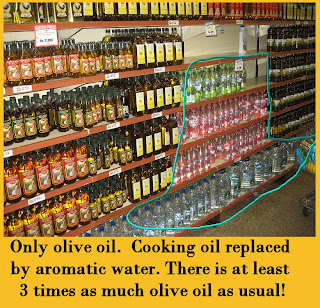 After the mayonnaise rack it is suitable to move on to the oil rack. There is no cooking oil available. None. No peanut oil or corn oil or sunflower oil or canola. The gaping hole was filled up by olive oil (too expensive for the average Venezuela, the amount of oil in the picture is probably the usual stock held back in the storage rooms of the store). but since olive oil was not enough, well, some flavored water was also added. I suppose it is a heath warning that Venezuela should shift from fired foods to boiled ones? By the way, I have NEVER seen so much olive oil in a Venezuelan grocery store!!! 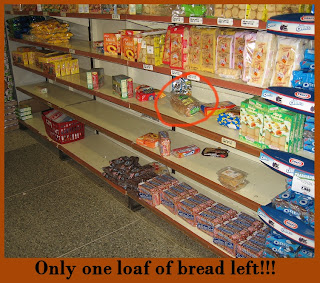 This next slide is very simple: the bread racks. It is rather empty and even more so considering that some of the holes are filled up by crackers that are not stored there usually. Not only the store brand is missing but even the fancier whole grain varieties of bread are also missing. 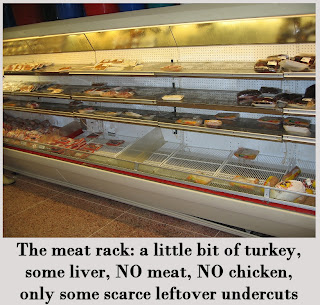 The meat section was pathetic. On the large meat stand where cuts are made to order, there were only turkey and some low cuts of red meat and pork. Not appetizing at all. The turkey was in good shape although it was only composed of drumsticks and wings offerings, not breast meat. No picture because the plexyglass front reflected the flash. However the pre-packed aisle is shown on the picture above. No meat choice. Thus we can say that unless you love meat stews, there was no open air grill this week end in San Felipe. 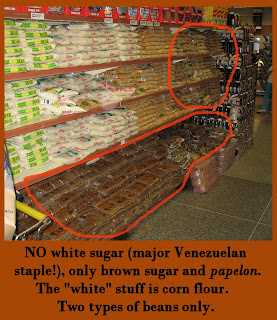 White sugar has been missing for months now. At least the supply of brown sugar has regularized some and usually you can get it. Beans have not been missing as much lately but today there were only two types of beans and not much of them anyway. 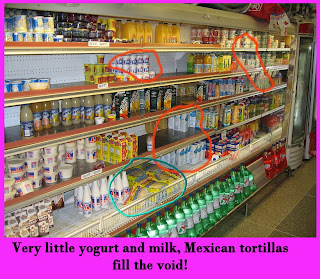 And we come to the milk problem. In the fresh produce section you can observe by yourself how little milk is left. No whole milk at all, only some 1 % milk Mi Vaca, and not for long (luckily for me this is my favorite brand so I was in luck, but quite often on week ends I have to come back home with the other brands that have a weird taste). Yogurt is also becoming very scarce although "suero" a by product of cheese making popular in Venezuela is not as affected. 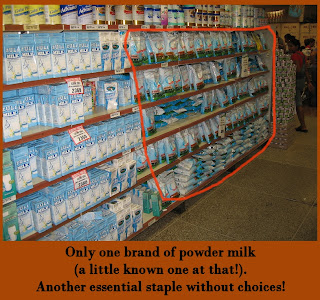 And when you go tot he powder milk section, well, you only get one brand, and an unknown one at that. All powder milk is now imported in Venezuela as we do not produce enough for our cheese and fresh milk needs. In fact, some of the cheese we eat is made from powder milk!!! Even the UHT long duration milk is becoming scarce. In the picture you can see only one brand on the left, Zulimilk, and a few boxes from other brands which are not the best ones.

The reasons are very complex but of a very simple origin: the price control policies and the currency exchange regulation. These have been greatly aggravated by an increased purchasing power from the lower classes. Note that of course I am delighted to know that through diverse grants and public pseudo jobs many have access to enough food, but the problem is that not only production has not followed but in many areas it has dropped as consumption increased!!!! Such as the milk and meat sectors for example.

The case of meat and milk is particularly clear: price controls and land invasions without adequate compensation while the new "owners" lack the skills and resources to take over the seized land has created a diminution of the number of cow heads in Venezuela. Thus less meat and milk as nobody wants to invest in farms whose security is threatened, from where you can be abducted for ransom, to produce things over which you might not be able to make any money, when you are lucky enough to actually not lose your shirt. Is there a mystery why producers are not investing, not expanding their flocks, letting it dwindle slowly?

The currency exchange control shows in the lack of other items such as Mayonnaise or cooking oil. Some of the additives cannot be imported because CADIVI, the control agency is not emitting on time foreign exchange requests. Delays in importing additives and supplies and grains are so long that this scarcity is an artificial creation for the governmental incapacity. Or is it? Well, the foreign reserves are dropping precipitously these past months. As Chavez is embarking on a totally unnecessary shopping spree of private concerns that are working very well, thank you, for political reasons Chavez must pay his bills first and too bad if the hoi polloi is out of cooking oil. Because of course, the increased resources of the lower sectors are not enough for them to buy olive oil, which they do not know how to use or are not used to anyway since olive oil is not for frying "empanadas". Otherwise there would not be olive oil either.

Sugar scarcity is a pure product of the land seizure policies: many of those, such in Yaracuy, were taken out of sugar cane production to produce who knows what. With ethanol production increase, well, you know, sugar is so expensive that even Mercal subsidies balk at buying it. Because see, white sugar is also under price control whereas brown sugar is not. So why refine the little bit of sugar produce here when you get a better profit by selling it semi raw?

I could go on, after all I do work in the agribusiness sector. Or I could go and look for numbers, and statistics and what not. But see, the pictures of this Saturday morning shopping are there. If you can figure out better reasons for the scarcity, please, do share them in the comment section.

However there is one sobering thought: when you go to a grocery store and there is no more choice, then the supply of your food items becomes very endangered. What if the only brand around has a problem? What about if there workers go on strike? Or their provider are tired to wait for CADIVI dollars? Today there is only one brand of powder milk. Will it still be there next week? And will Central Madeirense have enough stuff to keep filling up the gaping holes?

Until when for rationing cards and empty food shelves?