The student revolution will be televised (or was that YouTubized?) 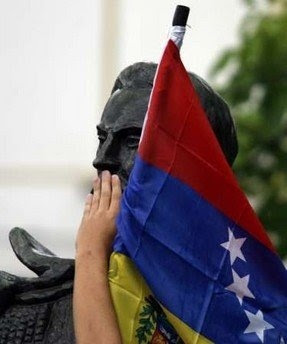 There is one thing that Chavez did not preview in his bid for power, and that is modern technology. Ever since he tried to consolidate his power through diverse forms of repression, his attempts have been dutifully document by some passer by holding things as simple as a cell phone with camera capacity to sophisticated filming equipment. This year is even worse as now the cell phones with video are affordable to students (well, enough of them anyway to document their revolution). Add to this YouTube and now you do get a truly televised revolution, not that infamous movie now totally discredited as chavista propaganda set up (see links on the right if you still do not know about that). 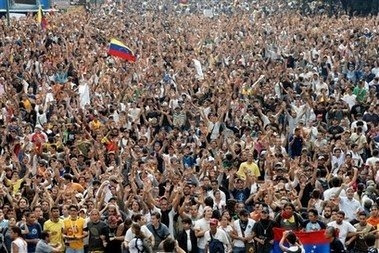 Not only that but they are creative as this above Censored Bolivar image shows us. They show themselves in their marches such as here, a march that Chavez scornfully dismissed as a few rich kids. Well, it is nice to know that there are so many rich kids. Venezuela must be doing really good, so how come they are stomping the asphalt?

Alexandra pointed me to a site where one of these students (we think) has been compiling some of these pictures, coming from El Pais as the ones I already posted to moved frames taken from his friends. I have taken some for this mini photo essay. You can visit him for more if you want, but he is not the only source. YouTube has plenty of videos coming up (and no time to review them so I will let the curious reader sift through it, use Venezuela as a key word, and vied by date added such as here, a good starting point). You can find many little gems, starting with a recent video which shows in Maracay how the chavista storm troopers attacked the student position. In Maracay where supposedly chavismo is sole lord of the kingdom! And of course the chavistas S.A. have stones and sticks at hand, and some red on them. But here you have it, the chavista lies crash fast on the You Tube wall (even though they also try to put their counter propaganda videos, which are quite lame if I may say).

And as usual the classic images of romantic student rebellion against police brutality appear as in this little montage of mine. There are things that even the steam roller of boredom and conformity of the chavista pseudo revolution cannot change as it finds itself falling into the repressive trap. In the image wars, students always win, whichever revolution we talk about. A brave but doomed revolution this one might be, but the positive memories and the future are with these students all over Venezuela, while Chavez for the rest of his life will be now tainted irremediably as the repressor, the goon, the anti freedom guy.