Enjoying the moment: chavismo on the defensive

If there is something that makes these tense days particularly enjoyable is to see the decomposed chavistas faces, unable to deal with a situation that they had never thought of: no violence, students ruining the revolution credits, as it was. All of their paradigms of aggression and unfair advantage are useless as for the time they must improvise, something that few of them are able to do. Today the students wanted to march from the UCAB to the National Assembly to bring some "documento", a piece of paper full of grievances, the traditional Venezuela exercise. Instead of letting them pass, well, Libertador Mayor Bernal refused any permit. Students decided to go but on the walk sides. Chavismo would have none of it and blocked the UCAB students inside the campus. The long drawn out moment only resulted in the start of some fraternization between the Metropolitan Police and the students. A classic.

Chavez and his lackeys behaving more and more like your average right wing repressive government are getting the same results. How hollow the international conspiracy, presidential assassination, destabilization talk sound!!! And how twisted the faces of those uttering them.

But it did not work at the end. The USB march did manage to join the UCAB who sneaked to the Vatican Representation where, of all people, Ismael Garcia of PODEMOS went to meet the students and receive the "documento" that none of his colleagues who be seen dead holding it. It is not enough to exculpate all of the grievous faults of Garcia, no. But it shows truly that the students are making public some of the fissures that we suspected within chavismo when the PUS creation did not take place as wished for.

So, what other novel strategy for chavismo? They decided to call of a mammoth march Saturday. From the info I got, the hurried organization might flounder: I have heard from some public employees who have not been summoned tot he march! That is, there will be no roll call, no sandwiches, no water bottles, no booze for all the marchers, assuming they show up. On the rush the government can think of nothing else to counter a spontaneous student movement with the crassest of chavista political maneuvers: crowds. We'll see. What I am sure is that tomorrow there will be lots of buses driving up to Caracas, full of red shirted folks, while today the scarce buses carrying a few multicolored students were stopped by the Nazional Guard.

At any rate, even though today was planned to be low key by the students, it was still quite active all around the country. Who knows what they will do tomorrow. Perhaps counter the Caracas march with a big Valencia rally? Or perhaps rest nicely, organize themselves, let the government waste its breath on a now pathetically old fashioned event and come back Monday in full strength. The opposition, by the way, is not faring better. Rosales could only offer a RCTV referendum and other folks are calling for a counter march on Sunday which could fizzle as much as the chavista one on Saturday. Both sides it seem have lost the agenda! I love it!

Meanwhile back the ranch Chavez is not having a good time. Now he got into a spat with Lula himself as Chavez big mouth could not help itself but to insult Brazil's Senate for worrying about freedom of expression in Venezuela and thus force the last major Democratic leader of Latin America to growl against him. I mean, could have Chavez just shut up? No, in a stupid and silly bravado he went ahead to let the senate know that Portugal was more likely to colonize again Brazil before he would relent on RCTV. I mean, this is so incredibly lame, and ignorant, that I 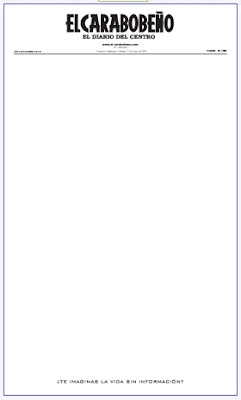 will not offend the reader with further discussion.

And there are more, from Amnesty international to the Spanish government but the reader gets the drift, the list gets longer and longer and chavismo replies as a cornered chihuahua. After all, they all love nothing more but to be received everywhere in red carpets, and it is going to be very difficult now, no matter how fat the wallet is. Heck, even Jesse Chacon just lost his US visa. Jesse Chacon liked to travel to the US? Imagine that!

But two other great hits came from the press. First form El Carabobeño. This venerable paper, and one of the only two that I buy when I cannot find El Universal or El Nacional decided to run an empty front and back page, with only a small question at the end: How would a day without information look like? I am pretty sure that this is exactly the picture of an opposition newspaper that Chavez would like to see. But I am pretty sure that in the Valencia area the impact must have been quite considerable. People must be told what Chavez is all up to with his repression of freedom of information.

To end this nothing better than the fabulous Economist cartoon. No explanations needed, as Chavez is toast for the international community that matters. Ridicule does not kill in real life but it can kill in politics. 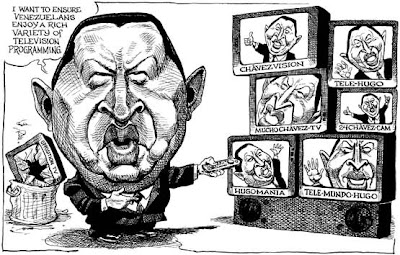 PS: Do not forget to visit YouTube for all sorts of videos on the different marches around the country, AND the RCTV newscast which now goes out on YouTube. view by "date added" to simplify your task. Also if you could subscribe to You Tube "el Observador en linea" you will get to show your support to RCTV, promote YouTube as an instrument fore democracy and be counted on the Internet. By the way, RCTV is already higher in ratings than Radioaporrea which is quite nice.