French Legislative elections: snatching defeat from the jaws of victory

These French Electoral season has been a box full of surprises. One year ago, strong from the victory at the regional elections and the European Referendum rejection all bets were for a presidential victory for a socialist candidate. In a year Nicolas Sarkozy turned all tables and got a month ago a solid, very solid victory by French standards against the hapless socialist candidate Segolene Royal. Over the weeks that followed all polls were giving a crushing victory to the UMP right. The first round ballot results of last Sunday seemed to confirm that tendency when in a very unusual result 20% of seats were won outright, when the norm is closer to 10%.

And tonight the ones with smiles glued on their faces are the socialists even if the next parliament will be controlled by the UMP. What happened? How come the victors look like they were defeated? 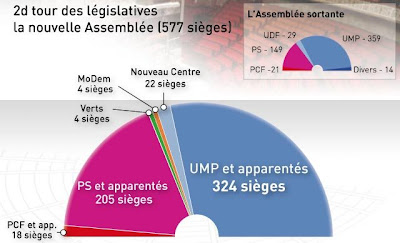 As usual hubris and excessive self confidence can explain why the UMP failed to gain the 400+ seats that were expected. And thus, even as they win the election, it is a maimed victory that will jeopardize the Sarkozy agenda for the next five years. Make no mistake, the UMP will rule, but the opposition will be strong enough that whatever Sarkozy does not bag in parliament by the and of the year will never happen. With a 400+ victory Sarkozy would have gotten a full year honeymoon. Now he will have to settle for a quarter and maybe some more with luck and strong political skills.

The reason is quite simple. When the new Fillon cabinet was named a month ago it started by a program of tax incentives that, no matter how the UMP tried to hide it, favored folks who already had some money. The idea was of course to try to promote more investment in France and boost the economy growth. It did work in some countries and it certainly was worth trying in France which seemed blocked for years.

The problem is that such a loss of income must be compensated from somewhere, even more so in a welfare state of the size of France. The right had no better idea than to leak a possible increase in sales tax, and clumsily labeling it "social sales tax". And it did that this week, in between the two round vote. I suppose that Fillon and Sarkozy truly thought that they had a lock on 400 seats and they decided to gamble. Such a measure in France could only pass in time of a great crisis, not the case today, or after a major electoral victory. Not only it failed miserably as the left encountered an unexpected last minute boost, but it cost the right 56 seats from the previous parliament. That is, instead of adding seats to their majority, the right loses more than 50.

Personally I am not upset. I thought that a projected 440 seats parliament for the right was too much. Not that democracy would be threatened since in France there are institutions, not the case of Venezuela where the 100% monochromatic assembly is sponsoring democracy demise. But the right in France has no common sense and the larger its majorities, the more mistakes they make. Good right wing French governments were always when the right had a narrow lead in parliament. If history is to be repeated, the Fillon government might now have a chance to be a smash hit.

The left does not have much to crow anyway. Until last Monday, before the sales tax scandal started, it was looking at the possibility of having less than 100 seats in the parliament and be thus a token opposition. And now this surprise reprieve will in fact open the gates for thorough recomposition. The Socialist party owes its "victory" tonight to the center votes this time going all to them at the second round (more than half of them went for Sarkozy one month ago!). And that as a courtesy of a political miscalculation that will go into the annals of French political history. The socialists were unable to motivate their voters and got that boost from elsewhere than their programs or candidates.

What is in store for the socialists is a revision of heir ideology and programs, looking for a way toward the center of the political spectrum to either reach an alliance with the disappointed Bayrou voters, or absorb them. Along the way they risk breaking with the radical left. Worse, they risk breaking their own party as a large faction of the socialist party wants to tighten its bonds to the radical left (Fabius) and another faction wants to become a real social democrat party (Strauss-Kahn, Royal?). The clean up within the socialist party had started tonight already when its first secretary reelected is known not to seek a new term in the next year socialist congress, but also when he and Royal announced that they are splitting ways: it seems that Royal now with grown up children and a socialist party to conquer and rejuvenate does not need a hubby anymore.

There were other good news: the Communist party only got 18 seats. More perhaps than expected a week ago but still not enough to form a parliamentarian group which requires 20 deputies. There is a renewal in store for the commies, either become socialists once and for all, or join the radical Trotskyte left.

All in all I am satisfied with the results. Sarkozy will have the means to effect the necessary changes but his possible excesses will be reined in. The socialists will be in a better position to do a serious aggiornamento. A 100 seats representation could have browbeat them into a scared fake unity and a postponement of their internal reforms. Now there are enough of them to divide if necessary, plus three national elections to settle their internal issues before the next presidential and parliamentary vote. The Communists keep on their way down and the radical crowd is unable to place even one seat. As for the extreme right National Front, it is back to its historical low.

First, let's observe that again, with paper ballots individually counted, about a couple of hours after the last polling station was closed we had the all but exact composition of the National Assembly. Here in Venezuela, well, you know....

French cartography is good. Liberation already has the map and the total vote count of the second round. The Le Monde map is better but not quite complete yet. So Libé it is (the above one is from Le Monde by the way) 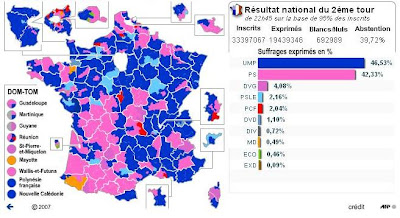 From this we can see clearly the division in France. Areas of modern industries, of European oriented economy, of services, of large immigrant population, tended to vote any shade of blue (Paris, the Parisian West, the East, the South East, Lyon). The areas voting from pink to red are the areas of a more agrarian nature, more afraid of change, of old economical tradition now in trouble (the old mining North, the South West far from European buzz, except for the resort areas all voting blue, agroindustrial Brittany).