The Chavez administration probably hoped that after a week end of partying students would finally go back to school and study for their finals. Not only it did not work, but the protest increased to a huge march today, now with faculty included. And what is even worse for chavismo, all in a peaceful mood which has forced the near brutal repression to downgrade itself to your average normal order service.

Oh, there were a few glitches of course. For example, now that we are under a not that veiled military regime, some stupid Captain, thinking he had more power than he really did took upon himself to stop buses coming up to Caracas full of students wanting to join the march. So, this lout thought he would scare students but these just decided that if they could not go up to Caracas no one else could. Soon, as the ARC was falling into a deadly lock everyone was allowed to Caracas. I wonder what that Captain learned today: democracy or shooting first? And that sad scene repeated at many exits of the ARC. Funny detail: Iris Varela claims that the students were sabotaging, "esos niñitos" she said, while Globovision showed the Nazional Guard trucks blocking highway access! Then again Varela has been living in a parallel universe for quite a while. 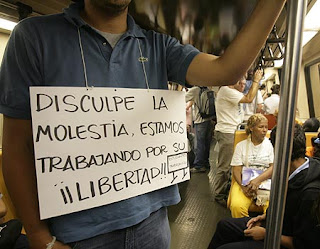 Creativity has been marking this week. Students do not have the hang ups of traditional political parties, which by the way are not only told to stay away from them, but seem to be as creative as chavismo in dealing with the situation. Some students decided that the downtown areas of Caracas could not be “chavista only” areas. So they started haunting the subway stations with placards and taped mouths. The picture I chose is just of many doing the rounds, and even made as a section in El Universal here and here.

And speaking of uncreative measures. Today to counter the huge, beautiful and successful student/faculty march Chavez could not find anything else but to call for yet another cadena. Even the little bit of Globovision that reaches the country is too much for him now. Chavez cannot tolerate to be upstaged by anything, not even students who paint their hands in white so that the word peace shows better. In this cadena he announced the same old, old canard with a slight new twists: now Bush is making a slow motion coup against him. I agree, it is obvious that through e-mails George Bush spends his days telling students what to do and when. Apparently these students are just something before something bigger comes in two weeks. Or some other crap that only the pro Chavez lunatic fringe is able to swallow bait, hook and sinker. Someone should check out the medication dosage of Chavez.

But chavismo is not doing much better. The faces of chavistas officials and their inner contradictions show every minute as they switch positions not knowing well what to do. Of course it might be all a strategy to gain time while they come up with some credible option. But right now they seem to be realizing that their own staged pseudo student defense rallies, all red shirted, singing the new version of Heil Hitler, “Patria, socialismo o muerte”are failing to convince the opinion when multicolored students place flowers on the weapons of the Metropolitan Police.

Clearly , on the image war chavismo is losing big time these days. And it certainly does not help when COFAVIC trashes the nation’s Ombudsman who refuses to act his part in protecting civilians by daring to say that whoever Chavez government jails is no one else business. I can see Mundarain in some choice seat someday at the International Court of The Hague.

And let’s not even touch the trashing received by chavismo after the fact finding mission of Reporters Without Borders, exposing clearly the strictly political motivations in closing down RCTV. That report is sure to rouse soon another set of insults from a discombobulated Chavez. A little paragraph is worth quoting, just to give you the idea (my emphasis):

"Widely condemned abroad, RCTV’s closure was much more than just an administrative measure. It was a political move without precedent in Latin America, a key element in a government takeover of the broadcast media that is part of a determined effort to control and occupy the entire public arena."

All quite fascinating. I am not sure if this will be enough to unseat Chavez anytime soon, even though something new has started. After all when you read what some of his supporters in public offices are capable to say, geeeee, you wonder how come they have not shot students yet. These people are rally losing all sense of measure. The question is: are there enough people with common sense left inside chavismo to stop the extremes before something terrible happens? Sometimes I am afraid not…