" We reject the cadena of today. We reject that the country was forced to watch us at the National Assembly. We support that people watch us if they want or not."

Or something like that. They APOLOGIZED for the National Assembly making a cadena of the show!!!!!! Beautiful! 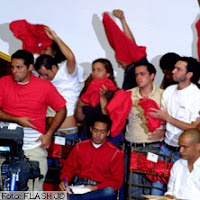 Best Image: When the students removed their red shirts in the middle of the National Assembly. They all came in with a red t-shirt above their clothes and at some point Douglas Barrios said they should not be required to wear a uniform to speak up. And then, they removed their red shirts. (video here, hat tip B.; you need top wait for the very end when the red shirts are removed)

Scariest moment: one of the students carried a video camera and she filmed her exit from the National Assembly. She filmed the people insulting her, threatening her, throwing things at the trucks she was put in for protection. And yet she filmed and filmed.

Best shock expression: too many to decide but all from Cilia Flores. The petard she planned to throw today blew on her face. Oh, sure, chavismo will accuse the students from cowardice to anything lower and claim victory. But the grimaces of Cilia Flores, the N.A. president, tell us that in spite of her intellectual limitations she knew quite well what happened and that she blew it.

Best new leader: well, so many keep appearing among the protest movement that one has a hard time to follow up. Today it was the turn of Douglas Barrios and Geraldine Alvarez. But more important perhaps was that the leaders of last week are able to share the spotlight. It is nice to see that Yon Goicochea or Stalin Rodriguez have no problem sharing the center stage. No chavismo autocracy here, plenty of fresh new voices coming. There is no rush to the microphone.

Best sign that chavismo is hurting after today: at 18:03 a new cadena is starting, to silence obviously Globovision (how long until they close it? should we make a poll?). And guess what, the cadena opens with the national anthem while the camera pans people dressed up with a red shirt which has printed on it UBV for the chavista university. and guess waht? the excuse is the "aldeas univesitarias", proving if need be, that all of today was staged by the government, hoping to crush the students this morning and then pretending to prove that students had no reason to protest. Heck, he is buying them with scholarships and "aldeas", so it is a small price to pay but to lose a little bit of freedom of expression, no?

Most cynical moment of the day: a tough decision since we must chose between Tascon saying that he has nothing to apologize for, and Chavez current cadena. I am sure that by the end of the cadena Chavez will have won handsomely. So, the cadena excuse, inauguration of some "aldea univesitaria" is all bull shit. To begin with, an inauguration from inside Miraflores? Gimme a break! But guess what, Chavez took the speech of Douglas Barrios and attacked him! The president of Venezuela dishing the speech of a student!! Amazing. Bull's eye for Barrios!

But that was not all: the students of Chavez that were at the N.A, this morning are in the attendance and Chavez is congratulating them individually. Now, does anyone at this point thinks that the event of today was not a trap? Was not organized for pro Chavez propaganda purpose? It did not work out quite well for chavismo but they have at least the merit of forging ahead with their agenda.

PS: 19:29, the cadena still goes on. Clearly designed to shut up Globovision and any of todays students to be interviewed. since it started I did my exercises, watched the French news and will go now to take my shower. Meanwhile all of Venezuela is subjected to the cadena, we cannot escape it. Did Chavez hear the best line of today? Or is he doing his cadena to piss her off? Where is freedom of expression when the freedom of information is grossly and vulgarly killed through constant cadenas?

Worst creep of the day: no contest, Hugo Chavez. It is 20:07 and the cadena keeps going on, now shutting up Grado 33. I name the Globovision shows because they are the only ones on TV where today's event would be given a fair presentation. And Chavez gets the top creepiness award of the day because of his two cadenas and because he called the students that refuse to submit to his will "peons of imperialism". Now, how much more creative can Chavez get? So, what is he planning to do with the students? Will he go to the logical end of his thoughts and jail them? I mean, if he has the evidence to prove their association with the "imperialism", Chavez has to arrest them, has to repress them. So when are you going to do your work Hugo?