OpEd pages are fond to make comparisons between Chavez and Carlos Andres Perez, CAP, the former president who Chavez tried to unset in 1992. And eerily some of these comparisons do hold because both are ambitious loud mouthed politicos, except for one basic difference, CAP is a democrat and Chavez is not.

It seems now that the closing of RCTV will have been the equivalent for Chavez of the riots of February 1989 for CAP. Then, freshly elected with a strong mandate based on more than 50% of the popular vote, CAP decided to launch a shock therapy and apply a neo-liberal economic system to Venezuela. Whether the system was indeed neo-liberal is not the point here, the point is that the people who elected CAP for one thing, were getting another and did not like it.

CAP first term in the 70ies was when populism started in all earnest in Venezuela. This first major oil boom, followed by an oil bust under his successor Herrera, allowed CAP to have a very pro nationalist and very social services and cash payment policies. It included nationalization of the oil industry, all sorts of social programs, corruption wherever you looked at, and even gifts to foreign country such as ships to landlocked Bolivia. Nothing that Chavez did not do in the 8 years he has been sitting at Miraflores. But CAP had two achievement for which I personally will be in debt: decreto 21 which allowed Venezuela to have decent toilets outside of Caracas and FUNDAYACUCHO of which I was one recipient. Chavez has yet to boast of two successful programs such as these, programs that improved durably the quality of life for Venezuelans we must travel around the country and programs that opened the world to a new generation of Venezuelans who went to study overseas and brought home the idea that there surely should be a better way to do things than what CAP himself was proposing…. An idea which, by the way, seems finally to come home to roost even if three decades went by.

But CAP 2 was about something else. Neo-liberalism, “très en vogue” then, was applied as a shock therapy right after CAP was sworn into office. The people who voted with the memory of the populist first term of CAP never accepted it. It started with the February 27 riots. But even if the programs started to bring in some positive results by the end of CAP tenure, he never recovered from his shaky start, receiving in 1992 two coup attempts before he was finally ejected out of office by his own party on a corruption trial that would look ridiculous in the corruption investigations of this Bolivarian Republic. 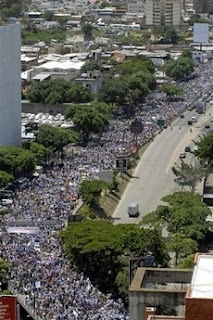 With the closing of RCTV and the student protests of these past weeks we can see again eerily a repeat of our social movements for the same causes with a similar arrogance blinded leadership. Through 2006, even if there was some talk of XXI century socialism, people pretty much voted again for Chavez because they were thinking Misiones and cash grants. They were thinking populism in the now traditional Venezuelan paradigm. But what did they get? Constitutional change, hard socialism, promises of gasoline increases, nationalizations that made no sense, closing of RCTV and more. All read as hardships, even if Chavez pretended to pass them as necessary hardship on the way to an idealized socialist society. In other words, the aggressiveness of Chavez post December 3 was perceived like a shock therapy of sorts, and, well, people are not buying it.

The closing of RCTV had the same catalyzing effect that the public transport price increase of 1989 did. If we did not get riots in Venezuela this time, yet, we got a creative and pacifist student movement. And we are seeing already the first effects of this movement as some stirring is clearly detected in the barrios of Chavez. Not necessarily as solidarity with the students, but because of an understanding in the population at large that something is not working. If the students are worrying about freedom of expression, the barrios are working about empty shelves, about not being able to get in a single shopping step all of their basic food items. The marching students, the closing of RCTV are suddenly starting to give a new, dissenting voice in some popular neighborhoods who are not willing to give up on what Chavez has given to them, but who are not buying the next moves of Chavez.

You doubt that effect? Look at the government. Talk of the urgent increase in gasoline price has been ended. Constitutional change discussion has been postponed until next year. Chavez even announced that no new nationalizations were necessarily and surprisingly producers are finding the ministry doors opening again for private business to discuss ways to increase prices as the only way to generate the necessary investment to increase production. Oh, all very discrete of course, but very real even if behind Chavez back. In fact, things (polls for example) must be bad enough that Chavez had to travel to Havana without warning, even summoning Ortega of Nicaragua, to resource himself as he suddenly lost the political agenda of the country to a few thousand students marching in the streets with painted white hands as sole weapons.

There, the only thing Chavez can find to say while in Cuba is that he is discussing the opening of a cooking gas plant in Cuba when shortages of cooking gas in Venezuela are becoming a problem. Just as it happened to his nemesis CAP in 1989, Chavez is safely in power but has suddenly lost his touch. The consequences of this will not play out today, but will play out later in unexpected ways. Maybe Chavez will come from Havana ready for repression. Maybe he will eventually be ousted from office by his own people who have no desire to sink with their boss or lose their amassed riches. Just as it happened in 1993 with CAP.

One thing is certain, any political honey moon that Chavez might have had in December 2006 is now completely gone.