Newspapers have been carrying this week end this lovely advertisement from Caracas mayor at large office (click to enlarge). 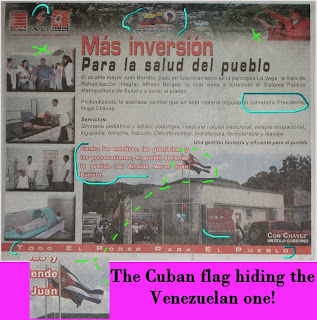 In this ad Barreto glorifies the inauguration of a rather small looking facility. I have seen bigger works inaugurated by Chavez that did not deserve a half page in El Universal....

However the ad has everything, two images of Barreto, one a montage with Chavez on the top right, where they are pointing to the future I suppose. It also has the words "comrade Chavez". and a few tired slogans. It even has, one wonders why, the logo of the Copa and the logo of Barreto own pet TV, Avila TV, where he plays at having his own TV just as Chavez has a half a dozen at his service. It is almost quaint.....

But that is not the most offensive thing. The Cuban flag floats over the facility and even hides the Venezuelan flag. Provocation? Deep brain washing of the town hall PR personnel? Plain incompetence? Extreme sycophancy? True, there are surely a few Cuban medics in it but the bill is footed 100% by Venezuelan monies....

Obviously there is a psychological pattern to Barreto's behavior...

Email ThisBlogThis!Share to TwitterShare to FacebookShare to Pinterest
Labels: chavisterias