The little incident with a reader two posts ago made me think that perhaps it was time to refresh the rules section of this blog. Also, looking at Quico's blog where there are comment rules on his haloscan feature made me look into it and try it. Thus I put this same picture below on top of my haloscan section, and after this picture I will give some details as to what this means. 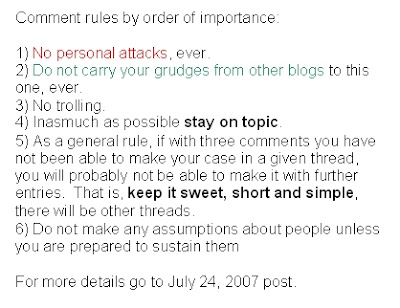 The picture did not come out to great but I will work on it later. Meanwhile the reasons behind the rules.

Comment rules by order of importance: My subjective order of course. Or as they say, my blog, my rules.

1) No personal attacks, ever. That makes me see red. Not that on occasion someone does deserve a rather strong comment, but usually there must be a solid story behind.

2) Do not carry your grudges from other blogs to this one, ever. The green is a little bit the green of envy, of jealousy, the green that some people experience when their prey escaped them from another comment section and they track their nemesis to the pages of this blog. For some reason this irks me enormously. Whatever fight happened in, say, Miguel's blog, has nothing to do with the threads of this blog. That does not mean you cannot refer to such instance and comments such as "please, fulanito, do not start again on that" can be acceptable, on rare occasions. But details on "that" are never welcome.

3) No trolling. Obvious, no? Though sometimes a little bit of very light trolling can start a conversation. I will be the sole judge so you use that technique at your own risk.

4) Inasmuch as possible stay on topic. Yes, I know, there might be breaking news and what not. But in general I try to write focused and complete post and I like to discuss them and bring more information from the readers who might post. So yes, we can stray, but not too often.

5) As a general rule, if with three comments you have not been able to make your case in a given thread, you will probably not be able to make it with further entries. That is, keep it sweet, short and simple, there will be other threads. Well, this is what in general has tended to sink other comment sections into useless and boring infighting, and usually because the rules above were ignored. Another way this could be written is "do not feed the trolls" but that does not cover it all. The real aim here is that I prefer a thread with only 10 interesting comments than one with 100 comments where only there people participate. It is boring, I must approve all of them and I have no time for it. A great blog is never defined by how many comments appear at the end of its posts. Actually, some of the best blogs around do not even have a comment section!

But I am putting this rule on 5th only now because a long moderation of this blog has in fact created a certain pleasant climate and it is rare that people violate that rule. The only one that does it seems to be me but then again as the host I feel the need to reply to as many people time allows me.

6) Do not make any assumptions about people unless you are prepared to sustain them. This is a new rule. I do not know whether it is the current political climate or what, but I have noticed a tendency for people to assume all sorts of things about the other visitors. Remember, this is Internet and people can be whatever they want. Take them at face value and only discuss their ideas. Otherwise you will quickly end up breaking rule number 1!!!

Last December I wrote something to the effect that this blog would from now on not be welcoming very much of PSF and other assorted chavistas. I think I should once again restate why.

After 8 years of Chavez rule, very few people at this point are going to change their mind in the anti Chavez camp. We have seen the man, we have taken his measure, and for those who live in Venezuela like this blogger, there is very little that a PSF can bring to the discussion. We do not like Chavez, we do not like his militarization of the country, we do not like his intolerance and there is absolutely no evidence that these three things are improving in the least bit. And no amount of social programs, assuming they are successful, can compensate for the the three items just listed.

That does not mean that pro Chavez folks cannot come and post, it means that they should chose better what to write about. For example:

* saying that Chavez was right to close RCTV because media should not be private hands is a troll. It is a troll because Chavez has privatized the public media of Venezuela to his name, and they know that very well and agree with it. It is the hypocrisy of such a statement that is not welcome anymore here as we have no more time for that B.S.

* on the other hand saying that you think a specific social policy is good and explaining why is perfectly OK (though I have yet to see that happen in here or any opposition blog I have ever visited). After all we might have missed some worthwhile initiatives and we might gain in knowing about them even if there is no way that a given social program will change our mind on Chavez. Still, after 8 years in office, chavismo is bound to have learned to do a few things right, no?

In other words, for any chavista that might have reached this far into this post: you have everything, all the TV, all the cadenas, and more and more. In here we want peace and quiet, a safe place where we can trash chavismo among us. We do not need additional grief from you, and as the host I take very seriously the role of keeping this comment section welcoming for anti Chavez folks. If you do not like it I will remind you that there are plenty of other blogs where you can go and slug it out, but not here. Here you respect our anti Chavez position or move on.