Chavismo has a way to attract the strangest fauna around for its service. Tonight I am in the mood to report on such people as one would report on bird sightseeing.

Definitely the students that defended the revolution on that famously infamous National Assembly show are having a good life. In fact, some are already making salaries with figures that 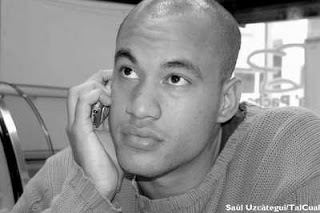 they could only expect after years of professional career from their graduation. But the bolivarian revolution offers some surprising riches to the ones willing to swallow hard and laud El Supremo.

Tal Cual reports this delightful gossip that I doubt very much will silenced. The guy on the picture on the right is Hector Rodriguez, one of the pro Chavez "students" that came to fame last June. Well, since then not only it was reveled that these students were almost all already in some Chavez payroll, but apparently some of them have increased their income significantly. Apparently he has become a consulting agent for the National Assembly and he might be receiving a general monthly remuneration package in the 8 numbers. That means 10.000.001 VEB at least which at the official exchange rate is 4650 USD per month. In Venezuela this is A BIG monthly pay check, executive level pay.

Tal Cual note also points out that such jobs do not require to check the clock, are not too heavy, allow for other miscellaneous activities and are frequent among people "in transition". Tal Cual even cites Elias Jaua as one of the past beneficiaries from these "grants" until he became a minister again.

I did mention Eva Golinger the other day. Well, apparently she made up the robbery she claims she was a victim from. Her neighbors have simply stated that there was no evidence of the larceny. But that should not surprise us as Ms. Golinger has made up a lot of things about her past life as Alek Boyd has had so much fun unearthing. so, since her idea of creating a "Golinger list" to hang journalists that do not support chavismo is frowned upon even by some high ranking chavistas, she probably decided to victimize herself, again..... Anything for a laugh.

Chavez big time harlot (and she happens to be, or was, a Bilble thumper at that!)

This one is Luisa Estela Morales Lamuño, the chief justice of Venezuela. Well, in a hurry she has already announced that:

1) the National Assembly will not be allowed to modify substantially the Chavez constitutional proposals. They are his and the N.A. has no business meddling in such things. Huh? Is she not interfering in the separation of powers herself by sating that? Is she not submitting herself to Chavez will by stating that? Has she lost all sense of "keeping up the appearances"? Not that the N.A. would modify anything anyway, so why such statement?

2) the High Court can only rule on the constitutionality of Chavez proposals ONLY after they are passed. Yeah, right, after the referendum she will start interpreting what Chavez really meant...

3) if the referendum passes (what, there is a possibility that Chavez will not get his way?) the new rules will apply on the spot and Chavez current term will be extended by one year.

I do not about you, but this woman mutterings should be enough to have her disbarred on the spot. Oh, wait! she was removed once!! but she was put back and now she is the top justice!!! Seriously now, who will dare to tell me that the judicial power in Venezuela is independent?

I have a idea for Hugo: add another proposal to allow you to name the justices directly. It will not change a thing in the way the country is managed and it will save us time and money on the judge "search" procedures.

PS: Luisa also said another major stupidity, strictly designed to ingratiate herself to her boss (at least I hope so because if she agrees with what she said then she is stupid AND ignorant, a deadly combination). She simply said that the "conuco" is the perfect form of agricultural production. I could write a whole long post to trash the woman but Miguel already caught on her so I need just to refer him. Let's just say that I think Miguel was too soft on Luisa.