Christmas shelves in Venezuela: something is missing

It is common knowledge around the world that some food items have left Venezuela's shelves. Plenty of excuses have been offered to account for the absence of milk, sugar, beans, noodles and more. For example, conveniently, the world prices of milk and wheat have been going up. That might be but these items are not any scarcer in the shelves of, say, Colombia than they were a few months ago. Another good excuse advanced by chavismo is that the poor in Venezuela have such a great income that they are snatching milk from the shelves faster than any rich person can do. Of course, all of these are just that, excuses, and any serious economist laughs at them.

This afternoon, around 4 PM I happened to have to go to the San Felipe Central Madeirense grocery store and I also happened to be carrying my camera. So, as I have done at regular intervals, I took the necessary pictures to show the reality of what is it like when shopping in Venezuela (you can compare with my past pictures, some of the very same shelves at different times through the year). Note: in deference of those who still do not have broadband I put small thumbnails, click to enlarge and get the full effect.

Let's start with what is missing, milk, sugar and beans. For milk I have two pictures. The first one is for the fresh milk shelf, where milk has not been found by yours truly for now about two months. You can see juice and yogurt (yogurt? where do they get the milk for that?) and on the left a gap. But be reassured, it was the guy arranging the shelves (the hand) because that gap is for more yogurt, the store has long stopped saving some space for fresh milk that never comes. 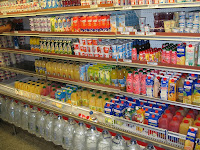 The second picture is for the "no refrigeration" milk section. No powder milk can be found. No long duration milk either (U.H.T.) No skim, fat, whatever milk. Only on occasion you see a fake milk based on soy. They eventually all leave the shelf but there does not seem to be any stampede. So, what does the shelf carry these days? The only milk is circled in blue and it is condensed milk. Maybe good for kids though I doubt that a glass of sweetened milk a day can be good in the long term for their health. You find a little bit of special formulas for infants, the top green circle. And, an oddity since it is not very popular in Venezuela, today I found some chocolate long conservation milk (another item that cannot have good long term effects on kids). They are at the very end. And the rest you may ask? All is heavy cream!!!!! Canned or long conservation!!!!! 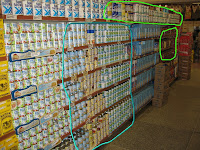 The next missing items are sugar and beans. I had reported that if white sugar had been missing SINCE LAST YEAR, one could still find brown sugar available. This has also stopped as brown sugar is now almost as rare as white sugar. Today you only had a few blocks of "papelon" left, circled in blue, at the near end of the galley. This is of limited usage as it has a strong taste from the raw sugar cane and it needs to be grated before use and does not dissolve fast. Except for some dishes and "papelon con limon", it is of no use. But that is not all we can observe in this picture. The green circle is for beans. That is right, the choice of bean was today limited to some gray beans. And not that much of them. However above the shelf circled in black you have plenty of microwave pop corn. Draw your own conclusions. 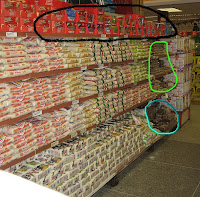 And now for the last item missing. Though in all honesty I should qualify it as scarce rather than missing though I am sure it will not be long until it is gone: PASTA! Only two brands circled in green. Only one had some choices of different pasta style for different dishes. Once upon a time this shelf was crumbling with the amount and variety of pasta, and most of the time some the pasta was stacked directly on the floor, disrupting traffic. Now, well, the passage is clear and half is corn flakes or other unrelated items. 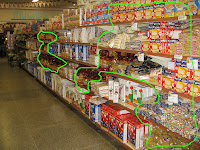 OK, so far we could still try to buy the argument that the poor have now more money so they can eat, finally. Let's even make the exception that Central Madeirense is too expensive for the poor to begin with so that it is very unlikely that they are the ones who emptied Central Madeirense shelves. They would have started with Mercal shelves first, no? Thus even that chavista argument ends up working against them as we see that Mercal cannot satisfy the needs of the poor, the very reason for the existence of Mercal.

Which brings us to what is left in the store. With Christmas coming the shelves have started filling up with imported goods. I will start with a picture of a stash or "panettone", that lovely Italian egg bread that we gorge with at Christmas. In this dispoaly it surrounds a few bottles of Scotch in promotion. Not good Scotch but Scotch Whiskey nevertheless. 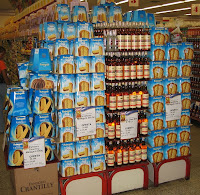 But if you do not care much for Scotch you can buy Spanish sparkling and alcoholic cider, another holiday favorite! With yet more Panettone on the right side! 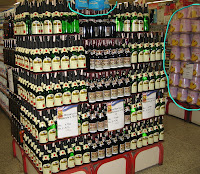 There is also plenty of wine and many on promotion. But that happens all year round even though Venezuela is not really a wine drinking country and even less Yaracuy. however the "turron" has arrived in many o f its varieties, most imported from Spain of course, as circled in the picture. The little Christmas cookies on the right might actually be manufactured in Venezuela but I did not check.

But you know what? There was also a promotion on Perrier Water!!!!!

Perhaps someone could explain me why in the bolivarian revolution we have no milk, no sugar but we have Panettone and Perrier? I would advise the reader wanting to reflect on this paradox to read the article by Luis Pedro España translated by Miguel the other day "Hummer for Eggs". I recognize of course that this article is in large part the inspiration for this post and I wanted just to show its reality in San Felipe (where a small city of 200 000 people counts at least three Hummers).

But beyond the reality of excessive state intervention and the deliberate weakening of the private sector, the crude reality is that if the poor will not be able to afford Panettone or Turron, neither will they be able to make simpler home made Christmas sweets since they cannot find eggs, milk, flour and sugar. Some revolution, no?

Let's them eat Panettone someone said at Miraflores.

UPDATE: as it turns out Katy was also writing of milk shortages in Maracaibo. The link here will tell you more about it and illustrate how far people are willing to go already for a couple of pounds of milk. By the way, the Nazional Guard had to be called up in San Felipe last week at the Central Madeirense. Since everybody has SMS in a few minutes, when milk arrives, you can have 1000 people clamoring. Management decided to call the guard before the store risked rioting.