Well, it looks like Simon Romero had good seats and the New York Times had already this stunning view on its front page (web, no paper here to check). 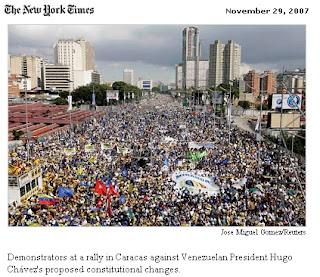 But we also see that Simon Romero has learned a lot since he is in Venezuela. The title of his article says it all : In Chávez Territory, Signs of Dissent. That is right, the Bolivar Avenue had been denied to the opposition since 2002 and today the government could not stop the opposition to come shout at Chavez in what he thought was his own backyard. The video of Globovision on the march is glorious, the weather collaborated and you can see how packed was the audience. Let's see when will it reach Youtube. Chavismo has its work cut out tomorrow. In fact I am putting myself on record that chavismo is going to flunk its test of the Bolivar tomorrow.

Addenda: the manipulation of VTV, with outright lies, is described here (Spanish, hat tip MM). Read also comments for this.