A poll in the streets and polls on line

Today the students are undertaking the big challenge: fill up the Bolivar Avenue of Caracas, something that chavismo has managed to stop any opposition from doing since 2002. You may remember that during the presidential campaign of 2006, Rosales was not allowed to do so, even though he had no problem filling up the Libertador. You may even remember that in 2004 chavismo blocked access to the Bolivar avenue and the Recall Election final rally had to be held on Caracas main highway. It does not mater in a way, the Francisco Fajardo is even bigger than the Bolivar and the opposition filled it up. But there is a je ne sais quoi in filling up the Bolivar that cannot be ignored.

Times have changed. The student contesting that started in May this year is something new and the government has yet to find an effective way to counter it. That is why, in spite of trying to stop them from marching to the Bolivar, they had to bow and allow the rally. In fact, it might turn out to be a mistake as chavismo will hold its rally Friday there and the comparison could be fatal if they do not do as well!!!! The students even dared to challenge WITHOUT buses, only with Caracas folks. Chavismo will need to hide their traditional hundreds of buses ferrying paid visitors from the provinces. 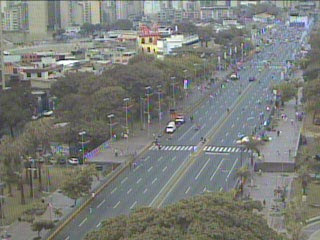 the Bolivar. The only image that I can offer you is the empty Bolivar avenue at noon. People are expected to start streaming in sometime after 2 PM. I am in San Felipe and thus cannot attend, something that makes me grieve. But Miguel will go part of the march and we have agreed that if he has some interesting picture he can send through his cel phone I will post it here for him. Thus, stay tuned.
While we wait to see if that real life street poll of today develops I can let you know about other polls circulating. AS some of you might know, the CNE has forbidden as of Monday that any media publishes or discusses polls. This by itself speaks volumes about the lack of confidence in a SI vote victory next Sunday.

But as a blogger of some reputation I have received three polls this week so far. At least one of them I was asked not to reveal the origin. Suffice to say that the three of them are from equally reputable sources and the three of them speak more or less agree (one is Datanilis, which I have already mentioned, I will mention the others if I get a green light on that).

The general conclusion, without factoring the Colombia spat that we do not know yet how it will affect the numbers is that the NO victory is based on participation. The three pollsters agree thaw the lower the abstention the wider the margin of victory for the NO. In fact, one even says that the margin could go above 10% which should make it very difficult for the CNE to cheat enough to reverse the result.

These results must be so close to reality that not only AD but even the Comando de la Resistencia have decided to go to vote in what must be the most stunning reversals we have yet seen this year.

Conclusion? GO AND VOTE. There is nothing better you can do at this point. And you can always protest Monday if you do not like the result.