This blogger was a mile away, at the end of the road below. Yet, if there were no phones, if electricity was shut up regularly for long hours, if neither newspapers nor cellular phones could reach him, there was a generator and Direct TV. 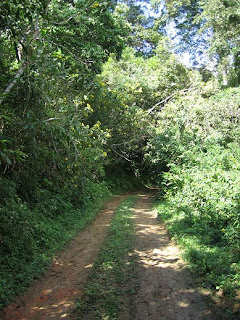 Thus, even in the middle of nowhere I was not spared the incredibly tacky show that Chavez has been setting up about the FARC hostages. By the way, considering that yours truly could watch TV in the jungle, I am pretty certain that the FARC from Colombian jungle could have managed the release of the hostages a little bit faster, a little bit more expedient than what they have been doing. Right there one is allowed to grow suspicious at how the whole business has been handled.

Because indeed I have been watching a lot of stunning moments. For example the arrival of “dignitaries” in Venezuela waiting to have news from the FARC. They will fly together to pick up the hostages. Nestor Kirchner in the jungle picking up hostages? Oliver Stone I can still understand as he might be looking for some ideas for his next action packed flick. Of course, Chavez who has had a bad year internationally is having gargles out of his speeches welcoming the “witnesses”. I even heard him saying that had he invited 50 (1000?), they would all have come. In fact Chavez is totally out of control on this show, donning even the military outfit, red beret and all. As if he were in campaign himself waddling jungle ponds as I have been doing myself these days.

Chavez declarations are even becoming indecent, inappropriate, vulgar. I heard him for example declare that in spite of all the falling out with Uribe (“platos rotos” broken dishes) if this one would allow him he would jump in a plane and fly over to Colombia to retrieve the hostages himself. But do not be fooled in thinking that maybe it is just Chavez high on something. No, it is a well concerted propaganda effort. These days watching the Venezuelan state TV one assists at a full fledged viva Chavez show. We have reached now such a crescendo over that that now the FARC have become guerilla victims of Colombian aristocracy. Never mind that Uribe was reelected with more than 60% of the votes. And we hear such incongruities as Isturiz speaking of a certain guerilla as been “an excellent guerilla” (excelente guerillero). No, I am not making this up. How do you rate such a guerilla? Kills only cops? Sends flowers on Mother’s day? Is from the FARC rather than the ELN? Feeds his hostages?

But why should Chavez again stop himself from rewriting history? After all people such as Sarkozy or Oliver Stone or Yolanda Pulecio are willing to jettison Colombian government just for the sake of effect or their own petty interests. At least in the case of Ms. Pulecio we can forgive her from having become a sort of Stockholm Syndrome sufferer in her despair at getting back her daughter Ingrid Betancourt. We can even find in our hearts to forgive her from saying that Chavez is “so humane, so caring, Venezuelans are so lucky to have someone who finally cares about hostages”. Has anyone told her that Chavez does not give a crap about the near 100 hostages held inside Venezuela?

For Oliver Stone words on the other hand I cannot find forgiveness. I heard him saying “great process, great guy” referring to Chavez as he arrived in Santo Domingo, Tachira. The master of conspiracy theory has fallen big time for the ultimate conspiracy of all as Chavez is trying to con half the world with his hostage release. No wonder that Stone makes the Michael Moore look good these days. At least Moore might over interpret the facts he handles but at least he starts from facts.

I suppose that the Chavez show will have some success among that crowd. After all, many of them are in such need of another hero (Tina Turner anyone?) that they are willing to cooperate fully even if deep inside they know it might be wrong. Does Kirchener ignore that the FARC has become a gang of criminals, drug traffickers, terrorists? Of course he has not forgotten, but he pretends to. After all, what else can he try in order to make the Argentinean people forget about the bags full of money sent to finance his wife’s electoral campaign? He can take a cue from ANY Venezuelan state TV, ranting non stop on the hostages putative liberation rather than discussing why December 2 the NO won, why milk is not returning on the shelves, why inflation is eating Venezuelan incomes, why crime this December will overcome easily the Iraq death toll for the month.

Because there are some elemental values that are too easily forgotten in this most hypocrite of shows: the victims here are not the FARC, they are the hostages of the FARC. No political organization can build its political career on kidnapping and ransom. Even Al Qaeda in this respect is better than the FARC: they limit themselves to kill. The FARC holds hostages AND kills them when needed. Or have all those people fanning over Chavez in Tachira have forgotten that a few months ago the FARC killed a dozen of its hostages when Colombian security forces threaten to reach the place where they were held? Have these people forgotten that there are hundred more of hostages in Colombia and Venezuela? Are these people unable to see that Chavez is playing them like a fiddle to legitimize the FARC so as to use it to unseat Uribe or whomever comes after him?

Fortunately the calm and compunction of Colombian authorities in front of this grotesque carnival are to be admired. I suspect that even in the short term Uribe will prevail over the over excitable Chavez, no matter how many movie directors he gets to help him stage his hostage reality show. Because where it matters, in Colombia and Venezuela, Chavez is not fooling many people. Then again since December 2 Chavez has stopped caring about us. His objective now is to look good in Paris and Hollywood so that he can screw us here without anyone growing concerned. Castro has managed it for decades, why should not Chavez succeed too?


PS: As I returned to Caracas and posted this no hostage has been freed yet. I have a simple question: if criminal Ivan Marquez has been able to visit Chavez at Miraflores Palace a few weeks ago in spite of being on the most wanted list in Colombia, how come the three hostages at stake this week cannot be dumped at some dirt road crossing, with a tent, water and food for a couple of days? The FARC would have plenty of time to bail out of Dodge before giving the GSP position. No?