The NO wins in Venezuela 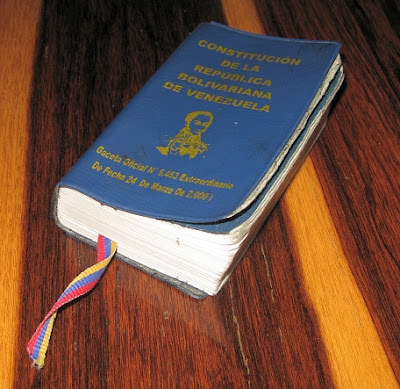 This picture is Daniel Duquenal worn out constitution that will serve for a little while still. He carries it around a lot and you can tell by yourself how often he has consulted it.
This is an alive constitution, that he does not like, that he did not vote for but that he defended when Chavez wanted to gut it as he pleased. Yes, that constitution needs some changes, probably needs to be rewritten in full because its Spanish is lousy, but it is the only thing that all Venezuelans have in common. Had the SI won tonight it would have become a red book that woudl have been used by one part of the country to control the other part. Thus it would have stopped being a constitution. In spite of all the obscene governmental advantage, all the threats and blackmails, the Venezuelan people found the strength to say NO.