Sometimes it becomes difficult for us to explain how our quality of life has been steadily degrading. After all, for the last nine years we have been making the necessary adjustment to adapt ourselves to a progressively worse situation. These progressive adjustments include such things as putting more bars on our windows so we hope to sleep tight, learning to do long lines even at private clinics as public health is not an option for many ills, factoring in our lifestyle commuting times which generally have doubled in the last five years,

But the other day while in Caracas I realized that even in the essential small pleasures of our life chavismo is robbing us. For example, today we cannot make "Arroz con Leche" anymore. In this respect the vain bolibanana revolution is a great equalizer: it is not a matter of money, neither the poor nor the rich can find the three basic ingredients of arroz con leche, namely milk, rice and sugar.

Perhaps the non-Venezuelan reader might wonder why arroz con leche could be such a litmus test. Let's say that arroz con leche is our basic comfort food, the one we inherited from our childhood years, the one for which there might be as many recipes as there are grandmothers. Arroz con leche is not just rice pudding, this infamous concoction found in Europe or the US. No, a good arroz con leche is soft enough that when you hold it on the edge of a tilted spoon it looks like forming a major dollop about to fall but it is still sticky enough to remain in the spoon. An art, high culinary art if you ask me (1).

Arroz con leche is also perhaps the most universal children rhyme in Latin America. Be it the rather pompous Argentinean version or the more simplistic Dominican one. It seems that each country has its own lyrics (I could not find the Venezuelan version so I am limiting here to the basic tune). Because we all sung it in our school yard, it remains with us as our essential comfort food, the one that ties us to an ever sunny schoolyard, the dessert we would not dare order in a restaurant but the one that never gets old in our refrigerator.

Thus of course it is rather dispiriting that since the last quarter of 2007 it is an increasingly difficult dish to prepare. Last weekend I was in Caracas and I visited a grocery store in the middle to upper middle class neighborhood of El Cafetal, a store where people do not mid as much to pay a little bit extra to get what they need. But even this acquiescence of the local customers is not enough. After all the Indecu, that selectively nazi price control mob, tends to strike more at such grocery stores. Of course, they are more likely to get there some payback of substance to stop them from closing the store.

Thus this week end I did a little photo report of the Plaza grocery store in El Cafetal, a very old grocery store which existed in the early days of El Cafetal when this one had not even a half dozen high rises (now El Cafetal has dozens and dozens of high rises lining up its main streets, but that is another story). The fact of the matter is that in spite of the population growth the Plaza has retained its original size and a feel of mom and pop store that I hope the pictures will transmit, even though they are a little bit depressing.

We will start by observing that there is no milk nor sugar.

The first picture is the former sugar section which know offers only fructose and a little bit of pastry grade powdered sugar, of use only in glazing. The section is now reduced appropriately to a specialty area close to the Mexican food ingredients. You will notice that even the beans used to hide the gap in the area are gently disposed so as to hide their very own limited quantities. But I suppose I should not complain: we had at least 3 types of beans which is more than usual... 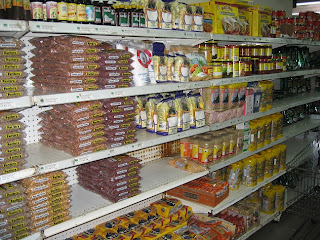 The next picture is the powder milk area. As usual there is nothing of the stuff, neither is the UHT versions usually stored on the right side. Even the infant formulas are low. There is though condensed milk, which I must add is not suitable for real arroz con leche as it makes it over sweetened. Condensed milk is a short cut to the real thing that any expert will immediately recognize. Not that I have anything against condensed milk which is great for "tres leches" or "quesillo", but it does not work well with arroz con leche. 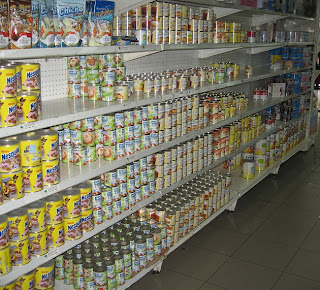 There is rice though. But only a single variety from a single brand, which is totally unsuitable for making arroz con leche anyway. A little bit as if you were trying to make sushi rice with Uncle Ben's long grain. Thus, even in reasonably affluent El Cafetal it is that rice or nothing. But you have diet Pepsi to go with. 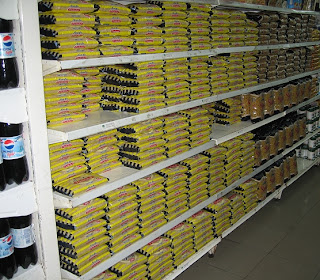 While I was there I looked at other staples.

The bakery stand was depleted, with only a few donuts left and three lonely breads still available. Wheat flour is becoming scarce too while the refusal of the government to allow for price increase in bread is, as usual, aggravating the scarcity created by the difficulties in importing the stuff. 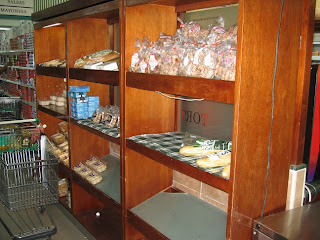 Of course fresh milk is gone for good. As is the Colombian yogurt which used to occupy a large chunk of that shelf. No butter either as what you see at the right end is diverse type of margarine. At last that one seems to be back in force. But imported whipped cream is available! 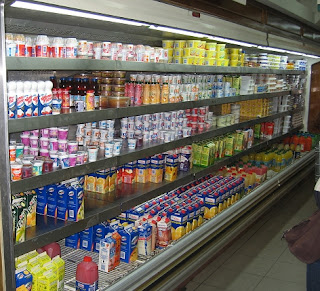 Coffee is the latest item joining the list of missing in action. The ridiculous effort by the government to block the prices, even though supplies to the producers have increased by more than 22.5% just in 2007 is finally showing its effect. In a country of coffee drinkers, now we are forced to buy the multinational disgusting Nescafe instant coffee or the decaffeinated El Peñon brand. Pathetic! Of course, the government does not control the price of decaffeinated and instant coffee so we are forced towards these placebos, like it or not. 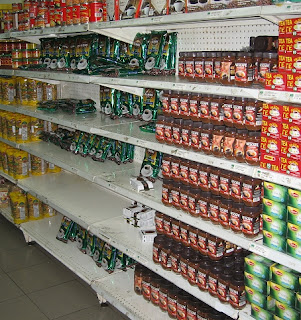 To complete this round up let's verify that the cooking oil situation has not improved. Only one brand of a soy oil which is not liked in Venezuela cooking. And at the right end expensive olive oil, increasingly coming at the free rate of the bolivar, that is, twice as much as the goods produced under imports favored by CADIVI, the currency exchange control organization which is making water from all sides. 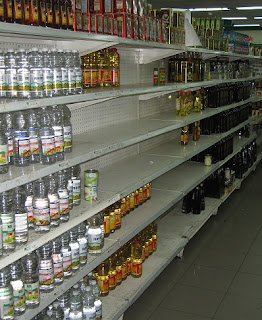 And to get yet another evidence of wheat floor problems (favorable exchange rate of that sector have also been downgraded) we can look at the cookie section. Once upon a time you could find dozens fo types of cookies. Now you will have to content yourself of soda crackers or "galletas Maria". 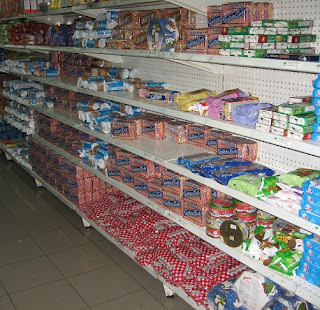 Other stores in Caracas do not fare much better. I went to the gigantic Exelsior in Santa Eduvigis and if they had more stuff than the Plaza, they were still completly out of milk and sugar and had only the same brand of rice.

And what does happen in less affleutn areas? After all, in the sotrs of El Cafetal and Santa Eduvigis, there are enough non controlled items sold that allow the store to compensate from what it cannot earn in reselling basic stapples. For example the Plaza sells kitchen trinkets, imported wine and Scotch, has a wide selection of hygiene and beauty aids. But what about the "abastos" in San Martin, Petare or el Valle where people cannot go past cheap toothpaste and shampoo, with a little bit of beer on week ends? How do the owner of these stroes manage to make a living? To compete against the unfair price structure of Mercal (which by the way is unsustainable as even Chavez has announced that some of its prices will be increased)?

I think that the government does not care. If the delicate network of mom and pop abastos in popular areas dwindle because of lack of stuff to sell and high crime to steal any meager earnings, the people will become even more dependent of chavismo for their food. A new from of indenture, where public employees are forced to shop at the store of their boss, the state.


1) curiously of all the recipes I found in the Internet the one that comes close to the real thing is the one form WikiHow. It is also the one that gives best the basics allowing the cook to make as many add-ons as wished.