Lately Chavez speaks less of Iran (after all, he speaks so much of the FARC and Uribe that even himself cannot find enough hours in the day to include Iran). Yet this country and its rogue 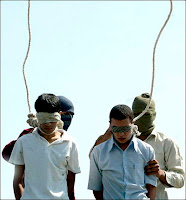 government remains a key partner. Well, I have been informed that there is yet a new gay teenager hanging in the works in Iran. That is right, in Iran Sodomy or any Gay Activity is simply punishable by death, either in the bowels of some prison or in public hanging.

This time there is a petition you might want to sign, stressing Venezuela as the country where you are signing from. There is little bit more we can do as even "closeted" homosexuals like mayor Barreto are not going to come out to condemn such atrocities. The picture on the right is from the previous hanging of teenagers in Mashhad.

So please, drop by this petition and sign it if you are so inclined.

By the way, there is in Yaracuy a covert campaign agaisnt Cocorote Mayor, Capdevielle. He cannot run again for Cocorote and he is thinking about running for governor in November. Well, since he is a leading candidate that could unite chavista and opposition under his banner, there are all sorts of rumors about his sexuality running around (I have been hearing these
"rumors" for 8 years now, and he is all but out of the closet officially). That I know of, these rumors seem to be coming more from chavismo than the opposition which is trying to court its support in joining a primary or some sort of deal. Though machismo surely makes equally strong ravages in both camps and if Capdvielle runs on his own "rumors" will come flying from both sides. I have no illusions on this respect. On the other hand Gerardo Blyde might be running for Baruta mayor and he might become, I hope, the first openly gay mayor in Venezuela, that is, if he comes out of his closet too. I think Baruta is ready.