Is Chavez seeking war with Colombia?

After Wednesday's new bitter exchanges with Colombia one is allowed to start thinking seriously how far will Chavez go in his stupid and totally unnecessary fight with Colombia. But before I go into that and people think I am an alarmist let me start to explain why there will not be a war.

No matter what Chavez in his delirium thinks he can get away with, the geopolitical reality of the relationship between Venezuela and Colombia weighs very heavily against Chavez and Venezuela. Let's list a few items without any particular order of importance.

Thus, considering that many people know how these parameters will affect any possible conflict, we can wonder if they will let Chavez push them over to the brink. I do not think so and in fact this could speed the violent ouster of Chavez by chavistas themselves who do not want to risk their newly acquired riches just because of the naked ambition of Chavez.

So, why Chavez, who surely is aware in part of what I write above, is gambling so dangerously against Colombia? Wednesday he went as far as accusing Colombia to plot his assassination without offering any proof (a well rehearsed line against the US even though we are still to see the first real concrete evidence of that). The Colombian government was prompt in issuing a very strong communique where basically they warn Chavez to butt off Colombian internal affairs, to show some respect as they show to him. In fact Colombia came dangerously close to qualify Chavez of terrorist himself by accepting all the terrorist practices of the FARC that he refuses to acknowledge.

What is more worrying, or should at least be more worrying for Chavez is that he is not finding support elsewhere except of Nicaragua and Cuba, both heavily dependent on Venezuela money, both with almost no risk from Colombia were a conflict to explode. Other leaders such as Lula are in no hurry to follow Chavez and are trying to stop him before he does the irreparable. Even Correa of Ecuador and Morales of Bolivia have been either silent of ambiguous. Elsewhere, the Washington Post printed an unambiguous condemnatory editorial where words were not minced:

"In short, Mr. Chávez was endorsing groups dedicated to violence and other criminal behavior in a neighboring Latin American democracy, and associating his agenda with theirs"

"The answer to this logic was provided by the press office of Colombian President Álvaro Uribe, who has been waging what is, in fact, a heroic battle against the brutal gangs that for decades have plagued his country."

""The violent groups of Colombia are terrorists because they kidnap, place bombs indiscriminately, recruit and murder children, murder pregnant women, murder the elderly and use antipersonnel mines that leave in their wake thousands of innocent victims." All these assertions have been well documented by Western human rights groups that are otherwise hostile to Mr. Uribe's government."

"Latin American leaders who until now have seen in Mr. Chávez a crude populist who buys his friends with petrodollars are faced with something new: a head of state who has openly endorsed an organization of kidnappers and drug traffickers in a neighboring, democratic country"

France and Germany, did not show any support either. There was even a great Liberation editorial which can be compared with the vile propagandist and inaccurate article from the Le Monde Diplomatique (note, NOT Le Monde who is a serous journal and quite anti Chavez), who like Ortega and Castro lives of the largess of Chavez. The manipulative nature of the Diplo work, obviously written in a hurry, shows clearly why this paper has lost any relevance among the cognoscenti of the world, having become what in Venezuela we call "un pasquín".

In brief, it is turning out to be a major foreign policy blunder for Chavez which will cost him more, much more than his failed UN speech. So, why did Chavez took such a demential risk?

The reasons are very simple, he needs desperately to distract Venezuelan attention over his now catastrophic mismanagement of the country.

And to this we could add another reason: the ill health of Fidel in Cuba, the lack of certainty that Raul will be as supportive as Fidel was, the weakened state of the FARC, are all powerful reasons to roll the dice and gamble the future of Chavez career once and for all. When people are in a hurry, and ill advised, that is when their worse mistakes happen.

Del apuro lo que queda es el cansancio.
(From haste, exhaustion- ?-)
PS: added later. As luck has it, Weil gives us a 4th cartoon in a row on the current situation, and a cartoon that fits like a glove the long post above. Translation of what Lucifer is telling Chavez: "it is a sure thing, 1) you are financing your true army, 2) they free the hostages, you get the peace Nobel and... 3) you wreck your country's economy." 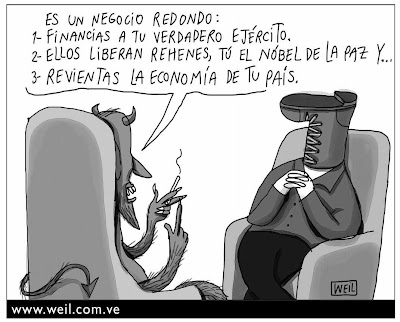