It has been in every headline so I need not bother putting up a link. Fidel Castro has announced that he will not seek to renew his job in Havana. That is, he is stepping down from his unelected

position of dictator for life. A rather nonplussing event. After all, as long as the living mummy can still talk he will have influence in Cuba and still can create trouble to whomever replaces him. But that will not be for too long as his days are definitely numbered (or why else would he step down?). Nothing much will change in Cuba in the very near future. The "new" folks will politely wait for Fidel to pass away once and for all and then they will have to move toward a democratic transition. The longest dictatorship in the Americas will thus come to an end. And Fidel will have managed one last feat: to have had two long Fin de Règne, his almost two years of sick leave and the months ahead until he finally dies.

The French did coin that expression, Fin de Règne, which full flavor cannot be satisfactorily translated. It means, literally, end of a reign; but it means much more. I suppose that the French used to long twilight historical periods, when exhausted kings hung unto power for a too many years, coined that expression to describe periods where an aging king was expecting his death (Louis XIV and XV in particular). During a Fin de Règne we all know that an era is

going but we have no good idea of what the new era has in store for us.

Democracy did away with this feeling since elections and term limits allow us to have clear expiration dates and offer us the means to prepare the succession actively. Thus, for example, George Bush present irrelevance is not a Fin de Règne: he will be gone in January as the US folks are busy selecting his substitute. The US political culture coined Lame Duck for this feeling of presidential term exhaustion. But Tony Blair last two years had a clear Fin de Règne feel as people were more interested in his departure date than anything else.

Hence the last exploit of Castro, to have ended his very own Fin de Règne since he became sick, and to have started yesterday the Fin de Règne of his own regime which will last for who knows how long. Raul Castro is already old enough and we can expect his tenure to last much less than a decade. How much less is yet to be known but Castro has bestowed on his brother a Fin de Règne feel that will besot him all during his tenure. In modern political jargon Raul Castro tenure is a "transition" period, but the feel will be of an old order slowly dying.

We are also seeing this in Caracas. After 9 years of nearly unhinged rule Chavez is running out of ideas, out of people, out of worthy goals. Since December 2 we have entered our very own Fin de Règne. True, Chavez has still 5 years in his presidential term but these look quite empty now. A defeat in the regional elections of November and continuing food shortages could shorten his tenure (last week we saw in his home town of Sabaneta a grocery store looting). This in turn would spell a certain defeat in legislative elections two years later, if not an earlier set back through a direct recall election on the inane current National Assembly. That would be the nice exit out for Chavez, to be stripped of most of his power and be forced to resign and retire. Perhaps he could so in Raul Castro's Cuba to be away from judicial charges that will rain on him once his regime is over.

Or perhaps Chavez will take the violent road, openly cheating on election and transforming Venezuela into a new Zimbabwe. This would also be a Fin de Règne, but longer, sadder, crueler. 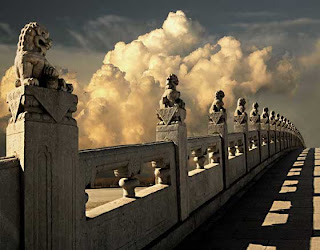 Whatever the future holds for us in Venezuela now we all know that times are changing. We already got our first shiver of an end to an era in May 2007 when Chavez closed RCTV. Now, that this abuse became the catalyzer of his defeat in December, we are in a true Fin de Règne. On TV we are starting to see humble people making Chavez directly responsible for their woes, not his appointees. The Teflon has worn out. The fear seems suddenly gone. Maybe the Misiones have stopped paying enough? The response of the government is the now stale, a tired endless repeat of empty slogans by the same recycled Chavez sycophants. Meanwhile the country is now showing all the signs of disaggregation, from the infamous potholed main roads to the increasingly empty shelves without forgetting the growing anarchy and the fear from crime. The opposition does not fare much better and is far from offering a well organized alternative. As a society we feel like standing a the foot of this bridge, knowing that the crossing is long and that yet we have to cross it without knowing what is awaiting for us on the other side.