For from the maddening crowd

Traveling outside of Venezuela for not even a week, but in a country where hotels have free WiFi all over, not like in Venezuela where they are way, way more expensive, and lousy WiFi if any. Here is the first picture clue, a blooming jacaranda lined avenue of the city where I am at. Let's see who guesses it first (don't bother magnifying it as much as possible, I tried to chose the right pixels to make it illegible). Tomorrow another clue if necessary. 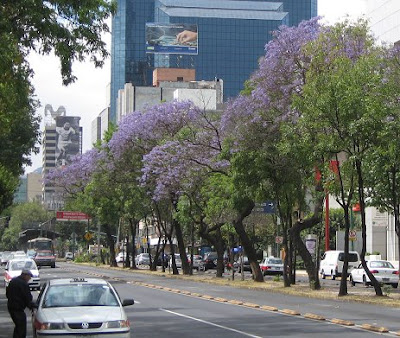 A quick note on what a shitty work do some of the international press does when reporting on LatAm. In previous post I described a little bit the Santo Domingo meeting of the Rio group where Correa and Chavez had to swallow their earlier threats and accept to tone down their words against Uribe.

But lo' and behold, the French nightly news says that Chavez was the big victor because he showed a mediator skill!. What? A mediator the guy who expelled Colombian embassy personnel, the guy who closed the border, the guy who sent 10 divisions even if the dispute was not with him, the guy who has copiously insulted Uribe for now three months? Please...... Where have the French been?

But one of the papers of the country I am at now had a very interesting comment: the Rio group is different from OAS in that it is kind of a family gathering. All is in Spanish as the only non Spanish speaking country is Brazil, which manages enough Spanish anyway, and where in addition Lula did not show up which means that Amorim, the foreign minister did not even speak. So, free form the diplomatic inhibitions that the anglo saxons countries of the continent bring, the squabbling was bright, loud and ended up as a family dispute ends: we all hug again and pretend that nothing happened.

That is why we all in LatAm now that Uribe scored big and why some naive souls elsewhere (not in Spain) misinterpreted the dramatic fallback of Chavez as a conciliatory speech. They just do not get our cultural quirks.

In the case of the French it is even more irritating because the French historically have been particularly off the mark when LatAm is concerned, probably much more tone deaf than the US on that respect. Apparently they have not learned anything since the French sponsored Mexican empire. The French love the romance of bearded guerillero more than any one else and France was perhaps the last country of Europe who finally ditched Castro. Curiously the French left was not as seduced by Chavez but the right is still seeing things in Chavez that no one else sees. But this is probably due to the Ingrid Betancourt affair since she was well "connected" to the French right. So perhaps in addition to real sloppy journalism, with obviously lots of home work to do, we might also see a lingering projection on the Ingrid worry, hoping that any "renewal" of Chavez image can only speed up the release of Ingrid, a release that was made considerably more difficult when the French transformed Ingrid in THE hostage, the one that mattered (at least for them).

In fact what the French do not realize is that the recent humiliation of Chavez might be the best thing that has happened to the cause of Ingrid. Now, that is the last card the FARC has left to improve their image. AS the computers keep revealing their secrets (and they are just starting to read the hard drive of the Ivan Rios one), the FARC image can only get worse. They thus have only one option to retake the initiative: to release Ingrid ASAP. That is, if someone is left alive that can order such a release....