What if Obama were a Venezuelan citizen...

...he would be "inhabilitado" by Clodosvaldo Russian. 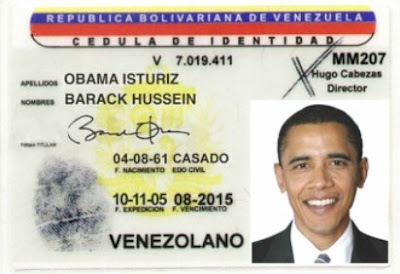 Since I woke up irreverent, I found this spoof at El Chiguire Bipolar, who is getting better as weeks go by. They just came up with the ID card Obama would have if he were a Venezuelan citizen. For the US readers this is exactly how a Venezuelan ID card looks today, including the jotted cross that makes it official. I kid you not, mine also is signed by no one but a cross and yet it is the document that serves me for ANY official transaction in Venezuela. 10 years of revolution and our public servants are still illiterate, or at least unable to find a way to stamp some sort of signature. No wonder FARC guerrillas and other subversive groups roam free through Venezuela with fake IDs!.

And if you do not understand the joke: if Obama were a threat in a Venezuelan election for chavismo, the state comptroller could simply ban him from running. That is, if it were the US, the GOP could ban Obama from running through the Attorney General office or equivalent just because Obama did not spend finds for Project Vote as intended. That is, if he decided to pay bill B with funds allocated for bill A because of some external imposed urgency, and with the agreement of the board, he could be barred from running for public office EVEN THOUGH not a penny of Project Vote went to his pockets. This is almost the reason Leopoldo Lopez is barred from running today, just in case you do not believe it, even as Chavez shifts budget assignments at will without a single word from Clodosvaldo Russian.

All based, of course, ID cards that have no one official signing them for validity.