I am boycotting the Beijing Olympics

I have been in a depressed funk these past few days. I am still in awe at how the Chinese managed to hold their Olympics while repressing Tibetans and other assorted minorities (Uighurs anyone?). Nothing mattered in the end, the worker's exploitation, the pollution over Beijing which of course drifts over the rest of the world over time, the ugly people resettled, the people being killed whenever they look at a Chinese official in a weird way, the censorship on Internet, the regular confiscations of foreign reporters material, etc, etc...

Nothing mattered, the Olympic committee caved in, nobody had to resign, and apparently a Spanish female biker doping herself was much more of a scandal than people beaten up in Beijing streets.

Nothing mattered. After initial posturing, Bush and Sarkozy eventually showed up for the inauguration. In fact, we could almost sense relief when Russia banged on Georgia, as an excuse not to talk about China nth violation of Human Rights, a China probably delighted by the Georgia affair as it can crank up at notch its repressive machine right now as you read this.

Nothing mattered. The Dalai Lama tried to be conciliatory, tried to cool down the mood in Tibet, probably sensing that the arrogant Chinese will massacre folks even more if their Olympics were questioned. For all recompense of his moderation he was received through the back door at the French Senate, and was allowed to carry his recent bad news about Tibet in an office, not even in some meeting room. No French official received him while Sarkozy was playing state man somewhere over the Caucasus.

Nothing mattered. Count Jacques Rogge, IOC head, was seen in Beijing at a cocktail party speaking in French and stressing the importance of retaining French as the major Olympic game. The French folks attending loved it and that was the end of French complaints about Chinese actions. Maybe French language gained something at Beijing, but French prestige went down yet another notch. Then again Rogge did not care, he speaks 5 languages and he had no problem in accommodating NBC financial pressure. As a Belgian he has learned long ago the art of sucking to pass between cracks.

Of course I could not announce my boycott before the start of the game because it is unfair to blame the athletes for the shenanigans and the love for money of the IOC. Money talks, we just did not know that it talked so loud, even in Yuan.

I have been punishing myself. I wanted to watch the inauguration ceremony, but I could not bring myself to do it. I never miss the swimming contests, my favorites. And I am missing ALL of them. I know what time they are on TV but I just cannot bring myself to watch them. I know, it is stupid, I am only punishing myself, but I cannot help it. How could I watch Phelps team trashing the French relay team and not watch the bombing over Georgia? Thus I watch neither and limit myself to some summaries on Yahoo Sports or the TV news who mercifully only highlight the rather poor performance of Venezuelan athletes and teams, probably cursed from accepting a Chavez send off and the benefit he tries to get form their work. A Chavez who by the way had his foreign minster send some support messages to Putin against this imperialist Georgians.... this form people who have no f*****g idea of where the Caucasus is and whatever happened there. Putin can kill and main Chechens or Georgians, he is a chavista hero. How sick it can get?

I am truly pissed, at the provocation of Saakashvili that should have known better to how brutal and disproportionate was the Russian reaction and how meek was the West response at first. Summer vacation, Olympics, Obama versus McCain, who cares. Certainly not the IOC who could have kicked out of the Olympics the Russian and the Georgian teams.

But I am left with a small but big consolation: Phelps is the hero of the games and there is nothing the Chinese can do to take it away from him, no matter Chinese theater illusions they might come up with. 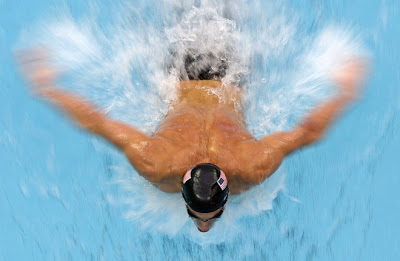 I am sorry Mike, I would have loved to accompany you through your feat, one I was looking forward to watch. But it was not meant to be, maybe on some video someday. Still, this last picture of you when you arrived in Beijing will be for me the best one of the whole games, how you brightened up the silly red. Thank you for giving us the hero we waited for since Mark Spitz. 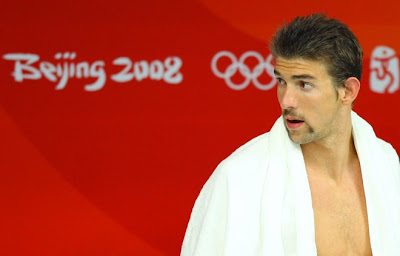