This week will see the completion of candidate nominations. Thus it is time to make my second chart of predictions where I try to take into account the effect of the divisive internal fights in each camp. Unfortunately for us, polls are not published as they are the internal weapons of argument and we only get here and there snippets that we may or may not believe. For example according to chavismo this one will win everything except perhaps Margarita Island, but they will fight for it ‘til the end. I mean, even the Baruta candidate who would achieve a brilliant success if he were to cross the 15% mark speaks confidently that he will finally make an administration for all Barutans. It would be funny if it were not so sad a representation of the growing disconnection between Chavez and the country.

The table below is made at the best of my knowledge and thus should be considered with caution. Better predictions could come as early as late September. I will discuss the different situations as they are listed in the table that you might want to right click into a new window to follow better. I am focusing only on states right now as the town hall situation is still confused enough that there is no point wasting your time in analysis that could be invalidated within a couple of weeks. 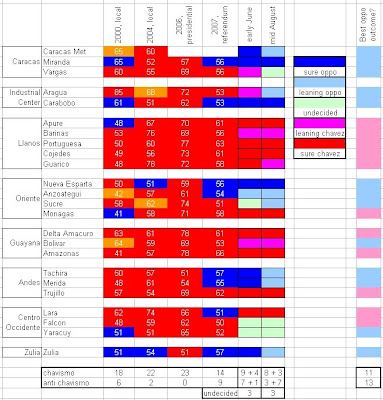 Caracas. Miranda made its unity behind a dynamic candidate, Capriles Radonsky, even though the natural one should have been Mendoza, but he is bared. The candidate of chavismo, sitting governor Diosdado Cabello, has such a bad record that he claims now that he could not do anything in his first term but that now, yes, he can. Unfortunately for him under his watch Miranda crime has beaten all records while the general infrastructure is collapsing all around as the Barrio Adentro modules keep closing. The only question left here is how well will Mendoza and Capriles merge to campaign hard in Caracas so as to ensure the Caracas Metropolitan district and Miranda State.

Vargas which was supposed to be a sure thing for chavismo is now a toss up: Garcia Carneiro is a lousy candidate that can only buy an election whereas the opposition has united behind a reinvigorated Rodolfo Smith.

The real problem for the opposition is the Mayor at Large office now that Leopoldo Lopez is out of the running. Chavismo files Aristobulo Isturiz, one of the very few credible candidates that it has whereas the opposition now is in a scramble to find a unity candidate since Leopoldo rather irresponsibly never wanted to discuss a "plan B". Spoilers such as Fermin are trying to sneak in whereas the opposition still discusses whereas to launch a big name. Considering that Baruta, Chacao AND Sucre are likely to vote massively against chavismo, Metropolitan Caracas should still go oppo, but for the time being I prefer to downgrade it to "leaning" instead of “sure thing”. I will wait for a special post on Caracas alone to discuss this further.

Industrial Center. Good news for the opposition there. Carabobo is consolidating behind ex governor Salas Feo while chavismo unity collapsed when Acosta Carles decided to run anyway while Mario Silva infamous bid seems to be floundering badly, and not surprisingly. Unfortunately at the level of mayors the unity does not work out as well and it is too early to see how this will affect the margin of victory for Salas Feo. In Aragua the primary worked out fine and even though Aragua is arguably the most pro Chavez state, the political machinery of Didalco Bolivar is strong enough to resist the challenge of chavismo who is not filing a very good candidate there, Isea, a lackluster uncharismatic, wooden, ex military, ex finance minister. Thus I put now Aragua as leaning to the oppo.

Llanos. Not much change there. I leave Portuguesa in the pro Chavez camp in spite of a divided chavismo ticket because the opposition has no heavy weight there and because I suspect that chavismo will resolve its candidature later. The PPT candidate should send the PSUV candidate packing real soon as she is a true local. The only change really is Guarico where the candidature of Lara is not credible and where Manuitt is running by proxi. Still, in the end chavismo should prevail but now Guarico with Barinas have become the only possible picks for the opposition, assuming an excellent campaign and a continuing chavista division.

Oriente. The opposition keeps steady progress there. In Sucre the machinery or Ramon Martinez will operate as the one of Didalco Bolivar in Aragua and an early unity behind an "independent" could bring Sucre for the opposition. Anzoategui finally achieved its unity behind the PJ nominee once the AD one was barred from running. If campaign unity is finally achieved, not a sure thing as AD is bitter to have lost one of its top candidates, Anzoategui could go from leaning to a sure thing. No change in the other states as the chavista division in Monagas does not seem to prosper.

Guayana. No change there. The division between the opposition ranks maintain the weak chances of the sitting chavista governor of Bolivar whose administration was catastrophic. But a late unification within the opposition could quickly change the result in November.

Andes. In that region the opposition has weakened due to its inability to reach unity in either Merida or Tachira. The last minute agreement in Merida is probably not enough since the beneficiary, William Davila, is a worn out figure from the past and some one chavismo can attack easily with a "no volveran". In Tachira, well, it is a mess now that the front runner was barred form running. Thus both states are now downgraded to leaning just because there is a real dissatisfaction with chavismo there, not because of any brilliant opposition strategy.

Centro Occidente. No change there. The chavismo candidate is strong in Lara. Yaracuy is divided in both camps so all is possible and Falcon I have no idea what is going on there, I admit.

Zulia. The heavy handed ways of Rosales, the dissident run of Saadi Bijani and the heavy Chavez support for Di Martino makes me downgrade Zulia to a leaning for instead of a sure thing. I still think that after a few weeks of campaign Bijani will drop out and Zulia should return to “sure thing” status.

Conclusion. The opposition went down in three months form 7 sure states to 3 sure, due to the barring from running to some of its most prominent candidates and the squabbles for unity. However now there are 7 states leaning opposition which gives an overall improvement of 8 to 10 “sure/leaning”. Chavismo did not lose as much "sure states": from 9 to 8, but the problem for chavismo is that it is more difficult for it to recoup any lost ground due to its generally weak candidates and its growing internal divisions which will promote significant abstention. Chavez is relying much more on the 26 decree laws, the purchase of Banco Venezuela and other effectist measures, but it is still unclear if these will by November favor him or hurt him. If inflation does not fall below 1% in October it might have been all for naught.

I have indulged in an extra "pastel" column for a more dreamy result, I suppose. That column represents now the best possible scenario for the opposition. There are 13 pale blue states. But again I must remind folk that reaching such a result requires a lot of sacrifice and organization for the opposition, namely: unity of candidatures everywhere, manning the poll stations on election day, ALL poll stations, a campaign that combines adroitly pothole fixing to attract enough chavista votes but also addressing national issues to make sure the opposition base gets motivated to vote.