"only" 22% of the drug traffic goes through Venezuela?

In what has to be another great moment in sycophantic mediocrity, VEA, the official 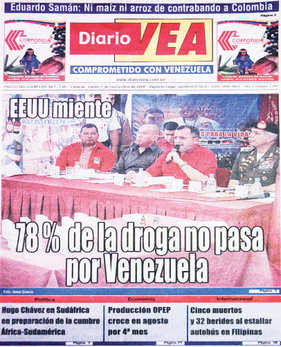 newspaper of the Chavez regime, had published this front page.

Yes, that is right, VEA says that 78% of the drugs shipped DO NOT go through Venezuela. Does that mean that 22% of the world shipments indeed do go through Venezuela? Or are we talking about local shipments? Of what drugs? Is this good enough a result to write home about?

Truly, in their desperate quest to ingratiate themselves with the government the low life sycophants of Chavez some times do real dodoos... (hat tip Tal Cual, "por mi madre")

By the way observe now the general paraphernalia that accompanies any public official event as the vice president and top brass must sit behind a red cloth covered table, red shirts and all. Only the army and those coming from it seem to escape that now dreary red. I suggest that they start drinking rosé wine instead of water, it would be a better color match and at the same time it will probably help along uttering the inanities now routine at such events.