I must admit that the horrendous Gaza events (including the rocket launches to Israel territory, let's not forget that) bring me a perverse satisfaction: they offer a chance to Chavez and chavistas to display their antisemitism. Including tacky wearing of Palestinian "foulards" on TV. But of course Chavez might have expelled the Israeli ambassador to Venezuela but not a drop of oil is cut from the deliveries to Israel main backer, the Evil U.S. of A. Empire. So, as it is always the case, antisemitism and hypocrisy go hand in hand.

This blogger was one of the first solitary voices to denounce that chavista antisemitism, so linked to mediocre people only too willing to blame others for their own failures. But this has changed as everywhere more people point out that the bolivarian farce suspiciously looks like fascism of the XXI century. We read it in the pen of Ibsen Martinez today in Tal Cual or from my friend Gene Zitver at Harry's place. The cat is out, and if major newspapers are not harping on that issue as they should, it just a matter of time as Chavez will deliver the final nail for his antisemitic coffin. Not to mention that if chavismo is unable to understand words like genocide and holocaust as they casually toss them around, probably to demean them deliberately, major papers do understand the symbols behind these words and will get on Chavez case sooner rather than later.

To conclude this post the Weil cartoon for today is priceless as it illustrates well how an ignorant and frivolous Chavez is stocking the fires on the Middle East situation instead of trying to find constructive ways to heal the drama. His obsession to make the news will bring him to any extreme, as he is probaly upset that the Gaza news upstage him, even in Venezuela. 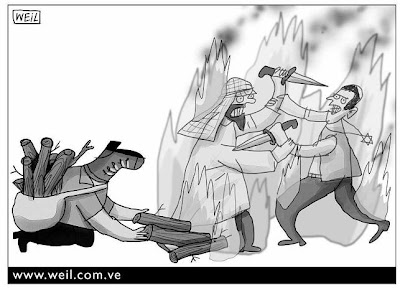