I know, I know, I should be writing about more important things such as the latest land seizures, the harbors wars, Stanford fraud, a Russian bomber base in Venezuela and what not, but I prefer to discuss the latest ridicule because it is, in my opinion, the most important event of this week: baseball Venezuelan star Magglio Ordoñez was booed at the Baseball world cup in Miami by a crowd consisting mostly of Venezuelans. Today Chavez started his Alo Presidente lambasting Miami Venezuelans inexcusably rooting for the enemy. Inasmuch as what happened

in Miami is distasteful, there is only one person to blame here and it is Chavez. Not the fans, not Magglio: Chavez and Chavez alone from having created the climate of hate that is leading us inexorably to a violent exit.

True, politics should never be mixed with sports and you should always root for your home team when this one is playing. Or at least stay quiet. But what happened in Miami is much, much more than just a disgruntled anti Chavez fan base.

First, Magglio Ordoñez made an add in favor of the SI in the February 15 referendum. He did not need to do that, and he should have stayed away from it. It is not the same thing to say in an interview that you support Chavez, just between the question about your family and the one about your latest training methods. It is another thing when you actually make a specific pitch for the man.

True, athletes deserve to have a political opinion, but if they pretend to represent all of their country they should abstain to make political statements, or if they must allude to their preferences do so in a casual way at most. Pushing this line of argument, I could go as far as seeing Magglio in a large group of people featuring their support for Chavez in 2006, but not for the type of election that we held last February where the message proposed was that a group in the country was trying to find ways to impose Chavez forever to the other group. Taking position in such a highly polarized context can only bring you trouble, no matter which side wins.

This being said, we must agree that Magglio has no excuse. When he states that he is allowed to express himself and that he is not hurting anyone, he is either a fool whose dozens of millions earned in the MLB have cut him from the Venezuelan reality, or he is a liar. Perhaps another type of athlete, one from those sports that never get much financial support, could be excused from publicly supporting Chavez. After all, how much money can ever do a TaeKwonDo player compared to the millions already made by Magglio and those he still shall pocket? When you are the image of a major MLB star in the US you owe it to all Venezuelans to be discrete on politics as all the other MLB stars, even bigger than Magglio, do. Magglio is simply an interested idiot.

But he is also a victim because he has left himself get trapped into Chavez Machiavellian world. And he is a dangerous victim too because he forced the team to get out fast to his defense least they lose the tournament after a fit of demoralization or least Chavez exacts revenge on them at home from something that they could not help. Not all of them have the comfortable millions in the bank that allow Magglio to be an airhead.

When Chavez complains about the Miami exiles (and many Venezuelans who flew in for the occasion) playing politics with Magglio he should be ashamed because he is the one who introduced politics to Venezuelan sports. Or has he forgotten all the photo op he sought for the Beijing Olympics? Or has he forgotten how he used to America Soccer cup to promote himself? Anything that Chavez touches becomes corrupt and those that allow Chavez to reach them become corrupted too in a XXI century Faustian bargain. As such Magglio can almost be pitied as a a victim. But he still remains and idiot and probably an interested liar.

Chavez is the biggest hypocrite, and his followers along. After all, did they not try to give hell to Alejandro Sanz when he tried to come to Venezuela for a concert a while back. Now for all practical purposes he is not allowed in the country (as many writers, journalists and the like, by the way, including Lech Walesa). Why those crocodile tears about Magglio being booed in Miami? Because it risks to impair the chances of Venezuela to win the title and thus deprive Chavez of another ego bloated moment?

"I voted for Chavez and all I got was this divided country" is the kind of t-shirts they could start making. Of all my Venezuelan sports memories I cannot recall a situation like the Magglio one yesterday. This is the only true achievement of Chavez in ten years, to divide us into a 54 and a 46% blocks that are about ready to kill each other, or at least throw empty bottles at each other. Socialism my ass, plain fascism is what this is. Because let's not forget that if Chavez inner fascist is plainly revealing itself these days, it also feeds on the other side becoming fascist and acting on it as they did in Miami. The honorable way out of this is for Magglio to swallow his pride and make a communique where he repeats that he is pro Chavez but admits that it was a error from his part to act on it, and apologizes for it. But then again he probably knows what Chavez would do to him if he were to atone.

This Miami moment is so illustrative of our predicament that the mind reels.

To close this I must also address something rather unpleasant: why are there so many Venezuelans in Miami? Why has this group increased so much under Chavez? True, they might have been contaminated with some of the extremism of some of the Cuban exile, but still, that does not detract from the reasons they went to Miami: political prosecution, financial problems, lack of opportunities at home, soaring crime in Venezuela, and what not... All of these things might or might not be attributed to Chavez but the aggravation of everyone of them is to be laid 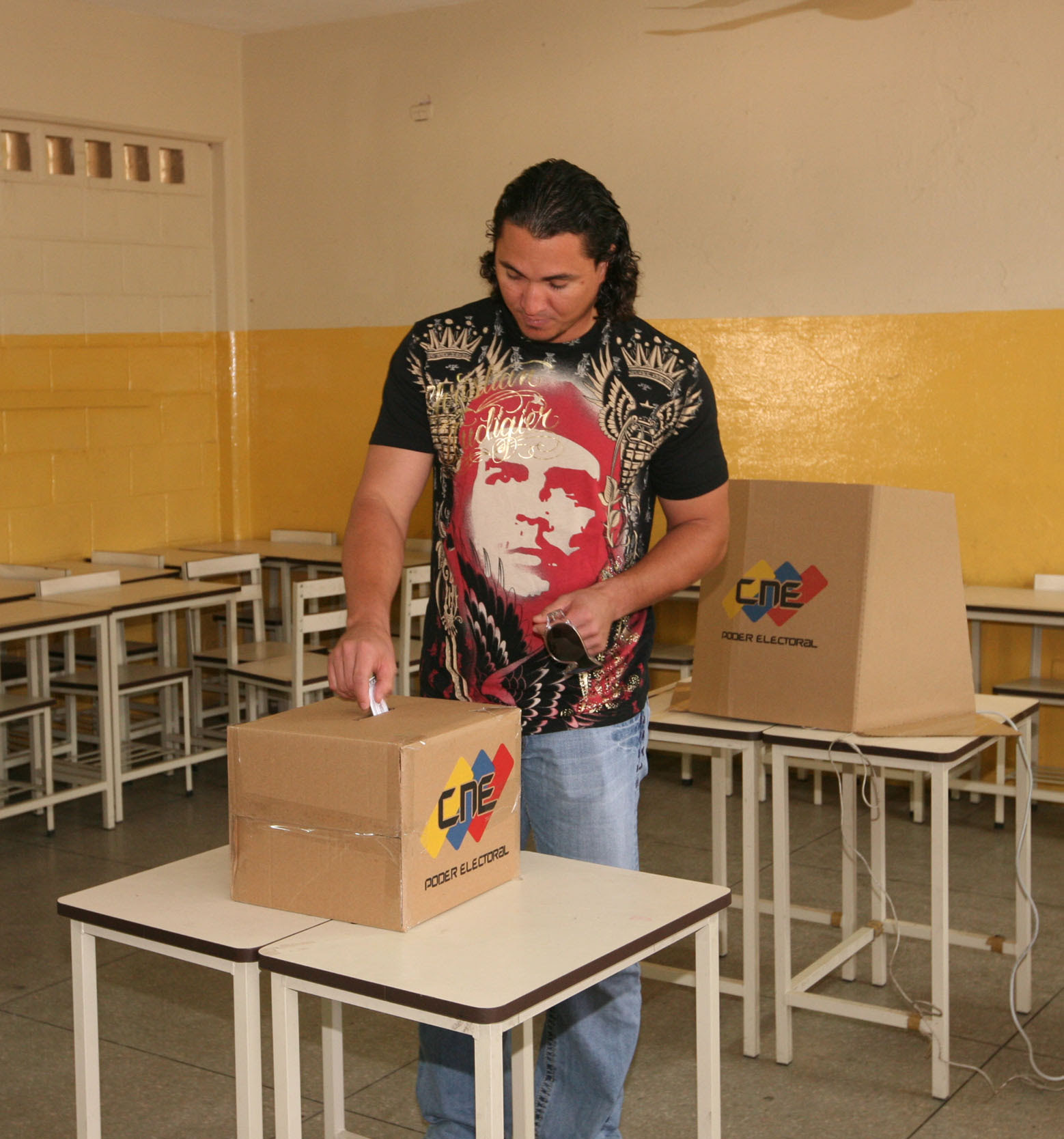 without a doubt at the feet of Chavez. But then again, like Castro had, he also wants his radical Miami exile.

Update: in a moment of idleness I looked for more info on Magglio Ordoñez. Quickly I found clear evidence that 1) he is an ignorant idiot and 2) that he probably is doing "business" with the revolution (namely the gang in Anzoategui; maybe he wants to become governor when he retires of MLB?). This picture at voting time says it all, lamé and rhinestone mass murderer included. Yet another great moment in bad taste.