Tal Cual's Weil has a killer cartoon today. Related to another cartoon that I posted a few weeks ago. 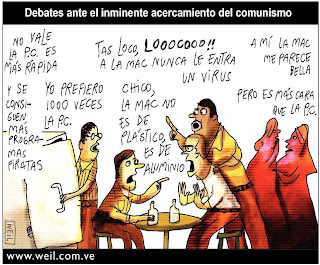 In this cartoon folks are debating the merits of PC versus Mac, in superficial terms (It is more beautiful! But it is more expensive!). No need to translate it as you all have been subjected to such ridiculous "debates". The thing is that around my daily life I hear a lot of such stupid avoidance of reality, and as such the Weil title "Debates as communism is becoming imminent" hits a chord with me.

At least in Yaracuy you would be hard pressed to find someone with a political opinion, and even less with the will to do something about it. At times I delude myself at being the lone opposition as local rags write on silly subjects such as "bolivarian councilmen to form an association". Truly? What for?. Of course if you scratch a little bit you will find that some of the workers I direct seem to be much, much less chavista than they used to be. But a worrying passivity has submerged the state as Julio Leon, our new governor starts timidly to put up his name on more billboards. The surprise is that with a slashed opposition he does not appear more prominently, I suppose a good point to grant him. Or maybe he is just too focused on a national career and is already plotting his next move.

We are harvesting in Yaracuy the results of the opposition debacle in November. Lapi and his movement are nowhere to be seen and for all practical purposes they seem to be both exiled in Peru. Capdevielle and Primero Justicia who sponsored his mortal candidature have left the state, abandoning us to our fate after having sunk us. UNT has too many problems where it already thrives to seek new grounds here.

Outside of Caracas and Zulia I do detect a general resignation. Still, you would be even harder pressed to find elation at the communist coming except for the paid professionals that "grace" any chavista rally as he takes over this or that. Right now, that is the only positive element, along Ledezma toughness, that I can report. However something is simmering.... you know, like the cliché "calm before the storm".