Totalitarian regimes follow similar patterns. They differ considerably among themselves because they have that unique ability to adapt to the conditions of their time so as to be acceptable at first by their subjects and by their neighbors. But all have the same objective, to establish the domination of a small elite, a domination that in theory is irreversible. And that is why eventually they all follow a similar pattern, spread on different time scale, different cultural objectives, different successes in imposing their vision, but all show similar mechanisms, and all are very "legal".

For all its tropical messiness and its delusion that oil money could buy the happy consent of the people for Chavez eternal rule, chavismo is little different at heart than past totalitarian regimes. Since late last year we have become quite aware of the parallelism that can be established with nothing less than Nazi Germany, even if chavismo "inspiration" might come form the CastroCuban horror. I suppose that extremes have a way to meet.

We had a few choice pieces, from the disrespect of the November regional election result creating the first Gauleiter position in the regime, to all sorts of laws and decrees and constitutional violations. Political opponents have been disposed off in increasing numbers, either through exile or speedy jailing without trial. Private property is now a myth. Freedom of expression and of information are being acted upon at a speedy rate. New electoral and education laws have been passed to make sure that indoctrination helps new elections become safe bets for the regime.

But something was missing, a general sense of purpose as all of these measures tended to appear more like nervous responses to the moment rather than a well coordinated strategy. True, we never doubted that there was a final objective, clearly illustrated in the February 15 referendum of this year which officially allowed Chavez to become president for life. What I mean here is that until recently it all seemed to be rather a two step forward and one back, or one on the side even. A little bit as if the government still believed that neo-totalitarianism could be willingly accepted. Now this is all over. 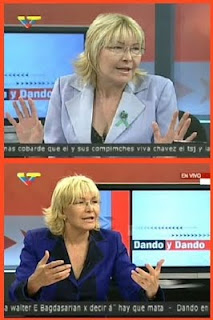 Luisa Ortega Diaz, the general prosecutor of the republic seems to be the one in charge of putting it all together, or at the very least making sure that the government will have from now on a free rein to do all the necessary misdeeds to retain power.

Luisa Ortega started one month ago by offering a law against "media crimes" which simply would have allowed easy prosecution of any journalists, media owner and by extension even a blogger like yours truly. The uproar was so much, the surprise to many chavistas too hard to take that the Nazional Assembly even pretended for a while that no proposal of such a law had been received even though we all saw it on TV. So, right now the law is not being discussed but it is there, ready to be discussed when the time is right.

One would have thought that after such a fiasco Luisa Morales would have at the very least offered her resignation since she was acting under Chavez orders. But no. We learned this week why, because she is in all likelihood the one organizing our own tropical Gleichschaltung, the German term that describes how the Nazi set up quickly their totalitarian state as of 1933. This week she announced that public protest could be well criminalized using the current legal code because it could be easily assimilated to rebellion and thus protesters could be subjected to a decade or more in jail. Her words had an impact outside, reported in English by AP and AFP or worse by El Pais in a piece that cannot hide its consternation. And other such as BBC mundo who givse the subject a major report.

The impact at home I need not to illustrate it, you can guess, as it is aggravated by Luisa Ortega persisting in her mission, as she adds that those who oppose the new education law can also be considered criminals. In fact with today decision to jail at Yare Richard Blanco we can say that Kangaroo courts have been activated; our own version of Volksgerichtshof cannot be far behind as we know that for sure many "judges" inside chavismo will have no problem becoming our very own Roland Freisler to preside these "tribunales del pueblo" or some other appropriate name.

Right now we must be impressed that the rare chavista arrested for public violence have already either been released or rest in safe jails where their lot is relatively comfortable. Opposition folks are jailed in the worst jails of the regime. And the way things are going soon Luisa Ortega will have to organize concentration baseball stadiums to hold all the people that are protesting because they are not paid, because the hospitals do not work, because crime is unbearable, because, because, because...

That such measures reflect the nervousness of a regime feeling its popular demise is not a consolation, tremendous hurt will be done along the way. We must not forget that Luisa Ortega Diaz has tremendous power already to do evil: she has the monopoly of prosecution, she has basically the monopoly of deciding what is the evidence suitable for prosecution, she can influence what courts will oversee what cases, and of course what prosecutors to use for political cases. In addition it is very difficult to bring her to account for her acts, and even less with the Nazional Assembly we have today and the corrupt and sold out High Courts of the country who are supposed to be the ones balancing the power of the prosecutors offices. Her power is so big already and the control over her so inexistent that she does not need to make new laws to establish political courts, just laws to "create" the crimes she needs to prosecute to silence opinion.

The fact of the matter is that people like Luisa Ortega are showing how they have transformed themselves from leftist activists into true fascist, like it happened to so many Germans who joined the Nazi party, such as Freisler, the head of all these political courts in charge of disposing of dissent fast. As such I have decided to create this special medal to be awarded as sparingly as possible to chavista officials that have completed their transit from the left to fascism. It is a suitably red swastika, to reflect the color of chavismo.

The medal of dishonor of chavifascismo.
To its first recipient, Luisa Ortega Diaz,
who even has an aryan bleached blond disposition.

Note: the set of pictures of Luisa Ortega I present show her TWICE at the political program of the state TV, "Dando y Dando". It is simply inconceivable that the head of the prosecuting office attends so often such shows when as far as I can tell she has never attended Globovision, and probably not even Televen, the only network where she could be mildly questioned as all the other ones, including Venevision, are pro Chavez. Not that she should attend them either: if she had conscience of her immense responsibility she would receive only at her office, and all political persuasions.