Letter from Montevideo: What’s at stake this Sunday…

Montevideo – 23/10/09 - It’s Friday night and meteorology announces a red alert. As I write this, it rains hard and the wind blows heavily; I see thunder and lighting in the horizon. Somehow, it’s a perfect setting or symbolism for what we have been living these past months: a red alert, blackness and thunder, lots of thunder; lots of fireworks too, and no substance.

This Sunday Uruguay will vote for President, Vice-President, the General Assembly (30 senators and 99 National Representatives) and members of the 19 Electoral Juntas (one for each department) composed of 5 members each. Two plebiscites will also be voted: one to allow Uruguayan citizens abroad to vote by mail and another to annul the Amnesty Law to the Human Rights violators – the Armed Forces that perpetuated the Dictatorship in Uruguay from 1972 to 1985. Voting in Uruguay is compulsory.

There are five Presidential candidates and two favorites: José “Pepe” Mujica, the 74-year-old Senator from the Broad Front and fielded by the party in power, a Tupamaro guerilla in the 60’s. 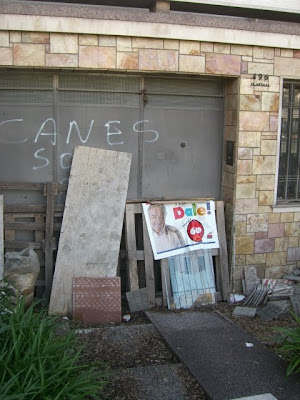 The second favorite is Luis Alberto Lacalle of the Nationalistic White Party who was President of Uruguay from 1990-1995. Both candidates emerged from the internal elections carried out in June, when the people elected their favorite within each political party. In both cases, the extremes won. The moderate candidates, Danilo Astori, Minister of Economy of the present government and Jorge Larrañaga lost their chance in that election. Both are the vice-presidential candidates of Mujica and Lacalle respectively.

“Everyone thought then, that the clash between those two strong personalities, with sharp political profiles, experienced, and with a clear vision of the country they wanted was going to be a tough and controversial process”, writes Tomas Linn in this week’s Búsqueda, a prestigious Uruguayan weekly newspaper. “However, it was not so”, he goes on. “The two candidates committed errors, had setbacks and deliberately blurred those visions. Mujica’s errors were bigger and more important. But Lacalle paid a higher price. And that can be explained: Mujica’s electorate tried to excuse his stumbles, while Lacalle’s could not conceal their distaste. This shows how different both electorates are”.

Those that do not belong to the undivided division that the Broad Front represents, don’t quite understand how the latest opinion polls do not reflect a downslide of Mujica’s numbers. A month ago the country was shocked with two “pieces” by this candidate. An interview with the Argentinean newspaper La Nación in which he declares “to be against government intervention in the economy, argues that ‘justice is vengeance’ and what matters are the human rights of the living, praises Brazil’s Lula da Silva negotiating skills, admits not understanding the political ideology of the Kirchner couple, loathes bureaucracy and apologizes for having condemned Uruguay to live under a military dictatorship” (a summary of sorts here).

The irony is that among the Uruguayan youth, the Tupamaros have created the myth that they fought against a dictatorship, not a government elected democratically. He says in Argentina that he is against government intervention in the economy, but here he says that he wants the workers to manage the factories, but not to become Capitalists”. He also says that the State should own all land, but denies having said it the next time. And last but not least, he wants a Constitutional Assembly for has never explained why and what for.

The second gaffe was a book called “Pepe Colloquies” published by Alfredo Garcia, Editor of a weekly newspaper called “Voices” (used to be called Voices of the Front, but shortened about a year ago). Garcia describes how for four months, every Monday morning for two hours, they chatted – seated on upside-down yellow buckets, in the candidates farm in the outskirts of Montevideo, about the future of Uruguay and his utopian dreams. “It was so difficult to systematize the turmoil of ideas and thoughts that poured from Mujica”, wrote Garcia, “that I gave up and decided to publish the conversations we had literally”. Among other things, he states that “The Kirchners are lefties, but what a left, mamma mia, what a gang!” and Argentina is a country “of hysteric, mad, paranoiac reactions”. In this book he criticizes God, the devil and President Vázquez himself, which brought an immediate reaction: “He talks pontifically and says a lot of stupidities”. 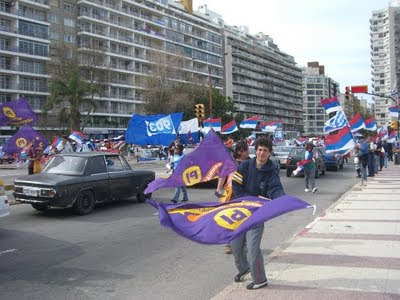 [Three parties together in the same Montevideo 'rambla costanera',
amiably campaigning for their man. Such a scene,
familiar in Venezuela until the 90ies,
is absolutely unthinkable today! ]
It took more than a month for Vázquez to accept taking a picture with the candidate of his party and says he will vote for him for disciplinary reasons. Mujica’s campaign team has ordered him to literally shut up, and he canceled several interviews with local political shows that he had previously agreed to. The undecided have grown, according to pollsters, and are a record number. Mujica called them “morons” and that if they were afraid of voting for him, they should throw their votes to the sea or issue a blank vote. With all that, polls still say he will be the probable next president of Uruguay. I don’t believe the polls, but that may be wishful thinking.

The country is divided in two halves. Which side will win on Sunday is still a mystery. There are several open options. 1) Mujica wins 50% + 1 of the votes with a Congress majority tomorrow; 2) the Broad Front wins the majority in Congress but there’s a run-off or ballotage with Lacalle and he wins the presidency in November; 3) neither party has a majority in Congress and Lacalle wins in a ballotage.

The Colorado Party, who had 9% of the votes in the past election, a “punishment” vote to Jorge Battle of this party who governed from 2000-2005, is the third runner up and is now presenting according to polls a 13-15% vote intent. Pedro Bordaberry, son of the man responsible for the Uruguayan coup d’état, has made a 2.0 modern-looking campaign and is still dreaming of having a surprise win over Lacalle, thus being the rival of Mujica in the ballotage. No way will this happen, but it may be one of the reasons for the #3 above to take place. 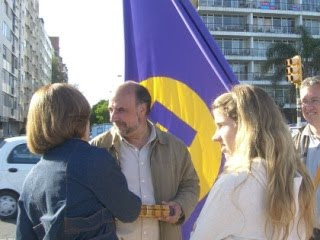 The fourth party is the social democratic Independent Party led by lawyer and sociologist Pablo Mieres. The party has only one Representative in Congress, vice presidential candidate Iván Posada. Their aim is to elect Mieres to the Senate and increase their number in the House of Representatives to 4 or 5. In the last polls they have a steady and increasing number of supporters that went from 2 to 4% and may also surprise tomorrow. [On the right Mieres, who I suppose is the choice of our guest blogger]

The fifth candidate is Raul Rodriguez of the newly created Popular Assembly, a scission of the Broad Front, who believes the later have betrayed the leftist ideals. They want to impose Cuba’s and Venezuela’s socialism in Uruguay. They may elect one member of Congress.

As to the Plebiscites, pollsters say that neither will obtain the necessary votes (50%) but this is also a mystery and another long story.

The dish is served. The dice have been thrown. In this election there are many things in play: the rule of law, democratic values and styles of coexistence in a society that has changed, and not for the better. Previously called the “Switzerland of the America”, the destiny of this small South American country is in the hands of a bunch of fanatics and a silent minority that hopes and prays for better days.

I’ll be supervising elections tomorrow, and the one reason I still hope, is that Uruguay has one of the most trustworthy electoral systems in the world. At least we are sure that whatever the results, it was what people really voted.

Editor's note: I understand that the author will be quite busy tomorrow during the election, due to her own political involvement. So she might not be able to reply to any question you might have until late in the day. But that should not stop you from asking anything you wish to know about that election that seems to have been financed by Venezuela. Imagine that! Chavez financing a Tupamaro!