Voluntad Popular is launched in Valencia

Blogging takes you places, even in Venezuela. I was invited, press card and all, to cover the 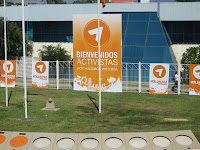 launching of Venezuela latest political party/movement, the one that Leopoldo Lopez has been working hard at this year, after he left UNT (1). The locale was the sports arena of Valencia, el Foro, and as a visual witness, the arena was filled up and brimming with energy and enthusiasm (click on pictures to enlarge).
From the start this was a smart move. For a country getting more and more tired of all decisions taken in Caracas, launching officially the movement in Valencia was smart, a nice compromise including the distancing of the Caracas crowd but still geographically sound enough to avoid major travel trouble to the supporters (2). But it goes further as Valencia was one of the 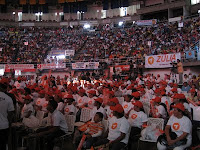 major opposition defeats of 2008 due to internal division. The defeated opposition candidate, Cocchiola, was in attendance, supporting Leopoldo and thus indicating his final break with Proyecto Venezuela. An indication that the days of Proyecto Venezuela in Carabobo State might be reaching an end? A deserved punishment for a party that refused political alliances and thus lost all but the Governorship, a useless prize when the rest of the state is against you.

But this symbolism did not stop the different speakers to stress the need for opposition unity, a little contradictory when you come to think of it, just as you are launching a new political party a few months before crucial elections. I am not going here to discuss the tenets of the movement, just stating that one of their main plank is decentralization, which is something that resonates well with me. instead I need to start by fessing up. Indeed in the recent past I criticized Lopez for starting yet another movement. But since he made his first moves I must say that he had the virtue to shake the current political class that includes a prematurely aged Primero Justicia and an UNT that seems unable to grow beyond Zulia and Rosales interests. And let's not discuss the AD and COPEI dinosaurs.... If Lopez has not made a believer of me today, he certainly went a log way in easing my apprehensions and waking up my interest, and favoring more primaries for 2010 than I as willing to accept.

The event was dynamic, in spite of the sweltering ambiance. As all Venezuelans event it started late but all through it there was an unusual organization. It all started at the door where the thousand of attendees were checked for guns and booze. Right when I went through the gate, two youngsters were trying to pass two bottles of rum hidden under their large Pepsi bottles in the cooler their were carrying in. The bottles were confiscated and the kids said nothing...

some slightly corny theatrics. But you know, politics... Thus I had plenty of time to walk around and judge the atmosphere of the meeting. Suffice to say that it was palpable that everyone really wanted to be there.

Since I had time and a press pass I could also hang around the air conditioned press room in the bowels of the Foro. There I got interested by the Twitter wars, a phenomenon that I totally ignored (3). That is, the Voluntad Popular folks had two computers dedicated to protect the #5D Twitter forum thing from hackers. I need to update, really......

People came from everywhere, except from Yaracuy from which I seem to have been the lone attendee. I learned that because I managed to sneak into the headquarters where there was a large map of Venezuela listing how many people were supposed to come from each state, how many actually left and how many made it to Valencia. The only two states without stickers were Yaracuy and Delta Amacuro (which at least has the distance excuse...) I suppose the movement is young enough and I also suppose that after the Yaracuy disaster of 2008 nobody cares anymore about us. From my raw calculation from that map they were expecting at least 3000 folks. Not all state had numbers already written on the stickers, for example Caracas of 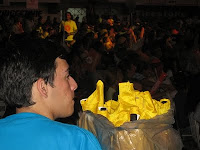 all, so they were expecting more than 3000. Whatever the numbers were, Leopoldo Lopez won his preliminary political bet of his return: he filled up the Foro, as the picture at the beginning tries to illustrate. For a meeting designed to motivate registered political activist only, it was a success. 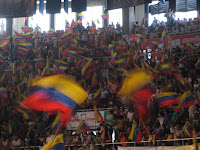 The event officially started with a corny moment of flag waiving. At each end of rows, some kid held a bag full of flags and these ones were passed on and waved all across the Foro. Corny but effective, a very Media moment, you know, just like a US political convention, from the flags to the signs for each state group. And let's face it, non chavista have a more convincing way to wave the flag...

Then the speeches started. As am amateur journalist with my little pocket camera I did tape some and two came out interesting enough for you to feel the ambiance. The first one is the one of Freddy Guevara. I was surprised to see him there at first. After all, he is the UNT elected councilman for Caracas. Naively I thought it was a courtesy visit of UNT. But I was told quickly that he is about to leave UNT and join Voluntad Popular. It does make sense: the main observation I had about the people I walked by in the press and party quarters was that all the students that I remember having seen on TV, from the one that spoke at the Nazional Assembly (crop 1) to the ones of the 2008 votes (crop 2) and even some of the crop 3, are with Lopez. The only one missing is Yon Goicochea who has tied the knot with Primero Justicia. Even UNT is losing its trophy kids!

To close this post, the speech of Leopoldo Lopez. Needless to say that he was welcomed as some kind of movie star. And as you can see from the video, his grin is not faked: the man knew he had won his preliminary bet, launching a movement. He might be the beloved leader of it in appearance, but I can tell you that today he was well accompanied by a lot of worthy people, and an even bigger lot of future leaders.


An excerpt of the early speech of Leopoldo Lopez.

Thus it was a very interesting experience and one that made me much more optimistic about the future than when I arrived in Valencia this morning. True, it is not over yet. I suspect that when the rivals of Lopez take notice of his success today, from UNT to PSUV, they are going to look for ways to counter the nascent movement. But it is not going to be easy, Lopez seems to reach across social barriers, at least better than Chavez does. 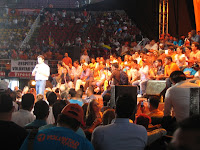 We must admire the guts of Lopez, banned from running for election for a few more years and yet willing and able to create a new movement for which he cannot run any time soon! He might be seen as yet another caudillo by some but he has the luck that he will need to share leadership from the start in a way Chavez does not need to do. I suspect that in the end this will be Lopez strength, to be forced to create a viable movement before he can use it to reach higher office. Enlarge the picture on the right and you will see that the line up behind Leopoldo Lopez on stage is of quite another quality than the line up we see behind Chavez these days.

1) For memory I will remind readers that I also was asked to cover the Primero Justicia convention of 2007, as a personal guest press of one of its directors. thus, as far as I know, I am the first Venezuelan blogger to cover two conventions :) I could also add that the convention I would not cover is the PSUV one. Not for any personal or ideological reason but because when Chavez speaks nobody can leave the room. I have no intention of putting up with a 3 hour ranting of Chavez. In Valencia I was free to leave at any time. A small but telling detail, no?

2) As it always happen in Venezuela, plenty of buses were parked in front. But contrary to the buses ferrying chavista supporters, those did not harbor any Bolivarian State logo, meaning that the militants very likely paid for their trip.

3) On line presence of the group: Facebook page of Leopoldo; his Twitter address; the Twitter for Voluntad Popular; and its web page.
Posted by Daniel at 3:44 AM