Cable TV falls to Chavez abusive cadenas: even in Discovery?

And thus the era of big brother keeps expanding its reach into Venezuelan's home. 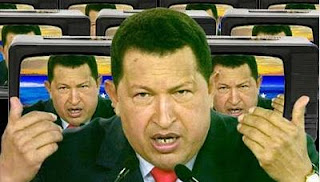 Yesterday was the last day where we were free from state intervention on cable TV, when the channel was cable only. Now, any channel that cannot prove that its production is done outside of Venezuela will have to transmit all the government propaganda AND CHAVEZ CADENAS. (1)

That is, not only RCTV had to submit its paperwork to explain where its production came from, but so did National Geographic, and the Discovery set, and Warner or Sony channels and other such venues as Arts and Entertainment and even E! network along MTV and Fashion TV.  That is, you got this right, Animal Planet has to prove to an obscure bureaucrat of CONATEL that the noted Suricate soap opera was filmed on location in the Kalahari and not in some Barinas grassland.  Well, maybe it did not go that far but it could go this far if that obscure bureaucrat were so inclined.  However one thing is certain, if Animal Planet does not bother sending the requested papers, the cableTV companies in Venezuela would be forced to erase it from their grid.  Even a delay in submission might be enough to erase a given channel forever.

This absurdity of proving that the Chavez message goes above any other one has been long in the works (despair not, as soon as chavismo realizes that the result of this new coercion improves the ratings of the Discovery network they will force it to transmit cadenas).  It all started when RCTV was closed in 2007.  When this network went on cable only it managed to trash the ratings of all the pro Chavez networks PUT TOGETHER, be they open national coverage (VTV, TVES) or cable plus partial open coverage (VIVE, ANTV, TELESUR).  That is, a single cable network was able to best all of the chavista propaganda machinery together.  See, RCTV was exempted to pass Chavez cadenas. That is, until today. Now, RCTV, the real target of this Orwellian measure, will have to transmit cadenas and when the harried Venezuelan worker comes home, s/he will not be able to escape Chavez through the solace of soap operas and silly game shows.

Fortunately they will be the soap operas of Colombian and Mexican TV, which will finish off the Venezuelan soap opera industry, or force it to move to Miami altogether.

And yet in spite of all its effort at dominating the air waves and communications through censorship, blackmail, closing "enemy" stations, propaganda, cadenas, and what not, the news circulate.  Be it through smaller harassed networks such as Globovision or RCTV, be it through the semi censored papers, be it word of mouth, be it through Internet samizdats like yours truly, we all know about crime, about water and electricity shortages, food scarcity, lack of jobs, corruption and what not.  In fact we do not need to read the news, we live it everyday.

As it is becoming a ritornello in this blog, chavismo cannot stand the idea of the TV remote control and primitively thinks that force feeding us with more cadenas, forcing E! network off Venezuela cable, will make Chavez message come through.  As if after 11 years of chavismo there was a chance that Daniel Duquenal or Juan Bimba did not know what is really going on and where just "misinformed".  The more I look at it, the more chavismo is a fundamentalist cult.

I cannot wait to see what new blow will Chavez image take when, say, National Geographic or CNN is forced off the cable grid because a CONATEL bureaucrat refused their application on some silly technicality.


1) for those who are late to this game, Chavez benefits from two obscene propaganda tools:

-- Every Venezuelan network which broadcasts on open air free signal must pas everyday a certain amount of "public services" announcements for free.  These announcements are most of the time plain propaganda.  the noraml advertisemnt revenue lost by the networks is of coruse not reimbursed nor considered at tax time as a deduction.

-- But the worst is the cadena.  A cadena is the FORCED SIMULTANEOUS broadcast on ALL TV AND ALL RADIO of whatever Chavez wants to talk about, for as long as he pleases, and as often as he pleases.  Not only there is no financial compensation for the revenue lost (which can be very large since there has been days where several cadenas took place, amounting to several hours), but there is no right of reply from the aggrieved party, not even a 5 minute reply cadena.  I use the term "aggrieved" because too many of these cadenas were used to insult opposition politicians, foreign figures, established institutions without these ones been allowed even to run a pay reply spot on the state TV, VTV.
Posted by Daniel at 1:23 AM