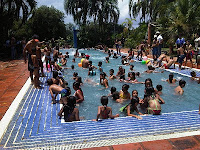 One thing is certain: the resistance of Diego Arria at being robbed blind is hurting chavismo.  For the first time really, in a long chain of state sponsored thuggery that started with emblematic farms like Hato Piñero, the government is met with effective criticism exposing bluntly the uselessness of its policies and the robbery component of the whole charade (1).  And thus the INTI guy at La Carolina circulates these pictures posted on the right of the pool at La Carolina.  He even posted a picture on how the horses at La Carolina are now used for rides for "el pueblo". 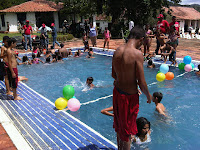 Juan Carlos Loyo, @jcloyo has opened a Twitter account which has been duly picked up by Chavez at his @chavezcandanga.  Now, let's play the game and accept the premise that indeed Chavez is the one finding enough time to manage his twitter account.  What is wrong with these pictures?


First, La Carolina was not designed for that activity of masses of people swarming in, walking into any room they want to change for the pool, or take away any souvenir they wish.  La Carolina was a country colonial style estate where Diego Arria also did some business for his diplomatic career, to entertain special guests in complicated negotiations.  Of course, a case could be made to transform La Carolina into some type of summer camp for unfavored kids, or even turn it out into a "posada" (bed and breakfast, rural inn) so anyone willing to spend for room and board could enjoy the privilege of the rich and famous.  But it has to be adapted first.  From the pictures you sense that there has been no adaptation, that this "piscinada", as we call pool days for kids in Venezuela, is there for show, for a Chavez  tweet, and that these kids might simply never come back there as the regime will use it at its discretion (assuming that they are able to provide at least adequate maintenance).

Second, there is a continuous attempt at painting Arria as a rich and famous which gets its due as his hoarded pool must now go for the people.  The message is clear, no one can have a private pool in Venezuela.  That chavismo has been unable to provide pools for "el pueblo" is not something worth discussion.  Though the Nirgua region of Yaracuy has plenty of places and water to open more than one municipal pool were the military mayor of the area to wish it so, this one has done nothing of the sort, limiting his presence to silly red placards where he wears a silly cap.  Of course, there is nothing better to hide your own incompetence at building anything than to steal what you cannot make.  Diego Arria somehow had the skill to make the money and build himself a pool and thus he must be punished.  Now Nirgua has a narrow training pool too far away from its downtown to be of any real use outside weekends splashing as no one will be able to train seriously there anyway (I know, I am a Master Swimmer, I know what a training pool should look like).

Third, which kids are those anyway?  Are they the neighborhood kids?  Are they the kids of the INTI officials that took over the joint?  Do they come from the chavistas in charge at Nirgua?  Or the local military barracks?  I am pretty sure that if you were to take your own kids to the Carolina you would be denied access, that the pool has gone from an exclusivity of Diego Arria to an exclusivity of the PSUV leaders, probably not even the local ones, reserved to the military, mayor, governor or INTI entourage.  "El pueblo"?  Gimme a break!

Thus, once again, through the clumsy chavista justification we can perceive the real truth: taking away from the rich to spread it among a small group of people who are unable to build anything on their own.  Populism at its worst!  The rest of the uncouth masses?  Have a bag of food at Mercal!

Note: Diego Arria is pursuing his Internet defense.  In addition of his active Twitter account, @Diego_Arria,  you can now go to a La Carolina blog where he puts plenty of pictures of what La Carolina was when the INTI stole it.  I cannot wait to see the same pictures in a few months form now when all will be run down, if not abandoned.  Unless of course some chavista big wig pretends to becomes the administrator as way to hide that he is the new owner.

---------------------------------------------
1) when Hato Piñero and El Charcote and such notable producing or ecological ranches were taken over by the government I did write a series of articles.  They were about the agrarian policies and realities of Venezuela (January 2005), the Hato Piñero seizure properly (January 2005), how a legal robbery system is installed in Venezuela (September 2005) and comments on a major WSJ reprot on land seizure (May 2007).  This is not a new interest of mine, it is a long time covering of the agrarian situation that explains blatantly why we are out of so many food staples in our grocery stores, why we must import more than half of our food.  All the terms I have used in the La Carolina series so far are just a repetition of all that I denounced in the past.  Cassandra Duquenal I should sign my posts: everybody knows what is going n, how deleterious it is to our economy but nobody does anything about it, pretending that the problem really does/will not affect them.

If I write so much on La Carolina  it is becasue that seizure is obscene and it involves my favorite watering hole on the road, with nice, dedicated people to serve the weary traveler. I cannot stand the savagery of the whole operation, the insult to common sense and intelligence that this masquerade is all about.
Posted by Daniel at 3:35 PM