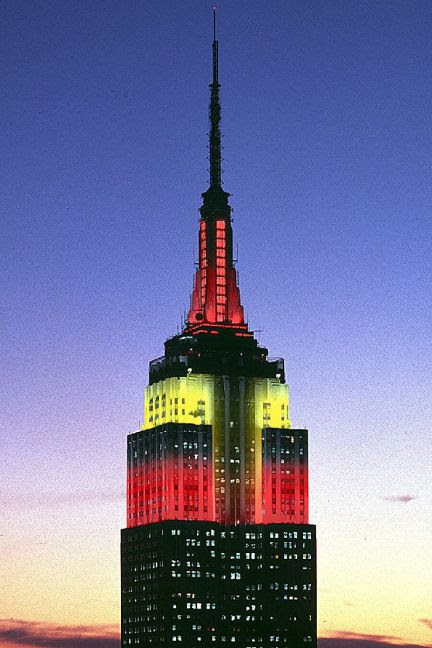 I cannot resist a last post on the World Cup, to review the image of Iker Casillas the steeled cry baby.  If in the field as a team captain he managed from the goal posts to control the nerves of his team, his emotional inner dam eventually broke down.  Not only he cried when Iniesta scored the goal that he knew the Dutch had no time to erase, but when he was interviewed by his girl friend (a Spanish reporter he met who knows in what locker room) he broke down again, kissed her and run away without finishing the interview.  You should watch his gaunt face in the video (I cannot embed it for some reason) and then you will understand the toll it takes if you want to become a World Champion.  Corny moment perhaps but oh so telling!

The other "moment" is the Empire State building sporting the colors of the Spanish Flag.  Now, this is the best evidence I can think of to prove to my still skeptic US readers that soccer IS the world sport, even now in the good ole US of A.  You are cornered, give it up!

And to finish, heck, why not let it get to me join the crowd and say it: "¡Viva España, carajo!"
Posted by Daniel at 2:45 AM

Email ThisBlogThis!Share to TwitterShare to FacebookShare to Pinterest
Labels: worldcup2010