UPDATED  While I have distracted by other activities, chavismo has been diligent in voting stuff that should in theory ensure that Chavez retains power no matter what happens at election time.  One of the things that has been pushed actively has been the "Poder Comunal", or commune power which in theory consists in bringing direct "democracy" at very local levels so that the neighborhood assembly is the one deciding on many things.  I suspect that I will have to come back to subject this quite often so I will make this a simple introductory post explaining how the new system will result on Chavez obtaining more power than what he already has.  This is done with two slides.


Theoretical power structure according to the 1999 constitution

Although the 1999 constitution is far from perfect it respected at least the conventional norms.  For the sake of the discussion I pretend to believe in the separation of powers.  The executive is divided in two portions which together represent the main power of the constitution.

The people, "El Pueblo", elects directly the executive and legislative branches which rule over them.  El Pueblo also influences the election of the judicial power but that one is ultimately carried on by the legislative.  If the judicial power has a direct interaction with the legislative work (laws are usually checked in with the TSJ constitutional chamber), the Judicial power is supposed to act on all powers and "El Pueblo" with equal objectivity and strength.  We know that it is not the case, but again, I am simplifying for the sake of the argument.

The objective here is extremely simple: atomize the power of the people and make it more dependent of the executive.

General considerations first: the proposed laws are illegal because the constitution does not allow for the creation of "comunas", communes, as the smaller territorial unit is the Paroquia, parish, which is created by the municipal council as needed.  The regime is using a slight ambiguity, taken out of context to operate what is in fact a major change in the constitution.  The objective of these laws is to create a myriad of communes, we are already in the 30,000 I understand, and link directly each commune to the central government, bypassing all levels of local governments such as Governor or Mayor.


So, what happens exactly?

Any community or "social group" can form a "comuna".  In general terms a comuna represents between 1 and 2 thousand inhabitants, or a few hundred hearths at most.  In turn comunas ally themselves to form bigger comunas, still below municipality size.  These comunas can apparently go beyond municipal limits since supposedly they all will  have very differentiated functions (first consequence: potential for anarchy and endless legal battles as to who does what and is responsible for).

The first catch here is that any comuna formation must be approved by the executive power through the specialized ministry.  Already  we hear of many such requests rejected on the flimsiest of motives, the more so if the comuna is not lead by pro-Chavez folks.Thus form the start the added democratic value is denied since people can "spontaneously" form their comuna only if it passes government criteria.

The functioning of the comuna is open debate and public vote.  In fact I understand that even the election of the comuna leaders can be open vote if the comuna wishes it so though I think they will retain secret ballot at least at that level for the time being.  But it really does not matter because the debates will be public and the votes on measure will often be public.  Who is going to vote against the chavista members preferences as they are witnessing the public votes?  In the country of the open political discrimination dating from the 2004 Tascon list you can simply be dismissed from any public job as the news of your voting pattern reaches your superior at work.

This is an essential point because the ministries supervising the comunas have complete discretion as to which project they will finance.  Already we have plenty of examples of comunas not in chavista hands who get no financing for their community project whereas incomplete or unreasonable proposals coming from pro-chavez comunas have little trouble getting financing.

With this being said we can now look at the second slide.

Since there are still many imprecision I am offering my best guesses, very afraid that reality will be much worse than I present below. (the government is of course well aware that all of this is unconstitutional and has not decided yet which will be all the "legal" excuses they will be making, thus making a final graph impossible yet). 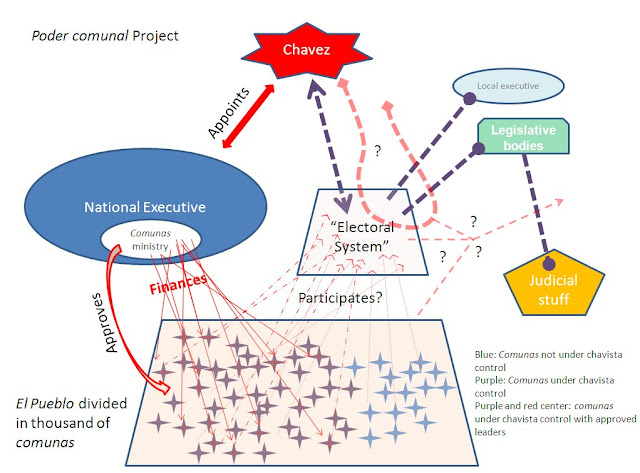 Let's start by the bottom of the slide.

El Pueblo is now chopped into three group of comunas, those who are in the hands of the "opposition" whatever that will mean in the new system, those that are in chavista hand but not necessarily the approved leaders and finally those that are controlled by chavistas in perfect harmony with the responsible ministry.

All comunas must be approved by the ministry.  Thus few non chavista will be approved and that number can only grow after internal elections.  A long process in the best of times, the more so when a comuna loses its financing.

This comunas will participate in some form of electoral process yet to be determined, and certainly not decided before September 26.  Thus we do not know whether we will vote directly or if we will in the end vote through our local comuna.  The possibility for a two degree (or more?) voting system is now a real risk, as there is also the risk that candidates must be approved by a set of comunas.

Since the comuna system will now not be dependent on the National Assembly nor the local authorities (observe that I have removed the "interaction" arrows from the first slide) its only influence on authority is in voting for the president, Chavez preferably.  Thus we get not only a strengthening of the executive power (the others are now smaller and paler than in the first slide) but we also get an actual separation of Chavez from the executive as the supreme authority who can possibly use the "electoral system" to influence the comunas votes when local authorities and the other powers of state are chosen.  I will remind the reader that the head of the TSJ, Luisa Estela Morales, is already on record stating that the theory of separation of powers is an outmoded bourgeois theory.  Thus the dashed pale red arrows which announces the influence of the executive or its controlled comunas in the selection of all other authorities and offices.

In other words the real flow of power will be Chavez, the executive, toward the comunas without these ones being able to change anything unless they change the president.  Is this possible?  In theory yes, but in practice no.  Chavez or his designated successor will control fully the funds of the state and distribute it only to its faithful.  Any non-chavez organization will be woefully under funded and thus will be very hard pressed to launch the candidate selection process and the electoral campaign that follows.  This will be aggravated by the fact that the comunas will be very unequal, those receiving chavista funding being able to exert much more influence than those deprived of funds (the reason why I put faint and not so faint arrows coming from the comunas).  And let's not discuss the difficulty to organize thousand of comunas for a single political goal against the other thousand of comunas directed from the executive power.....

The conclusion is inescapable: the so called increase in democratic participation is simply a way to atomize any people's power so as to strengthen the power of Chavez.

Will it work?
No, not at all, or at least not in the theoretical intention.

The reason is very simple: managing such a complex system, if one wants it to succeed its "noble goals", requires thousands of good to excellent managers and the revolution of Chavez has demonstrated that it is absolutely unable to attract such people.  The recent examples that confirm this range from the thousand of tons of food lost to the utter failure of the nationalized companies.  And I am generous in assuming that Venezuela posses the managerial staff needed in case chavismo were to find a way to attract them.

It is thus clear that the objective of the regime is not to improve the lives of the people by allowing them to take their own local decisions (which they sort of do anyway already in many areas as public power and services are collapsing).

The real objective here is a two step process.  In the first period of application the regime will create a parallel administrative system that will bypass and make irrelevant the National Assembly and the local elected authorities.

Once this is achieved and once the new comunal system starts failing, many of these comunas will be only too glad to place themsleves under appointed administrators that will manage several comunas at once.  Thus the elected mayors will be rendered effectively void and eventually disbanded as an institution.  The governors will follow though that might be trickier to achieve.

But the real final goal sought here is to create a set of small communities that can be easily monitored for political dissidence.  This was already tried several times under the regime, from the "circulos bolivarianos" to the "cooperativas" and soon the "consejo de trabajadores".  This one is the latest attempt and the one with the best chance of success as it is close to the Cuban CDR.  In addition it comes at a time of crisis when it is hoped that many people will be willing to give up the fight as long as food, shelter and a job is the prize to support Chavez unconditionally.  Unfortunately this will not work as such a system does not generate wealth, it only spreads the misery in a more even way, if you are lucky.  The success of this system will make the social stability of the country depend more than ever on oil production and prices.  But this eventually will fail no matter what as the population increases as well as it needs.  And this system will be too hierarchical to evolve and respond to the challenges of the modern world and develop other sources of revenue than oil rent.

The end result will be a repressive state which bases its repression information network on the comuna leaders.

UPDATE
Courtesy of a reader, NicaCat, that read Tal Cual early, there is this fantastically appropriate cartoon of Weil today
In Venezuela the particularly obnoxious chavista that applauds any, ANY of Chavez utterance, is called a "foca" because in the circus the "focas" (sea-lion, otariid and other assorted pinnipeds) were trained to applaud on cue once they placed the ball on their nose.
Posted by Daniel at 6:50 AM