A most undemocratic moment: a National Assembly passes the relay stick

There is so much wrong going on tomorrow National Assembly installation that one does not know where to begin with.  We are leaving a Nazional Assembly that has been screwing the country for 5 years and in exchange we will possibly get what could be called soon the non-assembly since it has very little to do for at least 18 months.  Let's try first with the incoming assembly and show how unrepresentative and how undemocratic this one is.

First it was elected under an obscene gerrymandering system coupled to an obscene electoral cheating before the election which made any real political campaign an uphill endeavor at best.  To make a long story short (read the tag 2010 elections for detailed explanations) we just need to look at the graph below.

This graph is one representation of the electoral cheating.  With 48% of the vote chavismo's PSUV missed the 3/5 majority by one single seat.  That is, with 48% of the vote chavismo got 60% of the representation.  That is OK in a parliamentary system where majority is the goal accepted by all parts, but it is not OK in Venezuela which is a presidential system where the constitution demands a reasonably close proportional representation.  That is, for those of you dense enough or chavista enough (same difference), with 48% of the vote you should not get more than 52% of the seats.  And this if the opposition is deeply divided, which was not the case as it got 47% + crumbs of which 4% were PPT.

If you look at the table you will observe:
If looking at that you still think that there is nothing wrong with the Venezuelan system, then you need to go back to school and review your arithmetic, or at least take a remedial class in philosophy of the objective object.

Thus item 1, the incoming assembly is not representative of the country in a way mandated by the constitution but perverted by electoral manipulation.  As such it starts as an already illegitimate if "legal" chamber.

And yet this was not enough for chavismo who figured out an illegal lame duck session in finding ways to gut the incoming assembly of even the power of debate.  Item 2 of the agenda was that elections were unconstitutionally held early, late September, when they should have been held the first Sunday of December.  That lameduckness was long enough for chavismo to design a remedial strategy and implement it.  Through this strategy chavismo got an enabling law that pretty much takes away at the very least 50% of the legislative activities of the new assembly for 18 months.  And thus we get to item 3 where an outgoing assembly rules on the activities of a freshly elected assembly, just as if you were a tenant but when you leave the rental you manage to establish rules on the next tenant rather than the landlord doing it!!!!!

But this is not all.  More laws where passed to diminish the role of the new assembly.  One was that the rules of the incoming assembly were changed by a parliament that had only a few days left of existence!  In these rules the number of sessions will be limited, the time of discussion and debate will be limited, the voting of the representatives will be limited to party rule.  And thus item 4 is a next assembly that will have trouble to operate in the already limited scope it will have starting tomorrow.

And yet that is not all.  A few additional laws were voted in the name of a rather nebulous  "communal power" that does not exist in the constitution, that was rejected when proposed as a modification of the constitution in December 2007.  Item 5 is thus a set of unconstitutional laws that have as a goal to take away from the new assembly its role in distributing funds to the different states and town-halls and diverse projects.  Those funds are now for direct distribution by the executive power to whichever "communal power" it wishes to do so.

Finally, the organization of the new assembly leadership and its declared intentions are practically unconstitutional in that the avowed purpose of that leadership is to minimize as much as possible the role of the assembly.  The new chair of the assembly is an ex guerrilla, a failed guerrilla at that who has never held elected office, who has no parliamentary experience and who has declared that legislation should be done by "the people" directly and that the role of the assembly would be, we presume, to vote yes or no without discussion. 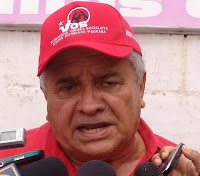 That new chair,  Fernando Soto Rojas, is in fact elected in a rather unorthodox and maybe unconstitutional way (but for once I will give chavismo some slack as many representatives from both sides have not been elected as the constitution says).  Soto Rojas run for the PSUV primaries in Caracas and WAS DEFEATED!  It was Chavez who rescued him and sent him to run in Falcon state where he does not reside, and at the top of the ticket thus ensuring his election even if the docile chavista locals had no freaking idea who Soto Rojas was.  And thus our last item, 6,  for our case on how undemocratic tomorrow's democracy high point will be since I am sure most of the readers will concur with me that in theory the election of a legislative assembly is understood as the highest democratic exercise.

This item 6 is not only reinforced from a speaker who proclaims high and loud that he will minimize the role of the assembly over which he will preside but the other two feet of the leadership are hardly any better.  The first vice president will be Aristobulo Isturiz who at some point passed from a democrat form the left to the point of being in cold terms with Chavez in 2000.  Since then he has thrown his lot behind Chavez all and all, to the point of arguing on a variety of anti democratic measure such as removing state legislative assemblies.  Aristobulo has embraced all sorts of unconstitutional actions and executive power clear abuses.

But at least Aristobulo has the merit of having won his Caracas district, because the second vice-president is Blanca Eekout who was parachuted in Portuguesa in a safe seat even though she has little idea what Portuguesa is all about.  But Chavez needed the activist in her as she has made a career of attacking freedom of expression, of declaring that the only real news are the ones that come from the states news agencies and such assorted actions.  As thus she will be diligent in monitoring the oncoming opposition representatives trying as hard as she can to silence them.

There, you have been told in full.