No electricity? No problem! Have a free day, but dress in red! 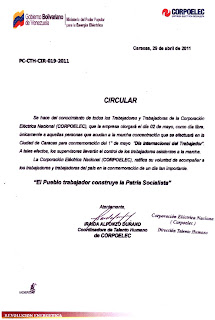 Gustavo Coronel publishes a memo that was circulating yesterday in the offices of the electric utility company of Venezuela, CORPOELEC.  You know, the company that brings you regular power outages all across Venezuela, though less in Caracas because, you know, the higher up of the regime cannot be inconvenienced.

My translation of the memo, signed by a certain Iraima Alfonzo Durand, Human Talent coordinator of CORPOELEC,  You cannot make up such titles...

We bring to the knowledge of all workers and workeresses [word coined by the editor, following the character of the bolibanana official address code] of CORPOELEC that the company will grant May 2 as a free day only to those that will attend tot he march of May 1 "International Labor day".  To this effect supervisors will monitor participation at the march.


CORPOELEC ratifies its wishes to accompany its workers in such an important date.

So there you have it, a true measure of the "spontaneous" workers participation at the Chavez party march which, we are told, will also serve as the official launching of Chavez reelection campaign,  As if we had not noticed already tha the has been in campaign since last October....

No need to comment further, but I cannot resit to ask the question: what will happen to those that either chose not to march or prefer to march with the trade unions?
Posted by Daniel at 1:13 AM