Idiots in the net, putting all of us at risk: MacMaster and his fake "Gay girl in Damascus"

This week grievous damage was done against all of those who have put their life at risk by blogging against any form of oppression.  I am not talking of people like Yoani Sanchez who is now a star in her own right, or even to modest activists like yours truly who signs with a "non de plume" but who has revealed his true identity and face to many of the people that interviewed him over the years (there are many reasons to use a pen name and not necessarily to hide, simply to separate public from private life).

No, those that have been put at risk are those in the trenches where they are forced to remain anonymous because they actually can subjected to all sorts of horrors.  Yoani is semi protected in Cuba because of her acquired notoriety, and in Venezuela those who blog are still living in a country where death squads do not descend regularly to silence voices (though it has started to happen to established journalists and even to a couple of ferocious twitterers).  But in Syria or in Iran, the dangers are an everyday reality and blogging or tweeting is a risky activity, if you have access to it.  Thus the damage made by that asshole of Tom MacMaster, a misguided soul if any, inventing the character of "Lesbian Girl in Damascus" fooling even the Washington Post (and many bloggers like this one).

That the reality of Syria was not invented is no excuse.  What MacMaster has done is to handle for free a powerful propaganda tool for regimes like those of el Assad or Qaddafi, or the theocracy of Iran, or even the kleptocracy of Chavez who now can claim that people like me are agents of the US, paid for, and not even Venezuelan citizens because, well, they write in English and they espouse different values than "el pueblo" or whatever you call "el pueblo" in Arabic languages.  True, people who know better are not fooled but the hoi polloi will take such things at face value and applaud the mercenaries like Eva Golinger when they make a case against "dissidents" as on the pay roll of the NED. 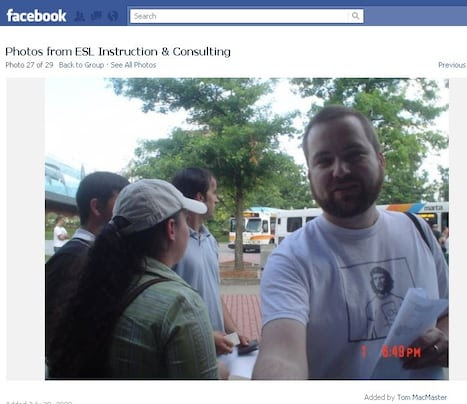 What can we make of Tom MacMaster, who apparently does not seem to have an idea of the enormity he has done while vacationing/working in Istambul?  (1) The picture that the Post gives us of him is distributing fliers and wearing a Che t-shirt.  The irony of it all, you may say, but also the downright confusion that reigns among many, too many Western "activists" who have no solid foundation as to world history, political and doctrinal differences and probably not much understanding about what are the foundations of a true democracy, starting with the texts of Locke and Montesquieu.  Only thus can we explain that a creep like MacMaster finds it acceptable to protest Syria, to invent a lesbian half Syrian woman, while likely defending the Cuban revolution which kills as many people as the Assad regime.  And along the way fucking up serious bloggers who have done their solid work for years and who must spend an evening attacking MacMaster before some idiot chavista a la Golinger starts writing bullshit elsewhere.

Unfortunately in this early XXI century people like MacMaster  might be the norm rather than the exception.  I am thinking namely of the "indignados" at the Puerta del Sol who are finally lifting their occupation.  Their crusade was tinted from the start with ridicule.  After all, Spain had been in a crisis long enough that they should have started preparing themselves politically earlier.  Also they tried to influence the coming election by decrying them.  But abstention was not particularly high and the majority of Spaniards voted for the status quo that they so decried.  They demanded, among other things, participatory democracy without participating themselves in anything.  Heck, they could have supplemented their knowledge watching how participatory democracy has evolved in Venezuela where only one man today can participate in decision making.

It is just a matter of taking the wrong turn. People like MacMaster and Eva Golinger are truly cut from the same fabric and their capacity to do damage around is boundless because of a society that is only too willing to listen to entertainment in lieu of news and ends up confusing both.

1) The Post, egg covered face, also tells us that this Syrian invention of MacMaster was created early, that he used her to stimulate debate in some forums he participated in, debating himself.  When chavistas used to visit opposotion blogs, do you remember how often they took different identities, probably on occasion even with a pretense arguing between two of their identities?  What we need here is people like MacMaster visit psychologists, urgently.
Posted by Daniel at 2:48 AM