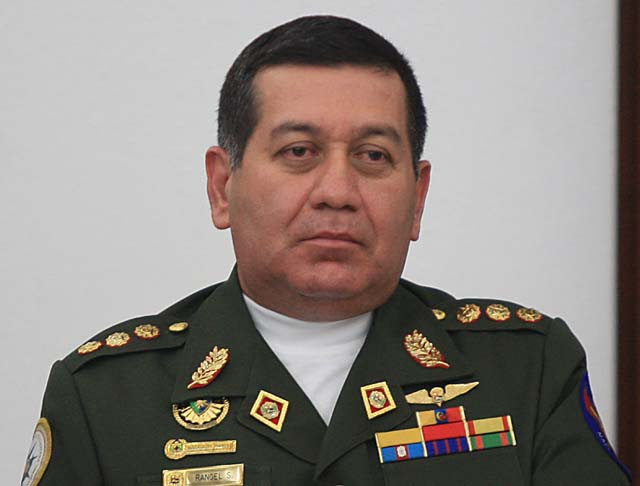 Not that it is a real surprise but Rangel Silva has been appointed a few minutes ago defense minister, of all places during a religious ceremony at the Basilica of La Coromoto, Venezuela's patron Virgin.  although it is in the pattern of naming Diosdado at the National Assembly, that appointment of Rangel Silva is considerably more important.  Let's see why:

First, Rangel Silva is the general that said a few months ago that the Venezuelan Army would not recognize a president elected against Chavez.  That is, just for that simple sentence he should have been fired, or send to retirement or at the very least fined.  Instead today he becomes Defense Minister of Venezuela, the one that will be supervising the October elections which are monitored by the army (a defense minster usually lasts between 1 to two years in office, traditionally).

Second, Rangel Silva has been accused of being associated with diverse drug trafficking rings, even by the US, something that already EFE and ABC remind folks in Spain. Thus, the very least we can say is that his reputation is questionable and that his good name should have been cleared before such an appointment, and cleared not only because "Chavez said so".  For example a detailed retraction of Makled could have helped.

Thus, what is the message here?

Chavez is weak and needs to project force and determination.  Thus he names unpalatable people in high offices, people who in an after Chavez would have a lot to lose and thus have today a lot to gain, or to preserve as the case may be, in supporting Chavez no matter what.

In other words, if you are corrupt, if you do dirty business, if you are intolerant, if you are undemocratic, if you are [fill in negative epithet of your choice] you will be praised and compensated as long as you do all of that in the name of Chavez.

The target is the military who may think that Chavez time may have run out, those bolibourgeois oligarchs who think that maybe financing the opposition campaigns may help them retain their newly acquired fortunes.

Of course, this is not a message to gain votes, Chavez is now beyond that.  The message is to scare chavistas to shape up and put up.  But it also has an intended effect with the opposition, to dishearten it.  Indeed, what is the use to campaign for the election if Chavez has all these thugs that are going to make electoral fraud; and beat you up if needed?

UPDATE:  Miguel has not covered that issue yet but he tweets.  Here are the two links he gave: one referring to Rangel Silva when he was offering money to Antonini (the 800,000 USD luggage, remember?) and the other is the official US communication as to Rangel Silva being in the shit list.

So there, you know that crime pays in Venezuela.

UPDATE 2: Diego Arria did write a letter to Rangel Silva two years ago.  There is no excuse, this appointment is a deliberate strategy of Chavez.
Posted by Daniel at 1:53 AM