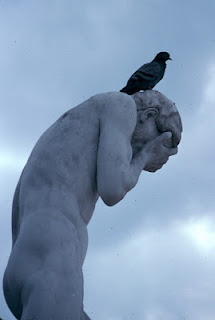 You need to live in Venezuela, on a day to day basis, to really feel that heavy atmosphere.  You need to battle for the paperwork so you can keep your business open.  Along the way you notice all the sharks roaming around you and demanding more and more of your time and money as they know their days are counted.  You need to go grocery shopping often enough to acquire certain reflexes such as piling up your favorite brand on the rare occasions you find it on the shelves.  You learn to have a 1 month rotating stock.  You need to face everyday the destroyed infrastructure, not only the roads and the constant power outages, but even some private institutions that simply do not make enough money anymore, or cannot find the right people to fix their own crumbling problems.  For family problems I had to visit one of the top three private clinics of Caracas, the one I was when dengue fell me two years ago, and I could observe how in two years service and structure had declined even though prices went up.  Simply put, you cannot get your stuff fixed, your car, your clinic, your business because there is always something missing: personnel, cement, pipes, spare parts, etc...

But these are not enough to give you that sense of fin de regne.  After all, such things happen in a lot of countries at war and today in Venezuela you still can mange, your real and present danger being going out in the streets and face the crime wave that shows no sign of abating.  No, what gives you that feeling of end of times is that you are getting used to your situation, that you know that under the current situation there is nothing you can do, that you know it cannot last forever but you have no idea when it will all end.  So you muddle everyday, trying to avoid as many pitfalls as you can, staying alive.

We do not need to discuss the health of Chavez.  All evidences, all secrecy, all staging by the regime point out to his coming demise.  In fact for the first time I am daring to predict that he will not make it to October 7.  Dead or barely alive but he will not be able to run for election.  Until a few months ago I wished Chavez the best of health because I wanted him badly to lose in October and even more badly to see him on the accused bench.  But now the decrepitude of the country is such, the inner collapse of chavismo so obvious that I think that no matter what, it is better for the country that he dies A.S.A.P.  I do not mean to sound harsh or wish him ill, but the situation he has created is good for no one, not for me, not for the opposition, not for chavismo.  All sense that he is playing us with his disease and the resentment that will start building on that will have dreadful consequences, even if he were to suddenly recover.

I was comforted on that though after the Aponte Aponte scandal.  He did not reveal anything we did not know already, that the judicial power was in the hands of Chavez and that he used it to punish whomever he wanted to punish.  We also knew of the extraordinary leniency of such power as to drug trafficking having allowed a significant portion of the armed forces of Venezuela to transform Venezuela in a narco state.  What he added to what we already knew was the ease at which the regime lived its day to day in such miasma.  See, Aponte Aponte had no regrets, he confessed to save his hide, because he felt "betrayed", because he knew very well that he was going to get gunned down any time.  such people need to be removed from office fast, and the death of Chavez will accelerate that.

The picture of the regime that has emerged since early this year is of an emptying  shell already crumbling.  The regime is way more corrupt than we ever thought it was.  The regime is way more divided than we suspected, and the inner war is to death, literally.  The regime is so out of mind, so transformed by its own paranoid brain wash during the last decade that it creates hypothetical exits that would be unacceptable in the continent such as a military coup putting in charge the narco generals; or that a crook like Diosdado Cabello could actually win a presidential election.  The continent has accepted Chavez for a variety of reasons but after so many years of bullying it will not accept just any successor pulled out of a hat, or a military cap.

But on the other side there is little hope.  The opposition candidate promises that he will fire no one from the public sector.  He promises that the price of gasoline will not be increased.  He promises that he will go to Miraflores and work as if nothing with all the thugs that chavismo will leave behind, assuming that they recognize his victory and allow him to take over.  Of course, all of these are electoral lies because even Chavez will have to stop hiring and will have to increase the price of gas.  What worries me here is that the magnitude of the lie makes me question whether the Unidad is aware of what is ahead of them.  With such a campaign they may win but they will not be able to rule and the country may even slide faster into abyss and civil war.

I understand the need to win the election but I do not understand the pretense that nothing will change, that nobody will be punished.  And that is yet another hallmark of fin de regne since when the king dies a regency comes over and is often even more corrupt and incompetent than the departed king favorites.  Though at least in the case of Venezuela this may not happen: what will happen is a tentative of the regime to perpetuate itself though any outrageous populist measure and military strength if necessary.
Posted by Daniel at 6:22 AM