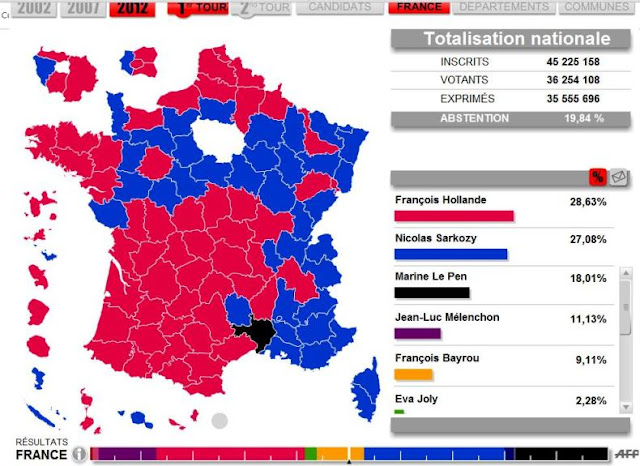 
What is interesting in this map is the extraordinary regionalization of the vote, to an extent that I do not recall having seen in a Presidential election.  Except for two exceptions, the South and South West are solidly for the Socialists, who have also transformed Brittany in the West in their bastion, Brittany who was very Catholic voted right wing solidly until the 80ies.  The right has switched from its Western bastions into a crescent swath that is only punctured 4 times (the North is socialist ancestral grounds).

The second map below is basically the same but I wanted to show how smooth Liberation is.  I click on the Gironde department, the largest of France and the one perhaps most representative of the new economy: tourism, trade, gourmet food.  Not to mention of Bordeaux, a resurrected splendid city now a World Heritage.  In Gironde, Le Pen is down and Hollande is up and the prosperity and renewal do not seem to have helped Sarkozy at all.  But pale pink Gironde has quite a story, and when you double click you get the results for ALL municipal districts.  ALL, barely a few hours after the vote.  And results, not trends as the Venezuelan CNE left us in the 2007 referendum to this date. 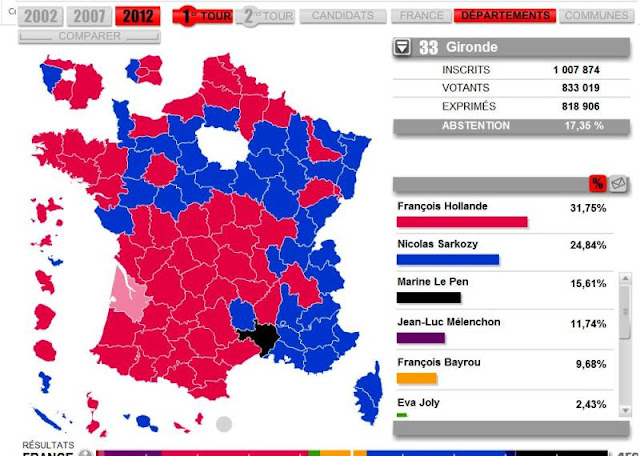 The map below is the blow up of Gironde.  I clicked on the biggest district, Bordeaux, which are thus the numbers you read. 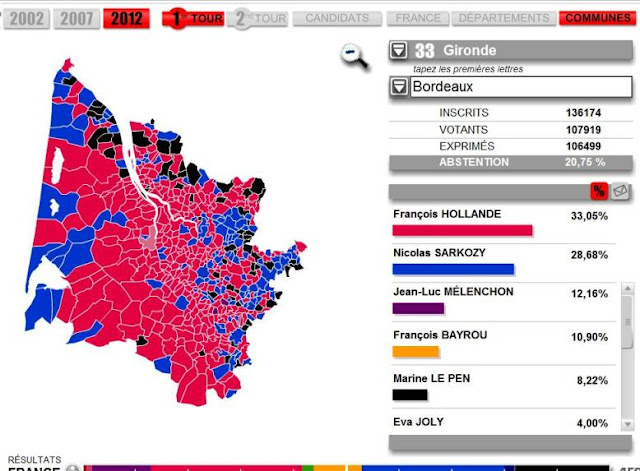 And there you can see that solid pink Gironde is quite regionally divided too.  All the tourist and resort areas, and the agricultural areas to the East are mostly Sarkozy.  Industrial and commercial Garonne valley with Bordeaux are more solidly pink.  But the extreme right of Le Pen draws a strange border area crescent in black, even disputing control of the major Bordeaux vineyards of Medoc to the Socialists!  Though in educated and cosmopolitan Bordeaux Le Pen is further down.  My best guess for that black crescent is an anti European feel more and more found in French traditional agricultural regions.

And perhaps more than any other map this one symbolizes the problems of the traditional Gaullist democratic right, the one that created the welfare state in the 60ies and 70ies (it was NOT the socialists who created the French welfare state even though they did plant the idea in the 30ies).  The Socialists are not strong, they are beholden to the former communists under Melenchon to ensure a ruling majority.  The problem is that the right keeps weakening and that now the Front National is getting its historical best score ever with 18%. I have a nagging feel that Marine Le Pen will play the Hollande card.  Indeed, a Hollande government dependent on the tax and spend Melenchon people will likely fail and the Front National in perhaps less than 5 years form now will have a shot at beating the traditional right.  Its real goal, if you ask me.

What does this all mean?

Well, Hollande is about to win but what may turn out to be a useless victory.  It is quite possible that Melenchon and Le Pen are going to gamble it all in the parliamentary elections of late May and as such we will get a hung parliament.  Right now Melenchon has announced he will support Hollande without conditions.  But if Hollande wins, on the very next morning Melenchon will send his bill demanding at least a couple of dozen safe seats for his people and thus denying the Socialists a possible outright majority.  They will be subjected to the constant blackmailing to what are, after all, former communists, barely unreconstructed, dreaming of 6th republic à la Chavez.

If the UMP of Sarkozy (who has promised to retire from politics on the spot if he is not reelected) does a deal with the FN, it is doomed.  And it is even more doomed if it refuses a deal with the FN, risking in this case to lose as much as half of its current seats.  The Socialists are certain to use the double standard that they are allowed to negotiate with former communists but the UMP is not allowed any deal with the FN.  This hypocrite electoral calculation from their part, instead of considering what should be done, namely a grand coalition between Socialists and UMP for a couple of years to take the painful measures by consensus, will only be paid by all of us later, including the socialists.

But let's not get ahead of us, we still need to do that second round and pragmatically the best hop is for Sarkozy to lose by no more than a couple of points.  Any margin as the ones predicted tonight of at least 6 points is sure to send Melenchon and Marine into a feeding frenzy the day after.