The degradation of Simon Bolivar 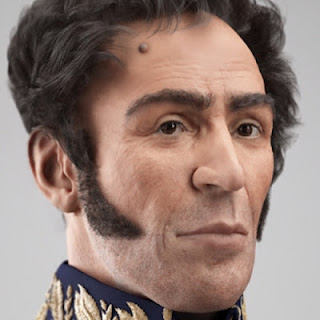 I am not going to get into a lengthy account on how the figure of Simon Bolivar has been further degraded today, on his birthday. Funny @ChavezOfficial makes the best case with his brilliant photoshopping, graciously brought by this blog on the right (look closely if you do not get it at first).

Let's just say that offering the recreation of a 3D image of Bolivar based on his desacrated remains is a poor excuse for such desecration.  Never mind that there is a substantial iconography of Bolivar during his life time that makes such an exercise one in futility.

No, what Chavez is doing consistently through the years is to heap praise to better dispatch.  Nothing is sacred for him: all is changed, reinterpreted, magnified to ridicule or minimized to the grotesque.  The objective is quite clear, even if simplistic and so obviously childish.  There will be only one thing of value in Venezuelan history: the period in which Chavez held us under his boot.  If you still did not get that after 13 years, I hope that this "picture" of Bolivar and the ghastly mausoleum, who is really made for Chavez more than Bolivar, will set you straight.
Posted by Daniel at 4:02 AM