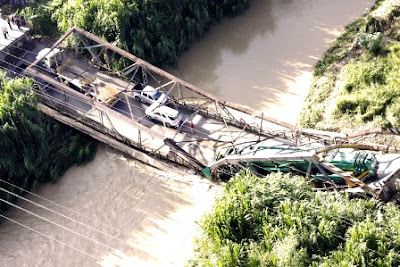 It is fitting that during the heat of his reelection campaign the Cúpira bridge collapsed, illustrating in that simple event all the multiple failures of the Chavez regime in creating a functional country.

I am not going to go into the details and the specifics of the trauma: suffice to say that one of the 10 most important bridges of Venezuela fell because of neglect, lack of prevision, etc, etc...  There is a saying that the human is the Homo genus is the only animal that stumbles twice on the same stone.  Well, the chavista beast has mastered the art of repeatedly stumbling over the same stone. No wonder in Venezuela we use the term chabestia more and more.

Chavismo has been so wrong, so misguided in so many issues that keeping count is now impossible.  Let's just resume some of the dramatic items that the Cúpira bridge summarizes.


INABILITY TO LEARN FROM PAST EXPERIENCES 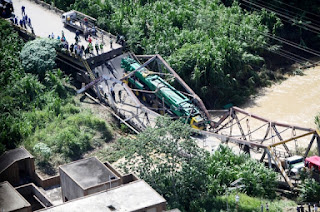 I am not talking here of reinventing the world as chavismo has tried to do; I am talking about the very own mistakes that chavismo has done in its own past, since 1999.  That bridges were about to collapse was reported over and over to the chavista government, to be dismissed, so busy Chavez was fixing bridges and potholes in client states.  You may remember the collapse of the Caracas - La Güaira bridge, the most important of the country  a few years ago.  But that was not the only case by far.  Already bridges in the same Cúpira road to Oriente have fallen.  Many bridges elsewhere also have fallen due to nonexistent maintenance in spite of repeated warnings: in Falcon, in the Andes, in Bolivar, in etc....  Warnings about the Cúpira bridge had been numerous.  I, for one, from two trips to Margarita, can tell you that passing through the Cúpira bridge has been a leap of faith years since at least 4 years ago.

SACROSANCT FAT COWS OF THE MILITARY AND PDVSA; THE STATE OIL MONOPOLY

The bridge final demise was due to its crossing by a 90 plus ton crane when the advertised weight limit for the bridge was half that number.  The pictures are clear, the heavy big green crane could not be hidden from sight.

The bridge collapsed just before it could make it on the other side, and in addition there was an empty platform truck (a couple of tons when empty by itself) plus a couple of tons more from 3 other cars.  Clearly, the old and worn out bridge was tested to twice its capacity.  In other words, no one had even the good idea of closing circulation on the bridge why the crane went through. You can see more details on this Panorama paper article, as usual trying to take the best pro regime spin it can, but unable to hide how fat Jaua has become since he is Vice President.  He went to Cupira on a chopper, bridges are not an issue with him.

First mistake, that heavy crane was going from Puerto La Cruz to Falcon. a long route, a dangerous route made even more dangerous by such a huge crane impeding cars to pass easily. PDVSA should have fret a ship to send it by sea, probably even cheaper than by road. Not to mention that they had all intention to go through Caracas and the Cabrera bridge after Maracay which could have been the victim of the weight with worse consequences for the country.

I bet you that someone in PDVSA has some relative into "transport custody business" and could not resit passing the juicy contract to his buddy/relative even if it meant pissing thousands of drivers, etc....

But PDVSA has become a state within the state and criticizing, stopping a PDVSA truck has become synonymous of betrayal to the fatherland, a treason to Chavez and his idiotic pseudo-revolution. And certainly the corrupt military benefiting from the corruption reigning at PDVSA was not going to stop a PDVSA truck. In Venezuela there are plenty of "alcabalas" on the roads, supposedly placed there to control traffic, provide safety and make sure that truck cargoes are legal.  But we drivers know very well that their only objective is to find suckers like me whose driver license, say, just expired to threaten us with a fine and force us to give them some cash so we can keep on the way.  Yes, alcabalas are manned by the Nazional Guard of Venezuela, the most corrupt and inefficient body of the Venezuelan armed force, already a sad spectacle by themselves.

Between Cúpira and Barcelona there is at least one fixed alcabala and usually one to three mobile ones.  None of them had the idea of stopping such a dangerous convoy before making sure that it was safe for cars, people and bridges?  No, it was PDVSA and that was that.........

NO PLANNING WHATSOEVER FOR CONTINGENCIES AND EVEN LESS FOR THE COUNTRY

The bolibanana revolution is full of promises and devoid of accomplishments.  Long ago I had fun looking about at pseudo list of 25 bolivarian achievements which to this day are almost in the same state as when I wrote on that in 2006.  The sad fact is that not only the regime is unable to plan the development of the country infrastructures, as promised on Chavez willfulness and not on technical criteria, but they are not carried upon (which for some projects is actually a blessing in disguise).  And yet the regime knows from the Vargas tragedy of 1999, to the fall of the Caracas viaduct in 2006, to the floods in 2010 that left large portions of the country incommunicado for weeks, that there is a need for a basic country planning, if nothing else to be able to plan contingency plans.

To this day, after 14 years of rule, Caracas not only is still linked to the world through only 3 points of access (the Santa Lucia road and the Colonia Tovar do not count because there is no way that a massive relief effort could go through these narrow, winding, mountainous roads), but these three accesses are more vulnerable than ever. 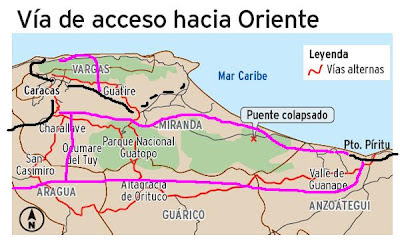 The regime though its page web offers us the lone solace of a map with "other" accesses, all involving twisting roads, in very bad shape in general and impossible to deal with at night.  I have taken the liberty to add in black the 4 lane highway that exist since BEFORE Chavez except that he finished some Km of them, and added what he should have done by now in fuchsia.  Maybe not the one in the Llanos (South of map) or the other one from the shore (above VARGAS).  But there is ABSOLUTELY NO EXCUSE for the Chavez regime in 14 years not to have done the rather easy stretch from Caucagua (after Guatire, where it ends) to Barcelona, instead leaving a two lane roads through which go the biggest chunk of Venezuela tourism and construction material to Caracas, amen of the rest of the trucks that prefer to drive though Caracas than to take the Llanos road because of the ill state of these roads and the danger in driving them.

Chavez has no excuse because the 4 lane highway from Charallave to Píritu was already planned under Perez Jimenez, in the 50ies, around the time Chavez was born.  Maybe in the 60ies or 70ies it was still too early to build it, but since the 80ies that highway has been badly needed and instead Chavez has preferred to build a rail road to Puerto Cabllo that is years from completion and that will solve little.

I think I will stop now, my point is amply made.  But please do note that I used links to my own blog where all of these issues have been discussed years ago, BEFORE Chavez 2007 term started.  During that term there has been NO coup, oil prices have held above 50 USD average, and yet Chavez has done shit on these things which were already urgently needed in 2006.  And he wants to get reelected in October?  The nerve.....

Meanwhile, if you are stuck in Cúpira you can always spend the night there.  Note that if the "alternate" routes do not allow you to reach Caracas on time you have other hotels with the same level of comfort and safety, if you can find or reach them....
Posted by Daniel at 5:39 AM